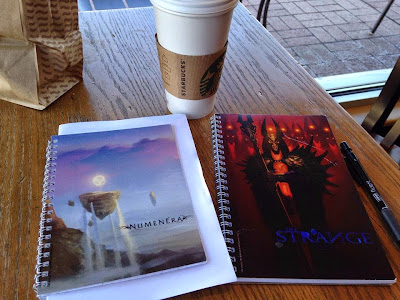 A Taste for Adventure

Oh, Starbucks.  How we adore thee!  If its a Thursday evening, and my mother-in-law offers to watch the trio-of-doom, the very first place my wife and I visit is our local Starbucks.  The sights, the smells, the tastes…

My wife and I are Starbucks addicts, and we're not ashamed to admit the fact.  Yes, we totally understand that we are buying five-dollar coffees, and that its a terribly wasteful habit.  But we don't care, and this is a judgement free zone, FYI.

Besides, this isn't a review about Starbucks, rather its a blog post about using Starbucks in your roleplaying games.

I'll agree that this makes for kind of a strange post, but I committed to running with it earlier today.  Around lunch time I was sitting in a Starbucks, drinking one of my favorite tasty beverages (it was a grande coconut milk latte), just trying to think of something to write about later.  I always carry a Numenera notepad in my work briefcase just in case an amazing idea pops into my mind.

So there I was, sitting with my notepad open, trying to think of something to write…

… and there were NO amazing ideas popping up.

I had "blogger's block!"

But then I started looking around the room and an idea popped into my head.  Quickly I tossed this post on Facebook:

"Sitting at lunch. Thought I'd try to write something... but blogger's block has returned again. Maybe I could 'stat' a Starbucks barista across multiple RPG systems…"

Like most crazy ideas I come up with, this one festered.  I left Starbucks and attended several meetings before heading home from work.  But the entire time (through both meetings and the drive) I kept thinking about about Starbucks from an RPG perspective.  Writing something for multiple settings would be a lot of work for one blog post, but perhaps I could contain all of that caffeinated goodness in one system…

Why stop at a single barista, though?  There are many adventuring possibilities contained within a single Starbucks! 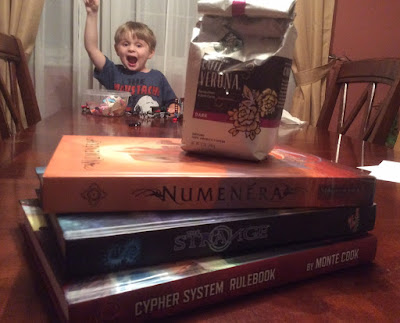 Two years ago this post would've just covered Starbucks in the Ninth World of Numenera, but now that it's 2015, and we have both The Strange and the Cypher System Rulebook (CSR), I've gotta be open to Starbucks across the entire Cypher-verse.  But hey, feel free to use any of these ideas in any way you want.

Or don't use them, because the more I think of it, the more I realize that this is a terribly cheesy idea.  You've been warned.

Let's start with something simple…

What is a Starbucks?

Let's get real, the very nature of Starbucks changes as you go from one game to another.

This really is the easiest path to including a Starbucks in your Cypher games.  Perhaps the fantasy genre is a bit far fetched for a Starbucks, but your superheroes, horror, and modern games could definitely include corporate coffee houses.  Even in a science fiction setting, there is no reason why Starbucks wouldn't spread to the rest of the solar system and beyond.

Numenera is all about the "weird," so I see no reason why you couldn't just include Starbucks in your Ninth World adventures.  To be clear, I'm not suggesting you reskin anything… just throw the actual Starbucks into your Numenera campaign "as is."  You know that massive city of Qi?  I bet there are at least fifteen Starbucks locations surrounding the University of Qi.  There's a really great location in the City of Bridges overlooking the Merchant Docks as well.

Imagine the look on your players faces as their characters walk down the road and run right into that green logo.  What's weirder than that?

I can sense you shaking your head in disbelief and disgust.  But hey, if you want serious adventure seeds for Numenera, you should be following +Marc Plourde not me.

Okay, the meat and potatoes of this section is Starbucks as a recursion in The Strange.  Maybe the reason that there are so many Starbucks locations throughout the world is that each and every one is the same location… the same recursion… but they just appear different to each patron.  So when you walk into a Starbucks in Portland, it's actually a recursion, and the very same location as the Indianapolis Starbucks attached to the Omni Severin.

Have you ever wondered what a barista would look with role-playing stats?  I sure have!  Perhaps you won't agree with my take on these creative crafters of creamy coffee, but that's too bad.

The Cypher System wouldn't be the Cypher System if there weren't cyphers.  These one-use special items take on the "theme" and "flavor" of their home campaign settings.  So in Numenera a cypher is an ancient piece of technology that has one final use left.  In The Strange a cypher is a small snippet of the "god code" that is the alien dark energy network.  In The CSR, a cypher is just about anything you want it to be.

I'm offering you three new cyphers for your campaigns, to use however you see fit.  I guess you could technically reskin regular cyphers into Starbucks-themed cyphers.  Perhaps that mocha frap is actually a Detonation (Web) Cypher, ready to be thrown at incoming hipsters!  That instant Starbucks blueberry oatmeal could function as a Stim, helping your character with one really tough roll.

Or you could skip "reskinning", and go with one of these three items:

I hope you've enjoyed this Cyphering of the Starbucks experience.  If there is any chance that you use any of these weird and crazy rules and guidelines in your game, please let me know!  I'd love to find out how, and more importantly why you thought it was a good idea to follow my advice.