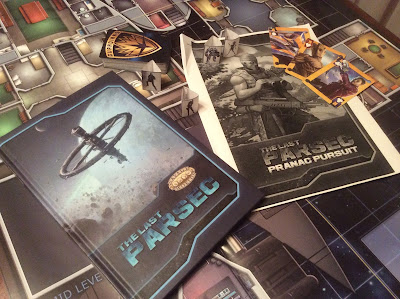 A Bit of Everything

The Last Parsec is not only on my short list of favorite Savage Worlds settings, but of all the settings I own.  As a proud Kickstarter backer of The Last Parsec I received a hefty bounty of rewards.  My shelves and hard drive are full of sourcebooks, adventures, pre-gens, figure flats, and deck plans, all just begging to be played.  As of this past week, after reading Scientorium, I've officially read through each and every TLP product.
So... what's to love?  For me it's the openness and modularity that The Last Parsec provides.  Other campaign settings may offer more detailed backgrounds and complicated backstories.  Dip into familiar space opera games, such as those based on Star Wars, Firefly, or Star Trek, and game masters face seemingly insurmountable volumes of canon material.  While I sometimes enjoy dipping into these sources, I prefer settings that leave me room to play.
This is exactly what The Last Parsec does so incredibly right.  Each of the three initial sourcebooks, Eris Beta V, Scientorium, and Leviathan, provide a single place of interest that can be plopped down in just about any ongoing Savage Worlds sci-fi campaign.  If you have all three, you get a bit of everything.  A star system, an ancient space station, a "dinosaur" planet. The Last Parsec: Core provides material and inspiration to aid GM's in building ongoing campaigns outside of the original settings sourcebooks, while leaving wide open spaces for their own original material.
With all that said, Pranac Pursuit, a complete twenty-three page adventure by Sterling Hershey, just happens to encapsulate everything I adore about The Last Parsec in one single adventure.  It's a bit of everything, with plenty of room to insert your own plots, concepts, and complications.
Last night I had the opportunity to play Pranac Pursuit with some of my friends.  Here are my thoughts...

SPOILER WARNING!  If you have even an inkling that your GM is going to run this adventure for you, it's best that you don't read ahead.
Adventure Overview
In Pranac Pursuit the player characters work for an interstellar exploratory organization known as JumpCorp.  After a fellow crew and their vessel (the Distant Light) go missing in the Pranac system, the PC's are sent on a search and rescue mission.   They discover the missing JumpCorp craft in an unstable orbit around the planet Pranac IV, suffering from a bizarre power-flux that threatened the life support of the craft.  This forced the crew to abandon ship and crash land on the planet.
The missing JumpCorp team are found to be assisting a primitive alien race with their own dilemma.  The native villagers, known as the "Jalur", practically worship a piece of alien technology (a probe), that had been damaged during a raid by a competing tribe.  But when the probe senses the technology of the approaching PC's, it takes off, dragging the missing crew into the sky and towards a nearby mother ship.
The PC's may then explore the local region, discover other pieces of technology as clues, encounter other Jalur tribes, and find clues that will lead back to the alien mother ship.  Once found, the PC's must either disable or destroy the rogue AI keeping the missing JumpCorp team hostage.
As a final added complication, once everyone is off Pranac IV and the missing crew is back on the Distant Light, the PC's must deal with the fact that the "power-flux" affecting the vessel is a sentient electrical organism that seeks freedom.
Tone
For groups that may not typically play science fiction games, Pranac Pursuit allows a GM and their players to experience several common tropes all in one adventure.  A search and rescue mission requiring starship piloting and space walking.  First contact with a neutral yet primitive alien species.  Exploration of a strange new world.  Combating an advanced alien artificial intelligence.  Such a terrific variety of possible scenes.
I should point out that Pranac Pursuit feels a lot like a good Star Trek episode.  The overall theme is one of exploration and discovery.  While there are opportunities for physical conflict, they are rare and often unnecessary.  Conceivably, the entire adventure can be completed without the PC's firing  even a single shot.  It's important to point this out, because this adventure may not be for everyone.  If your group of players prefer to shoot first and ask questions later, this may not be their kind of mission.
That said, it wouldn't be hard to reconfigure the adventure for the latter kind of group.  Making the Jalur more militaristic and armed, or adding terrible natural defenses could completely change the tone for the "rescue".  Page 18 of the adventure offers Encounters in the Rulwan that take place while exploring the planet's surface.  Should your group lean towards fight over flight, refrain from choosing these at random.  Playing up the Molil raiders (rival Jalur) as villains could sate your friends' bloodlust.
Adventure Length
I tried running this adventure in a four hour period, that was somewhat crunched by everyone eating dinner for the first hour while picking characters from amongst The Last Parsec Archetypes pre-gens.  Until we experienced our TPK (total party kill... we'll get to that later), I was figuring that we'd have to skip the entire sequence where the PC's explore the region.  We would've jumped straight to the mother ship.  Pranac Pursuit allows for this kind of flexibility.
On the other hand, Pranac Pursuit could easily turn into a three or four session long mini-campaign, especially if the GM expounds on the exploration of the planet Pranac IV. Other probes could be tossed in, some potentially dangerous, as well as tribal politics could make for some interesting storytelling.
Parting Thoughts
I thoroughly enjoyed reading this adventure, and thinking about all the opportunities provided within.  In less than four hours we barely scratched the surface and the experience felt a bit rushed, albeit with an abrupt ending when the game went off the rails during the interaction at the Jalur village.  When I run this adventure again (which is inevitable, because it deserves a full play through) I'll be aiming for an eight hour window. Perhaps run the game over two or three sessions.
Now that I've covered how this all should've played out, let's chat about how it actually turned out at the table...

Our team of JumpCorp operatives consisted of the following:
For the first part of the adventure everything was going well.  The team found the Distant Light disabled, but managed to tow it into a higher orbit and learn about the whereabouts of the missing JumpCorp team.  They flew down to the surface of Pranac IV, did some investigation, and eventually discovered the Jalur village of Craa.

This is where things went terribly wrong.
When the alien probe took off, dragging one of the missing crewmembers (Janet) with it, Kiff borrowed Chuklani-Gan's gyro-jet rifle and took a shot.  Both of Robert's attack and damage rolls exploded, and there was no way that the probe was still flying.  So it crashed, killing Janet.
The Jalur were pretty mad about this, as was Captain Wu, Janet's teammate.  The Jalur wanted their metal sage back, and the PC's decided to find another one.  Frank had to leave the game early, so he had his character Jody Moonstar stay behind as a hostage while the team went looking for another alien probe.
Jeremy got the idea of using a portable 3D printer to create another version of the alien probe, but the team would have to get a closer look at the crash site for this to work.  When they arrived, they found Janet's body crushed.
With Frank, the group's "voice of reason" gone, the entire party started shifting towards the bloodlust of our new player Robert.  A D&D player who loves barbarians, anti-bards (???) and chaotic evil paladins (is that possible nowadays), Robert may have been a bad example.  My wife Jen's character, Farrah, started taunting Captain Wu, making fun of the fact that his teammate was dead.  This may have been the red wine talking.
Eventually Captain Wu began to fear the PC's, so he ran back towards the village.  So the PC's chased him down and killed him.  Of course this all happened about five-hundred feet from the Jalur village, so they sent all of their warriors (about 100 or so, armed with lances and crossbows), into battle.
I didn't even let the PC's make any rolls, as there was no chance they could survive.  I announced their deaths, and the failure of their JumpCorp mission.
Better luck next time?
*     *     *
So... what went wrong?
It definitely wasn't the adventure.  Pranac Pursuit is superbly written, well plotted out, with plenty of room for GM's to add their own thoughts and ideas.  Going into the adventure, I let my players know that we were going to playing an adventure based on discovery and exploration, rather than killing and looting.  I made the assumption that everyone was on board with this plan.  Even when Robert announced that the only other RPG he had played was "D&D", I didn't take that as he wanted to play The Last Parsec like it was D&D.
Oops.
The other aspect that set us off course was the time.  We had less than an hour left in our game when the team arrived in the village.  There was a lot of time spent dealing with the ships in space and at the crash site.  By trying to rush the game at the end the players stopped asking clarifying questions about what was happening in the game.  My fault.
But in the end, we all had a great time, and that's really all that matters.  So many memories from such a crazy evening... perhaps more than we would've had with a more successful mission.  ﻿
﻿