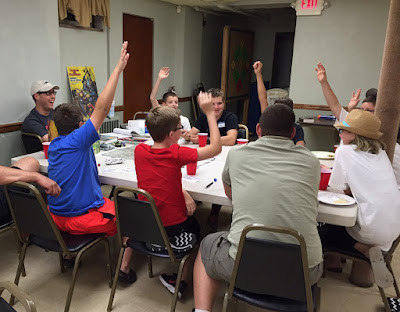 Where are the Pirates?

Wow, what a big evening for the Norwin Game Knights last night!  I went to the event fully prepared to run the second half of +Harley Stroh's Tower of the Black Pearl, following last month's exciting high seas adventure.  Five of my players from the previous session showed up, but then another five arrived looking to play Dungeon Crawl Classics.  Four of the new players were completely new to DCCRPG!  Since this event was part of the 2016 DCCRPG World Tour, I felt compelled to step back and give our new players the full 0-level funnel experience...

I had to think fast.

To help develop a few adventure seeds, I let my players "design" the adventure "Mad Lib Style."  I threw out a few categories and asked for feedback.  My players' responses are in italics:


As all of these ideas were coming in I just started drawing on a map.  I wanted the player characters to be part of some kind of crazy crash site, either in the future or the past.  My brain kept cooking as I handed out characters, explaining the rules of DCCRPG to our newer players.  The only thing I knew I was going to use for sure was some kind of crashed ship.  Either a steampunky airship or maybe a space capsule... the space capsule sounded fun.

In the end I thought the adventure was a hot mess, but apparently my players enjoyed it.  My daughter loved the "Mad Lib" style adventure design, and now I've got a few ideas cooking to flesh this concept out a bit more. 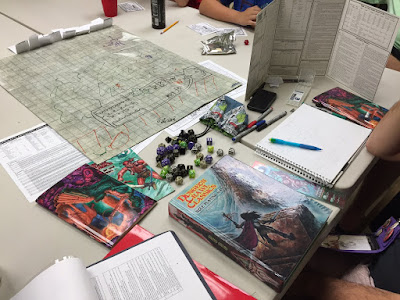 (I went for the "Full Monty" on these characters, drawing from fantasy 0-levels, Crawling Under a Broken Moon, and Purple Planet Earthlings.) 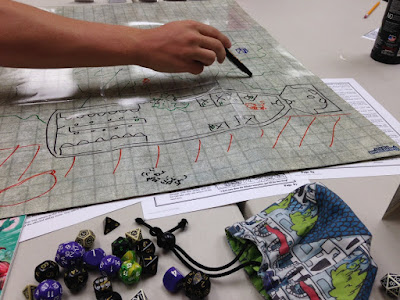 A band of time travelers, just returning from Ancient Egypt, find out that they've won a trip to the delightful world of Centaurus VII, courtesy of a McDonalds giveaway.  With travel agent Susan "The Nailgun" Orion as their guide, they board a "sleeper" space craft with cryopods.   The travelers are enjoying their trip until they wake up in a smashed shuttle craft on an alien world.  Eighteen travelers faced drowning in their crypods, but were able to get free.  There may have been more survivors, but Leon pulled the wrong lever (clearly marked "don't pull") killing the rest by boiling their tubes.

[It was at this moment that I told the players that they could not get new 0-levels if their's died.  They would have to share.]

From the look of the shuttle's interior, the craft had been on the ground for several years, with much overgrowth filling an area adjacent to a hole in the hull. Exploring the shuttle, the characters found a large stuffed tiger attached to a long wire.  It was a lure, used by a Four Armed Shrek Ape outside the craft.  The party battled the Four Armed Shrek Ape, freeing its slave, a human named 665.

Moving forward into the shuttle, Yurislav and Crackle opened a hatch leading to a computer room.  On the screen was Snoop Dogg, who revealed to the characters that they were on a  YouTube Red reality show.  Each character touched their foreheads, discovering implanted camera devices.  Snoop Dogg told the characters to leave the shuttle and find their freedom.

[I used the Crawling Under a Broken Moon Mutant class tables to give out the random mutations.  I tweaked a few to make them more "negative."]

After leaving the shuttle, Crackle climbed up to the roof, pointing out clearings in the distance.  The party leaves to explore the clearings.  En route to one they discovered a fifty-foot long goat-centipede goat... or Centigoat.  It killed Crackle when he force fed it motor oil, but Kippenstein the Ostler was able to befriend the creature.  Now the party had a mount!

Exploring a second clearing the party discovers a glass cube, with a human circulatory system hovering on the inside.  Dmitri breaks the glass, and Tim examines the veins.  The entire system then crawls up Tim's nose, taking over his body.  The now possessed Tim leaves the party.

[I was thinking about the hovering circulatory system from Watchmen in the scene where Dr. Manhattan reformed.  Great movie.]

The next clearing circled an ant mound.  Inside the mound was a pistol, and Yurislav reached for the weapon, only to get covered in ants.  The party douses Yurislav with oil, and Eleven sets him on fire to help defeat the ants.  Dmitiri the Lost Cosmonaut eventually donned his space suit and rolled on the ants to kill them.  Dmitri notices on the inside of his helmet that there is a signal to the north.

[Although not part of the original "Mad Lib", someone mentioned ants at our club event... someone at another table.  I decided to throw it into the game.]

Traveling towards the signal, the party arrives at an old Russian moon landing craft.  A butterfly winged dragon sat atop the craft, asking for a gift from the party.  Eleven offered a piece of mithril, with a promise to help make a mithril candle.  The dragon took Eleven's offer, forced the Elf to stay behind, and let the rest of the team travel off into space.

[I alluded several times to there being a dragon in the area.  While I tinkered with rolling a really quick tiny dragon, keeping the ten players occupied while I looked at the charts became a challenge.  I ended up just rolling a few stats... especially the Earthquake ability... and left other things like the dragon's "spells" alone.] 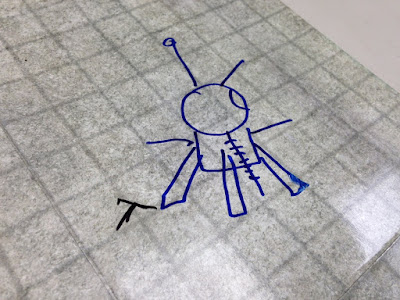 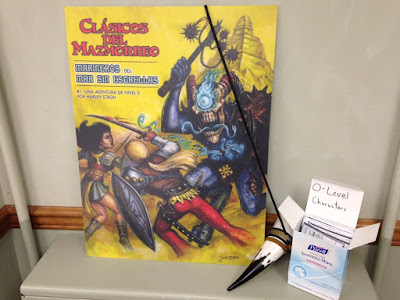