After three previous sessions within The Emerald Enchanter's crazy lair, including a pair of trips back to town to restock and heal up, the party wrapped up the adventure by accepting a payoff to leave. That was it. No big boss battle. No pile of loot. No epic trip back to town, with a bunch of captives in tow.

Nope, none of that.

I guess the village of Ugly Bottom will continue to suffer under the ever-vengeful eye of the Emerald Enchanter.

Here are some of the details:


And THAT is how we finished The Emerald Enchanter! I'm sure your trip was different.

Holy crap, it's been a long time since I've done a blog post! Over a month. Sorry about that. Not that we haven't been gaming... we have. It's just that life, the holidays, family stuff, and work stuff all just got in the way a bit. But we're back on the Purple Planet, where we belong. 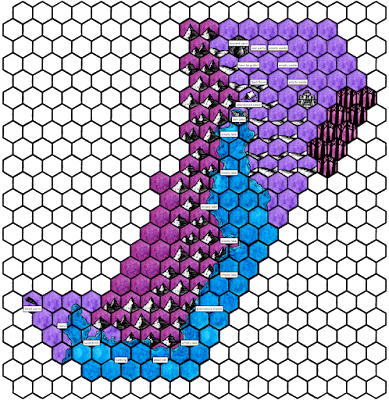 
"James, this is good news! You finally come to Brazil! You don't have the excuse of money." - Jonata.

"The party needs a nurse." - Alex grateful that Andy was playing his Cleric.

"There's no seatbelts in medieval times." - Judge James to Andy, who was asking about safety equipment.

"I'm really screaming now!" - Screaming Otto after getting blasted by the Rayrifle a second time.

"Not quite a colonoscopy." - Paul about digging into the dead death orm.