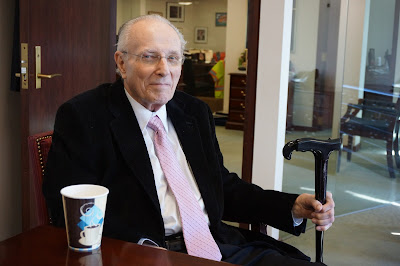 If I ever wanted to blame someone for all my geeky tendencies, I would probably need to start with my grandfather Harry.  We called him Pop Pop.  My very first memories of playing video games were by his side.

I was just 4 or 5 years old at the time. Not 100% sure of when, but I know exactly where: Wildwood, New Jersey.  And we're not talking some vague memories, but rather something very specific.  Pop Pop would take me into one of the arcades on the boardwalk to play two games: Star Wars and Punch Out.  I can't remember which arcade exactly, but there was one of them where the two machines were right next to each other, just near the front.

The Star Wars game was that old one where it was all vector graphics.  I'd hold the weird flight yoke and would shoot lasers at sparkling blaster bolts fired by the TIE Fighters.  I couldn't reach, so he'd have to pull up a step stool for me to stand on.  He'd just watch, quietly giving tips, until it was his turn to play.

Then we'd move over to Punch Out.

Pop Pop was the Punch Out MASTER! If you remember that game, it was the original, where you played as a see-through, green guy. I loved watching him play, and I can't imagine how much money he'd sink in quarters into that game.  Pop Pop's arch nemesis in the game was Bald Bull.  I remember Bald Bull from Mike Tyson's Punchout on the NES, but there was a Bald Bull in the arcade version as well.  I can't remember how far Pop Pop got past Bald Bull, if at all, but he was quite the topic of conversation.

Some time, probably the same summer, we were out in the ocean.  It was deep... well, deep for me... and I couldn't reach the bottom.  I also couldn't swim, but Pop Pop had me.  Well, the waves were hitting us pretty hard, and I remember one of them getting us, dunking my head under water.  I had some water up my nose, and I think I started to cry and that was when Pop Pop made the perfect video game reference.

"That was a 'Bald Bull' wave!" my grandfather laughed.

That image in my mind, of my grandfather holding me safe while cracking a joke is pretty much exactly how he lived his entire life. A steadfast guardian and confidant with an incredibly sharp sense of humor that lasted to the very end.

Here are a few of my other favorite stories about Pop Pop:

To see the full obituary for my grandfather, you can follow this link

Email ThisBlogThis!Share to TwitterShare to FacebookShare to Pinterest
Labels: Obituary