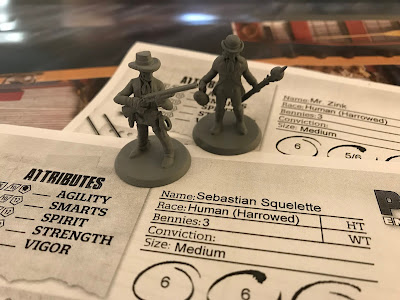 Taking our Deadlands Game into #SWADE


It's been a while since Cooper and I played our Deadlands Reloaded bedtime story. We've been really busy though! Between the holidays, PAX Unplugged, a lot of work travel, a big Christmas Eve extravaganza with the family, and getting side tracked by Super Smash Bros Ultimate, we've been lax on our family gaming. Here's hoping to turning the corner in 2019!

I think our excitement over the new Savage Worlds Adventure Edition will definitely help. We are head-over-heels geeking out about the new game, as well as the new Savages we've found here in the Philly area who share our fervor for all things Savage Worlds. For those folks who wonder about how hard it is to convert existing, Savage Worlds Deluxe campaigns and settings to the new #SWADE rules, let me just say this: it's not.

Seriously, just a few adjustments here and there, and we were off to the races. As I stated in a previous post, we're using Bennies instead of Fate Chips, mostly because I wanted to make the game more friendly for a younger player. I also ditched the Guts skill setting rule, and went just for straight Spirit rolls for Fear tests. After tweaking Cooper's character skills, we were good to go!

Cooper and I wrangled my wife Jennifer into the game. She'd be playing Cooper's sidekick spellcaster, Mr. Zink. No luck this time in getting the other two kiddos to the table, but maybe in a future session. At some point I think we'll have a friend or two of Cooper's join in as well. So far it sounds like he's the only kid in his class that even knows about tabletop roleplaying games. 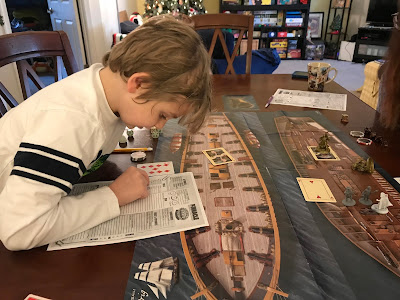 For our third session of this kiddo campaign, I thought we'd playtest some mapping rules that I'm working on for an upcoming Savage Worlds Adventurer's Guild adventure. Still no title, and barely any plot, but for this adventure to work I need tinker with the mapping mechanic. If successful, I'll be able to use the same system to add flavor to just about any ship map. So this week it was an old brig with Deadlands, and next weekend I'll be playtesting again with Space 1889.

The playtest also gave us the opportunity to try out a pair of super-awesome gaming products that we recently picked up: the Dangerous Seas: Fighting Brig map by Chris West, and our new custom Hero Forge miniatures. 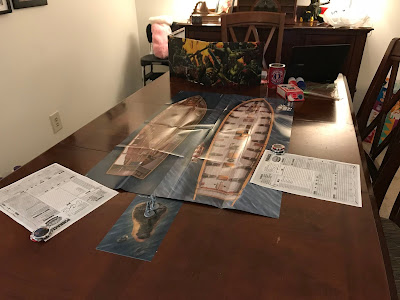 Those of you who read our first post in this series may remember that the character of Sebastian Squelette started out as a Hero Forge creation. So cool to see this guy come to unlife! I promise to paint all these figures soon, but most of them are relatively new, and I just haven't had time. 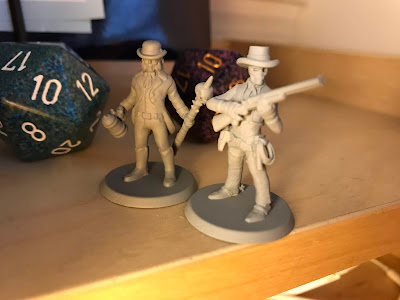 I should note that since the last session, I updated Cooper's character, Sebastian Squelette, for the new Savage Worlds Adventure Edition. I also built Sebastian's zombie-themed, equally harrowed sidekick, Mr. Zink (to be played by my wife Jennifer). 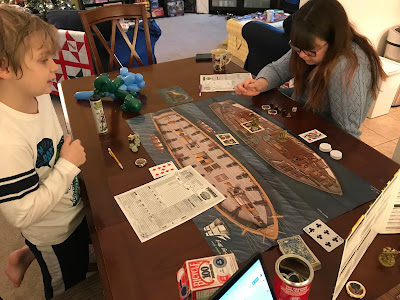 Upon freeing Mr. Zink from Ringmaster Philippe in Dodge City, Sebastian headed southwest into New Mexico, on his way to his hometown of Tombstone. Along the way, Sebastian got word that the Dynamically Dashing Darren, the flashy masked occultist from Pittsburgh, had created an arcane research station on the San Juan River in New Mexico using the remains of an old Brig inexplicably hauled all the way from Lake Erie by dark magic. Figuring that cool magic equipment could be located on board DDD's boat, Sebastian chose to go for a secret raid. 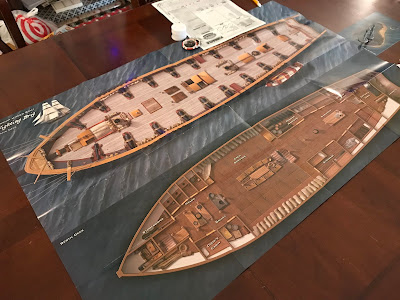 The adventure started with both Sebastian and Mr. Zink on a nearby small island. After swimming to DDD's Brig turned Arcane Lab, the two climbed up onto one of the dinghies and made their way to the deck. A brief gust of wind almost knocked them both off the side of the ship, but Sebastian and Mr. Zink kept their balance. They found all of the doors to the lower deck closed, and decided to stealthily climb down one of the center stairwells. 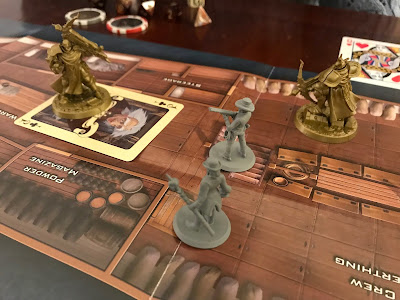 When the two made their way down the port side staircase, they saw a big, metal suit of armor walk by, clutching an enormous crossbow in its hands. It must have heard one of the two outlaws (most likely Mr. Zink, who wasn't being very sneaky), and stopped to investigate. Sebastian decided to climb back up the stairwell, and back down the adjacent one that led to the starboard side of the boat. Again, they saw another armored suit, also pursuing the sounds of intruders. But this metal construct was quite clumsy, and it knocked over a lantern setting part of the ship on fire. 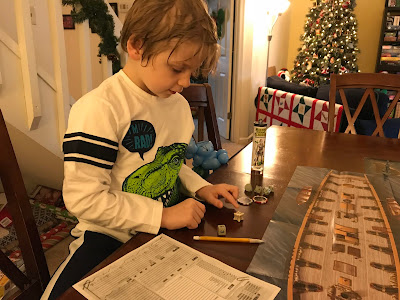 Mr. Zink decided it was time to thin out the armored figures. The Harrowed Huckster snuck around behind one of the metal suits and used a lingering lightning bolt to knock out the construct.

[GM's Note: I really, REALLY like the new magic rules for #SWADE, especially Power Modifiers. When I explained to Jennifer that she could make her augment her lightning bolt so that it could keep causing damage, she quickly spent the extra Power Points. This new magic system is slick, and turns a player character's handful of spells into a plethora of arcane options!]

As soon as Mr. Zink dispatched the armored figure, though, a sinister laugh came from behind. It was the Dynamically Dashing Darren! 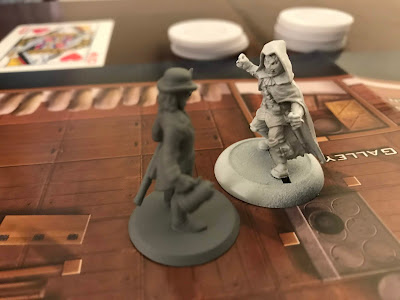 DDD used his pummeling Havoc fists to occupy Mr. Zink, nearly striking the Harrowed several times. Seeing that his friend was in trouble, Sebastian charged over with his trusty shotgun and started blasting away. Despite DDD's exceptional dodging skills, he was no match for the super fast, skeletal outlaw!

Sebastian and Darren traded blows while Mr. Zink burrowed into the ship and got the drop on the second suit of enchanted armor. Even after taking a direct hit from DDD's magic, Sebastian felled his foe. Mr. Zink was not far behind. 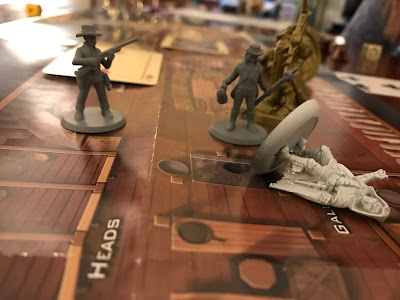 With combat over, the two outlaws worked to put out the flames. Sebastian raided a nearby storeroom, where he had to brave a small swarm of tiny evil monkeys guarding the barrels of water. Fortunately, Mr. Zink's Fear spell scared off the little demons. With the flames finally out, the outlaws grabbed some of the Dynamically Dashing Darren's magical creations and fled the damaged brig for shore. 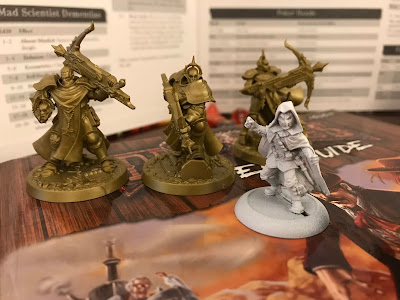