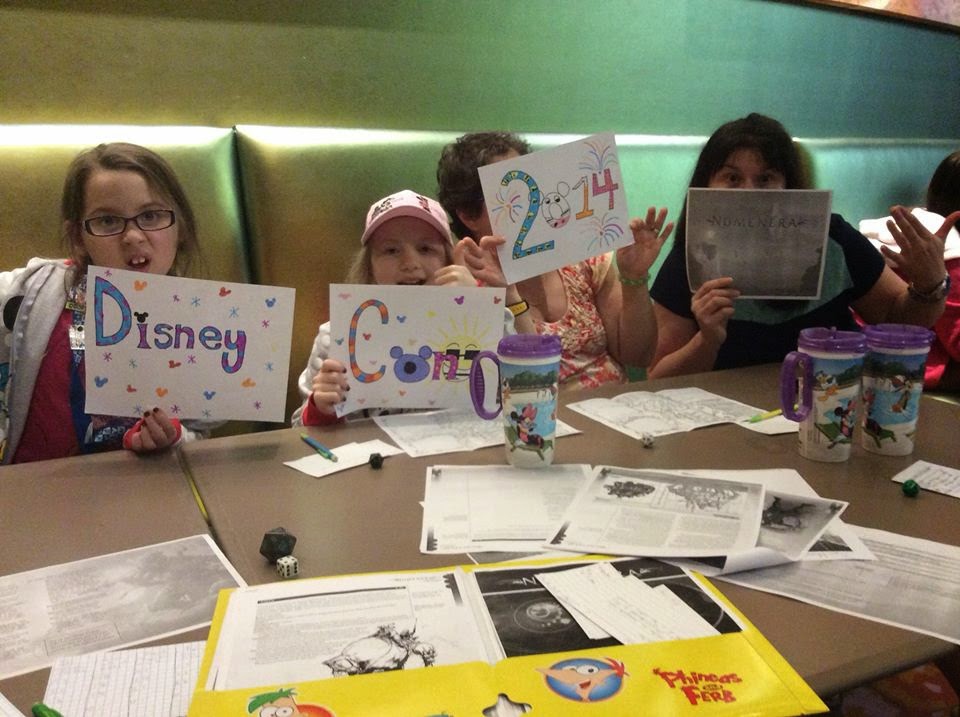 So my mom, dad, brother, sister-in-law, and two nephews are in Disney World this week, and it got me thinking about the last time that I was in Disney.  More specifically, it got me thinking about the crazy and outlandish idea we had to do some serious gaming in the Happiest Place on Earth!  Back in February, while staying at Disney's Art of Animation resort my family and I played a short but spectacular game of Numenera out in the main dining area of our resort.  It was actually our second game of Numenera while in Disney World, our first occurring our first night while staying in our hotel room. 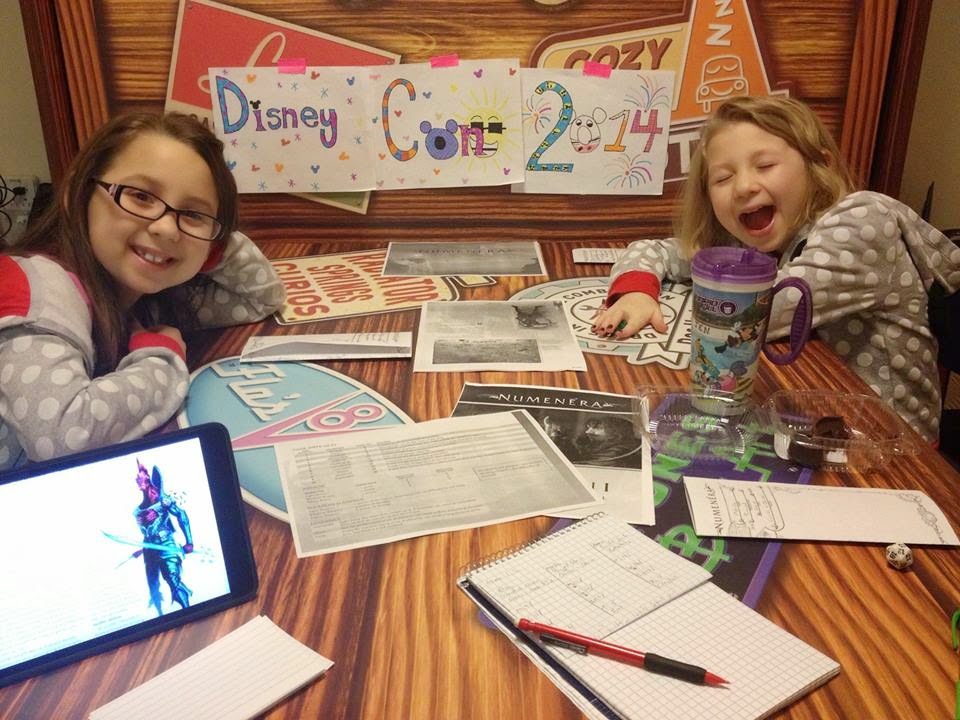 Our first game at Disney

We didn't have many onlookers, since it was pretty late, going on 9:30pm.  But I have to hand it to my kids, they sure are a bunch of hardcore gaming troopers!  It was close to 11:30 when we rolled out of the restaurant, but we were really happy to have the opportunity to play in public.  You can be sure that we'll be doing this again on our next vacation.


Anna, a Swift Jack who Entertains, played by Evie
Elsa, a Graceful Nano who Wears a Sheen of Ice, played by Carrie
Poppins, a Strong-Willed Nano who Controls Gravity, played by Nini
Merida, a Rugged Glaive who Carries a Quiver, played by Mommy

We Need a Nanny


A billion years beyond "once upon a time", and three princesses who had departed from Nihliesh only days before had found themselves entering the snow and sand covered ice-fishing village of Squibbon.  In search of their friend Olaf the cryo-mutant, the trio believed that he must have come through this village as it lay at the heart of the Fields of Frozen Flowers. This particular village was situated right alongside one of the frozen lakes, with skate skiffs, ice skating boats with sails, parked right along the edge of the ice. But the skiffs were not moving and the entire village looked tired and destitute. When the girls passed the first building they add acquaintance with a very properly dressed nano who introduced herself as Poppins. As one with the powers to control gravity, Poppins believed that it was her mission to free the village of whatever dark force was plaguing it's peoples.

The Merchant of Venus was happy to tell the party all he knew of the village. Legend had it that Squibbon was first founded by intelligent land squid, who built most of the village long before humans arrived. Even so, no one had ever seen one of the land squids, not even the eldest of the elders.  So now just humans lived in the village, and a few mutants. The first person they approached to see what was going on in town was the ice fisherman and skate skiff captain, a human with some slight rat features that introduced himself as Remy. Remy said that he knew who Olaf was, and that he was the one to take the crio-mutant out onto the ice just days before. He further explained that the greatest frozen petals were located out one one of the islands locked in the ice, and this is where Olaf wanted to go. Remy was sad to tell the princesses that there was significant peril on this small island because it was under the wicked control of a rogue AI unit that had once been part of a great ship that sailed the skies. This unit, Crew-L.A.D. VII, commanded a clan of Winter-Pelted Margr's and used them as minions. Rumor had it that the Crew-L.A.D. VII would've been especially interested in Olaf because it's physical robotic form was commonly adorned in the flesh of crio-mutants.

Remy would've been happy to take the party to the island but was unable to because he had to pay his sail in taxes to The Skinner, an evil man who had the village under his iron thumb. Well the princesses and their new friend Poppins would have none of that. They were determined to confront The Skinner and get back the sail. Remy said that a nearby tavern, Steaugu's was where The Skinner typically hung out, and his mansion was usually relatively empty. It was in his mansion that he kept his "taxes" collected from the villagers. Merida eyed up the mansion of The Skinner, saw the four story tower, and believed it had to be where his greatest treasures were kept. Grabbing rope out of their explorer's packs, the party passed it to Poppins. The gravity controller grabbed Anna, who shrouded them both in her chameleon cloak and then they hovered up to the tallest window of the tower. Sure enough the sail, as well as other treasures from the village, were in the highest room.

Anna went to pick the lock on the window but she set off the alarm. This sent out a loud buzzing that would surely tell everyone in town what was going on. Quickly she broke the glass, darted in the room and grabbed the sail, tying it with the rope so that Poppins could lower it down. But outside, The Skinner was facing off with Elsa. An evil fire commanding nano, The Skinner despised the ice loving Elsa even though he had never met her before. The two began blasting each other in ice and fire, although it was clear that the princess of Nihliesh was superior in her esoteries. As Poppins lowered Anna to the ground, an alarm bot flew out of the window and threatened the flying nano and the dangling jack. But no bot could withstand an arrow from the bow of Merida, who dropped it fast. Once on the ground, Anna realized that The Skinner had friends, a pair of bat wielding thugs who charged the party. Anna's crossbow broke on her first shot and she had to use her staff, but she was no match for two of the thugs. Luckily Merida the glance used her sword one one of them, and even after getting slugged by one of the bat-wielders, Anna returned the favor by smacking a stink pot in the face of her foe, knocking him out. Bolstered by Poppins' gravity control which had blasted The Skinner to the ground, Elsa continued to cover the evil nano in frost. After having enough of The Skinner's evil ways, Poppins stepped up and used her whip to shatter the head of the town's long time dictator. 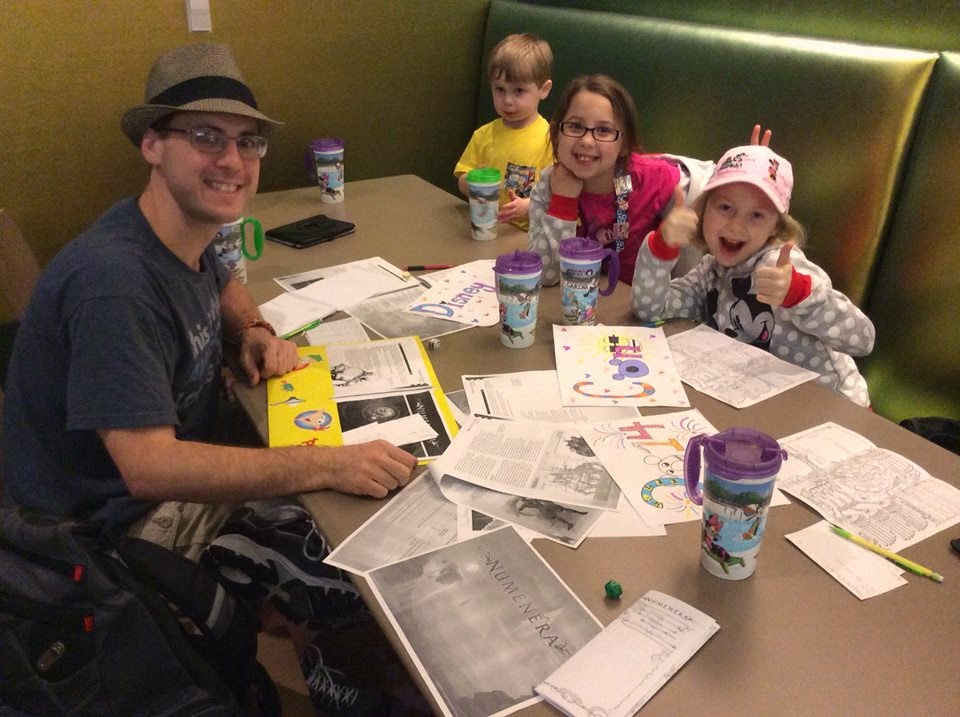 Hey, it's the GM and his crew!


"We have a nanny now!" - Carrie was excited that her grandmother was joining the party as Poppins.

"Are they animatronic legs?" - Mommy still pondered the workings of Nihliesh and how it strolled through the desert.

"He probably wears a skin bow tie." - Evie's take on The Skinner.