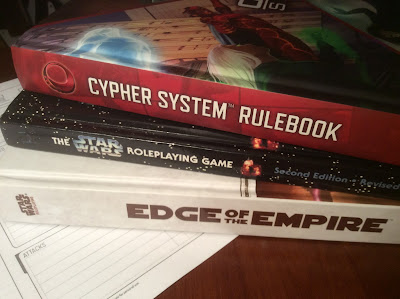 Is this another Cypher System Star Wars post?  Didn't you just do one of these on Friday?

Too Much of a Good Thing?

Just two days ago I posted an adventure summary of my family's Star Wars role-playing game experience using Monte Cook Games' Cypher System Rulebook.  In a single short adventure we kicked off what I hope to be a brand new family campaign, starting on the Forest Moon of Endor.  But this wasn't the only Star Wars game I had prepared for the weekend.  After a very busy week at work I had planned a full weekend of Star Wars gaming...

... because seriously, you can never have enough Star Wars!

After wrapping up Saturday's blog post I got right down to business preparing for a Saturday evening of the Star Wars X-Wing Miniatures game.  Evie, Cooper, and I played for nearly three hours, as we test-drove our brand new Scum & Villainy ships. 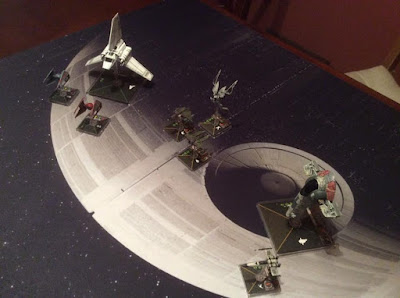 When Sunday rolled around it was time for more Star Wars, and through the power of a brand new G+ community I was able to throw together a one-shot in no time!

Towards the end of MCG's Worlds of the Cypher System Kickstarter campaign, +Darcy Ross and +Jeremy Land offered to run demos and one-shots for backers.  I was inspired by Darcy and Jeremy's enthusiasm, so I threw my hat into the ring as well.  Once the campaign was over, I figured that we would need some kind of group to help coordinate all of these demos...

... and that's how the Cypher System One-Shot Connection was born!

The goal of the group is simple: for Cypher System fans to link up and run one-shots and demos for other gamers, especially those who've never had the opportunity to play.  Perhaps some of these one-shots will create new gaming groups, adventuring parties, and friendships for years to come.

Two years ago a similar group gathered for a short demo of The Strange... and some of us are still gaming today!

So if you're looking to play some more Cypher System games, from Numenera to The Strange to homebrew games out of the CSR, come check out our new group!

For our one-night, one-shot of Cypher System Star Wars, I pieced together an adventure using the following:

I don't do complete conversions.  I'm too lazy.  I also believe that nearly everything you need to run Star Wars with the Cypher System can be found in the Cypher System Rulebook, with a few tidbits from other Cypher sources.  If you're looking for my methods of running these kinds of games, the aforementioned link is what you want to follow.

Back in December I created six pre-gen characters for the Cypher System, originally intended for a special holiday weekend one-shot.  Well due to the flu that game never happened.  Tired of typical Star Wars goody-two-shoes types, I created the Villainous Scum as a team of mercenaries in the employ of the Empire.  Each character had a unique backstory, with connections to other characters, and a few possible possible twinges of the light side. 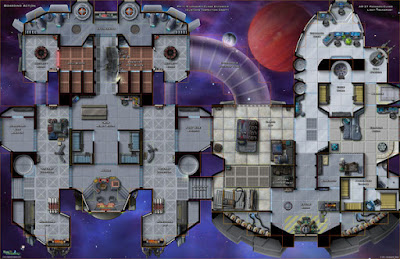 Maps of Mastery by Christopher West

I'm a big believer in good maps.  Some game masters can run games right out of their brains, describing scenes perfectly with little to no use for a decent map.

True, it's rare that I set up a map for tactical gameplay, but if I'm going to have a group of players explore a starship, I want a deckplan ready to go.  That's where +Christopher West comes in!  Christopher has a fantastic series of sci-fi maps over at his Maps of Mastery website that you can pickup for your own game.  The adventure I threw together for last night's game (titled "Graverobber") was inspired by Christopher's Mass Transit III series, and the AR-37 Paragon Light Transport.

Oh, if Chris' name sounds familiar that's because he is the ENnie Award winning cartographer for Numenera.  So make sure you give him some love and pickup some of his maps!

Enough backstory, on to some of our session highlights!

In this one-shot scenario, the Villainous Scum are mercenaries paid for service to the Empire.  A genius Verpine droid engineer named Cyrex has been spotted raiding the shattered Graveyard for artifacts that hidden beneath Alderaan's surface before its destruction.  The Villainous Scum must disable Cyrex's transport, capture the Verpine engineer, and bring her back to a nearby Imperial base.