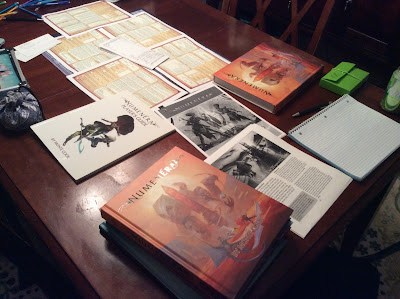 Returning to the Ninth World

Last night I went home... at least that's what it felt like to return to the Ninth World of Numenera. Ever since the Numenera 2 Kickstarter launched last week, I've been kicking myself for spending so much time away from the system. Not counting the booth demos that I ran at the Monte Cook Games booth at Gen Con 50, I haven't had a chance to play Numenera since our last episode of The Devil's Spine in May. Not only do I plan to rectify the lapse of our Devil's Spine campaign, I also wanted to do a little reboot of Numenera and the Cypher System at home.

So I gathered the Family Game Knights for an evening of exploration, discovery, and lots and lots of weirdness!  This would be an interesting change for our group. While six of our seven regular players were all Numenera and Cypher System veterans, this group originally banded together to smash and die in Dungeon Crawl Classics. 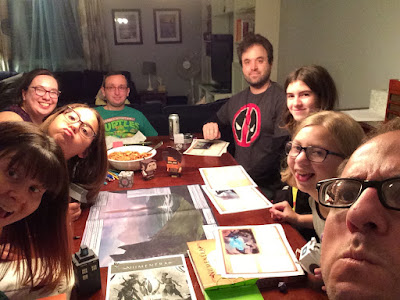 So, what adventure to choose for this reentry into Numenera...

... how about Muullis: The Wayward Hamlet written by my good friend and blogger +Marc Plourde!?!

My way to do that cranking was to grab Injecting the Weird by Monte Cook, and then throw in a bunch of crazy modifications to areas, NPC's, and situations. This is how the village elder of Perrun ended up having the physical form of a three month old baby, despite being over eighty years old.

Ready for some SPOILERS? If you are a GM looking to run Muullis: The Wayward Hamlet, you are allowed to keep reading. Otherwise, just skip down the fan art and don't read anything else.

Remember the musical Brigadoon? Take the time travel issues of that musical, toss in some dimensionally warped people, a few dashes of dimensional monsters, and some rogue Aeon Priests and you have Muullis: The Wayward Hamlet. During the course of the adventure, the player characters discover that there is a legendary village that appears and disappears in a region of the Ninth World. The PC's eventually gain access to the village, and then find out that time is traveling much slower for the trapped occupants. Any of the village natives who leave the village are transformed into a horrific Abykos-like monstrosity.

The village's dilemma was the result of a trio early Aeon Priests. These members of the Synod of Perfection performed an experiment sending Muullis into a temporal whirlpool. For the PC's to be successful, they need to restore the movement of time in Muullis, and return it to it's original location in the Ninth World.

As I mentioned before, I really like how this adventure is so adaptable. We ran it as a three-hour introductory session by trimming off a few mid-story encounters, but add in those encounters and this could fill a four-hour convention slot. Actually, we probably could've run the adventure as written, with all mid-story encounters, if I hadn't come up with the Sgrentipillar. 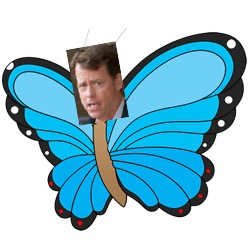 I did not mean for these things to become such an integral part of the adventure, but they did. For our session, I used the "Herder in Trouble" scene as the introduction to the adventure. The party came across the herder, who was written to have a pack of gallen, creatures native to the Ninth World. But I wanted to turn up the weird, so I said that she had a pack of "sgrentipillars."

When first encountered, sgrentipillars appeared to be six-foot long wooly inch-worms, kept for their soft fur. But when the PC's flipped one over to see its face, they were horrified to see a twisted human visage obviously in pain! The villagers of Perrun admitted that the sgrentipillars were strange creatures with a bizarre life cycle:

The players eventually learned the horrifying truth of the sgrentipillars! That they were ensnared villagers from Muullis, captured by the man-baby village elder Belcer before the Wayward Hamlet became trapped in time. The "clicker" devices allowed the villagers to be transformed into weird butterfly hybrids, and also controlled their minds.

If allowed to emerge from a cocoon (which requires breaking the clickers) a full-grown sgrentipillar becomes a beautiful sgrentifly!

Sgrentifly: Level 3 creature, 9 health, no attacks, flight, looks like a butterfly with the face of acclaimed actor Greg Kinnear.

Fan Art from the Ninth World

Before drawing this blog post to a close, I need to share the awesome fan-art created by one of our players: Ella. This drawing is her depiction of Kalain, the Strong Glaive who Wears a Sheen of Ice (a pre-gen character from The Spire of the Hunting Sound Quickstart Adventure). During the course of the adventure, Kalain befriended a sgrentipillar who she named Billy. But Billy's companionship was cut short, as he was slain by the party after being allowed to cocoon.

To check out more of Ella's art, go to her DeviantArt page!

We had so much fun diving back into Numenera last night, and if you've never had the opportunity to try this game you owe it to yourself to dive in head first. The timing couldn't be better with the Numenera 2 Discovery and Destiny Kickstarter in full swing. So if you enjoyed this post, and want to learn more, go over to the Kickstarter page, and give it a go. Numenera completely changed the way I ran my games, and this month is my fourth anniversary in the Ninth World.

Here's to the next evolution of a wonderful game!
Posted by Living 4 Crits at 12:27 PM