While I knew that The Emerald Enchanter by +Joseph Goodman would take us more than one session, I didn't quite expect that our party's delve into the citadel would end with a relatively quick retreat after just a pair of rooms. Or maybe I should've expected this, given the nature of the threat I levied on my players at the beginning of the game.

Before we kicked off the evening I warned the players: no more Mr. Nice Judge. This was our tenth session, and there really hadn't been a serious death in the game (other than poor Brock the Tomb Ghoul) since the PC's were 0-level. No more. Dungeon Crawl Classics is supposed to be a challenge, creating stories of both valor as well as horror, with each discovered treasure paid for by the blood of fools and heroes alike.

So our intrepid adventurers marched up to the Emerald Enchanter's Citadel and discovered a pair of human-sized green statues. One appeared to be chiseled from gem, and the other looked like a frozen green man. Both were armed with swords, and when Sir Huey approached, the statues stepped forward. Time for a fight... but things didn't go well for the party.

Rather than fully describe the battle, let's take a moment to learn about "shooting into melee" shall we?

"A character who uses a bow, crossbow, dart, thrown dagger, or other missile fire weapon against an opponent engaged in melee may hit an ally. If the attack misses the intended target, there is a 50% chance it hits an ally engaged in the melee."

I reiterated this rule multiple times last night, to no avail. I wasn't surprised when Quinn the Wizard (who flubbed a Flaming Hands spell) killed Jeffff's faithful wardog Hercules with a thrown meat cleaver. Frankly, the fact that our party's wizard regularly resorted to chucking cleavers is a clear indicator that things weren't going well, even from the outset.

Things went worse in the next room. After breaking into the front entrance of the Citadel, the party faced a long tiled hallway covered in strange mosaics. Each picture showed the Emerald Enchanter doing something sinister:

The party explored the hall for a few moments before trying to walk to the opposite end and open up the door on that side. Just then, thousands of small tiles from the floor, wall, and ceiling all flew together forming a swirling cloud of tiles in a humanoid form. Let's just say that our adventuring party did just about everything they could to completely screw up this encounter:

At least Farwyn, Sir Huey, and Jeffff showed up for a real fight. The Elf and Human Warriors were the only party members bringing the pain smashing the tiled creation into thousands of broken shards.

Following the battle, the party tried moving into the next chamber, but were surprised to find a weird entity on the other side of the door. The large figure pushed its way into the hallway, closing the door to the next room behind it's body. 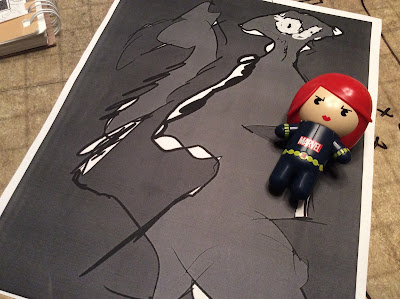 The entity, which looked like a seven foot tall, quasi-amorphous squirrel (drawn by Cooper) said that it's name was Do-Me, and that it wanted to make a trade. Given that it was friggin' huge, and it announced gleefully that it had "fifty hit points," Jeffff offered up one of the dolls he had from the team's very first mission: Jerald.

Jerald the Herder (Andy's character) was one of the poor 0-levle characters that succumbed to the horrors of the Sour Spring Hollow. After dying he was turned into a corn doll. Perhaps there was a way to save him, and bring him back from the dead, but this was no longer an option.

Jerald was now the property of Do-Me.

Do-Me left the scene, allowing the team to move into the next chamber, a living quarters complete with comfy chairs, a long table holding a massive emerald on display, and a pair of really nice carpets. Sir Huey thought he saw something fluttering in the room, so he strolled to the table and looked underneath.

But when the warrior turned around to check out another part of the room, two floating green skulls appeared!

Oh yay, another battle... and this one went about as well as the last two.

More of Quinn's spells backfiring, and the Wize Wizard McBride gaining more disapproval. Farwyn was so afraid of botching a spellcasting attempt that the Elf seemed to swear off all magic and resorted to her mace for combat. By the end of this relatively easy battle the party had a decision to make: keep moving forward, or take the loot they found in the room back to Ugly Bottom so that they could recuperate, regroup, and reequip.

The party chose the latter path... which ended up being the best decision they made all night.

So, lots of shopping, some leveling (both Farwyn and Quinn made it to 2nd level), and the Wize Wizard McBride had to get rid of some Cthulhu disapproval. The plan that WWB's player (Jen) cooked up was pretty twisted. He traded his prize dragon skull to a local toy maker, and had twenty Cthulhu plushes created. The Wize Wizard McBride then took these dolls to a local park and handed them off to all the children in order to start indoctrinating them in the ways of Cthulhu...

"We could sell Walden into slavery." - Jeremy trying to figure out a way to earn a few coins.
"Sell him to a bookseller." - Jen had a point.

"I told you all, the death comes tonight!" - Judge James after Hercules died from PC friendly fire.

"Put the war peacock into the hole." - Jeremy got a real kick out of saying "war peacock."

"I feel like its the walk of shame." - Jen as the party headed back to Ugly Bottom.