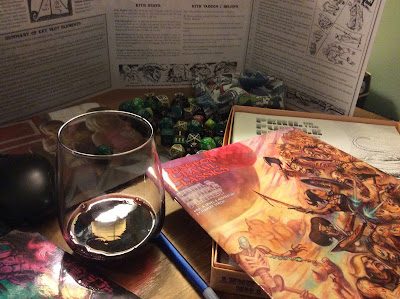 
I'm struggling a bit on the best way to share The Free Company's story on the Purple Planet. In the past I've done some pretty lengthy adventure summaries, complete with all kinds of intricate details. But since this is more of an open world, and given that some of the "game" is actually dealing with the minutiae of scavenging, finding food and water, and evading the sun, I'm going to try something different: a day-to-day log of major events.

Sure, this might make for a less interesting read for folks who aren't as familiar with our player characters, but I think this makes the most sense for our group. At the very least, if you're running Peril on the Purple Planet as well, you can compare stories. Perhaps when we get to more of the "meat" of the adventure I expand on the conversation a bit more. But for now, here's the adventure log:


"One minute I was asleep and next all this shit is purple." - Nicodemus wasn't around for the last adventure.

"Hey, hey! How do I look in this? Does it make me look fat?" - Nicodemus to Floyd upon donning a shrunken kith head belt.

"The Purple Planet mixed with Candyland." - Marc commenting on Judge James' description of the forest to the east.

"They should call it the Yellow Planet." - Paul was grossed out that Jonata was ready to do this.

"It's the strength of the pee!" - Jonata after rolling a natural 20 on the final hit on the kith mummies.