Cypher vs. the Sky High Tower 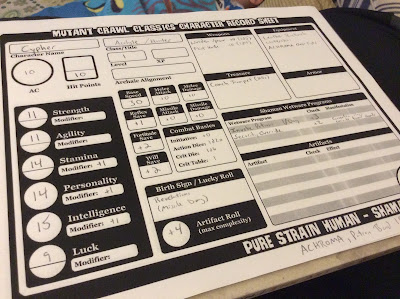 Cypher the Shaman of ACHROMA

I've had several opportunities over the last year or so to be an over-the-top, radioactively gonzo Mutant Crawl Classics judge. Granted, most of these games have been one shots. I've run two sessions of Museum at the End of Time (by +Jim Wampler), three sessions of Nothing's Free in Ocean World (homebrew adventure), and just last week Judge Evie and I kicked off a father/daughter MCCRPG campaign starting with Hive of the Overmind (by +Julian Bernick). Many games, but I wanted more.

I wanted to try out Mutant Crawl Classics as a player!

Leave it to Judge +Marc Plourde to oblige. My good friend, player, and occasional GM (whenever he can pin me down) offered to run Assault on the Sky High-Tower, by +Jim Wampler, for me and the rest of our Banished to the Purple Planet crew. There was no way I was missing this event! As one of the co-hosts of the Glowburn Podcast, I relished the opportunity to sit on the other side of the Judge's Screen and get the full, mutated experience.

Assault on the Sky-high Tower is featured in the back of the Mutant Crawl Classics Role Playing Game rulebook, and is suite for either 15-20 0-level characters or 8 1st level characters. We ended up with four players, and Marc let us each bring a single 1st level character, backed up with a trio of 0-level fodder. So I thought i'd take a moment to talk about my little team.

After generating four 0-levels via the Purple Sorcerer Mutant Crawl Classics 0-Level Party Generator, I took a look at everyone's stats, hoping to gain some kind of advantage. Three of my four 0-levels would make suitable 1st level characters, but I wanted the best experience. This is the one that spoke to me: 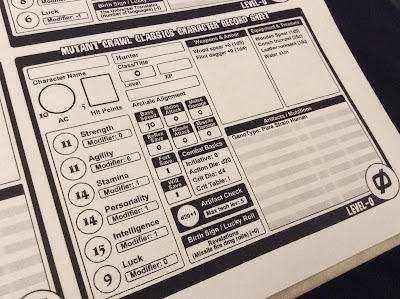 Great stats, maxed out hit points, and a Pure Strain Human... I was all set to play a Shaman!

Cypher, 1st Level Shaman of ACHROMA, Hunter from the Clan of Cog

Since ACHROMA is essentially Agent Smith from The Matrix, I wanted to have a name that I could draw from the movie series. Originally I went with Novo (kind of like Neo), but Neo and Agent Smith weren't the best of buds. Cipher (played by Joe Pantoliano in the movie) made much more sense. I swapped the "i" for a "y" as a little tribute to my other favorite RPG system. I think the coolest part of this character is how he has permanent "ACHROMA Over eyes" - sunglasses that are just glued to his face. Super badass!

Cypher has some pretty rad compatriots too.

All of those guys still have some 0-level characters left, but I don't keep track of minions' names. All in all we are a pretty Pure Strain Human heavy party, but I'm not complaining. Our plantient has an 18 Strength and multiple limbs!

We're about halfway through the adventure (I think), and Cypher is still going strong.  I drank some radioactive coffee and now have a permanently boosted Agility and Luck (both went up by one point). Unfortunately my three 0-level characters (Leondias, Frawg, and Slurps) didn't make it, and I just have the one-PC. But I have faith that Cypher will last until the end.  Our next game is early in November, and I can't wait to take MCCRPG out for another test drive.