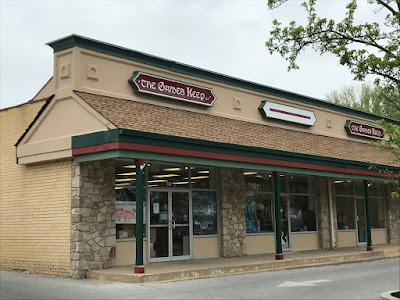 I wasn't planning on doing a recap for this game originally, but it was just too good not to share some bits and pieces of the event. I was so nervous that my first game following our move would be a complete bust, but it turned out to be such a fun session. One of those kinds of games where the players are riffing off of the GM's ideas, and everyone is totally involved with the storytelling, and there are smiles all around.

Last month I let you all know that I was moving to the Philadelphia area, Glen Mills to be more specific. Well we're here, and we're still unpacking, and at this point I don't think we'll ever be done unpacking.

But just because our apartment is completely filled to the brim, doesn't mean that we didn't want to miss Free RPG Day! I reached out to The Games Keep in West Chester, PA, and found out that they would be participating in the festivities. I offered to run some Dungeon Crawl Classics, and reserved a table. 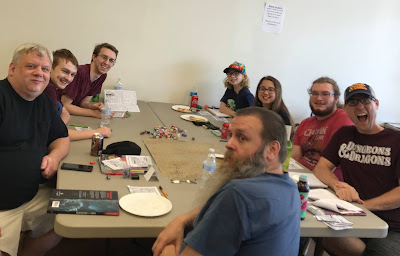 For my Road Crew offering, I ran Forrest Aguirre's Beyond the Silver Scream, albeit highly modified. While it wasn't my intention to break the original plot of the adventure, my players were just coming up with too many cool ideas about their characters' backstories.

I used these to heavily flavor the adventure, and alter the plot.

I want to make this a monthly thing! I'm thinking of continuing next month with Sky ov Crimson Flame as both an adventure and ongoing mini-campaign. Those who survived this first session can level their PC's, while new players would get a 1st level character.
Posted by Living 4 Crits at 7:27 PM