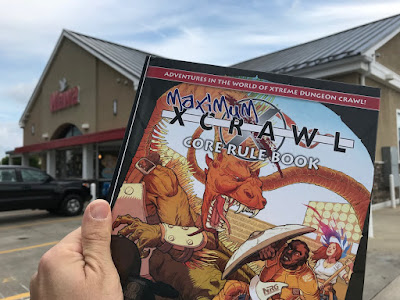 
When it comes to legendary 1980's cinema, you can't do any better than The Running Man. Dystopian future meets gory game show meets Arnold Schwarzenegger. Damn... it's just so good! But did you know that you can have that same feel at your gaming table? Well, if you are a Dungeon Crawl Classics gamer, I'm sure you know all about Brendan LaSalle's Xcrawl!

I fell in love with the Xcrawl universe after running Dungeonbattle Brooklyn as a fund-raising event for Lawful Good Gaming. Putting on my best Richard Dawson impersonation, microphone in hand I ran my players through a invigorating evening of deadly game-show antics! Ever since, I've had the itch to run more Xcrawl, and perhaps even write my own Dungeonbattle.

Behold, it is complete.

I really wanted to run Dungeonbattle Brooklyn for some of my friends here in the Philly area, but I thought that a 0-level funnel would be easier to start them into the world of Dungeon Crawl Classics. But there aren't any 0-level funnels for Xcrawl on the market. I needed to make one.

So let's do this.


I should note that I tend to inject a ton of pop culture into my games. Well, I'm not stopping with this adventure! Granted, feel free to run this using the standard setting out of Maximum Xcrawl, but if you want to run this adventure MY WAY, here's some fun tidbits to add:

Dungeonbattle Delco is a zero-level or first level adventure set in the Xcrawl universe. For those unfamiliar with the term, "Delco" is short for Delaware County, located just southwest of Philadelphia. It just so happens that this is where our family moved a couple of months back, and we are acclimating to the area and learning all the lingo (and the accent!). What better way to fulling immerse ourselves in the region than by setting our next adventure right here!

To make this Dungeonbattle a fully Philly experience, I decided to throw in a ton of local references. Feel free to use what I've got here, or toss in some of your own favorite hometown features.

Dungeonbattle Delco, also known as the "First Annual Wawa Classic Hoagie Classic", is a Division IV, non-lethal event that takes place in the brand new Xcrawl Semi-Pro Event Center (XSPEC) in the Springfield Mall next to the Target. DJ (Dungeon Judge) Pat Fiorino, a prominent Philly native and popular restaurateur, opened the Dungeonbattle Delco recently as both a sporting complex and dinner theater. Kind of like a Medieval Times, but with much more violence. DJ Pat dreams of running Division III, full-lethal events at the Springfield Mall, but for the time being he's only sanctioned to run amateur, college, and semi-pro level Xcrawl events.

The Xcrawl complex has done well over the last few months, and DJ Pat saw an opportunity to really kick the experience up a notch with outside corporate sponsorship. Wawa, and to a much lesser extent Scott Kia of Springfield, have all teamed up with DJ Pat to make the First Annual Wawa Classic Hoagie Classic the best Division IV non-lethal event ever.

If all goes well, perhaps the Second Annual Wawa Classic Hoagie Classic will be full-lethal!

Fair warning: I'm going a little crazy with what I'll be allowing in this Xcrawl campaign. I wanted to use not only the core DCC classes, but also the Mutant and Manimal from Mutant Crawl Classics and the Athlete form the Goodman Games Gen Con 2016 Program Guide.

All characters roll for both occupation and race.

As per the original Xcrawl rules, every player should choose an actor or actress to play their character in the game. Should the player choose a famous actor from the Philadelphia area, they get +1 Luck. Should they pick Bradley Cooper they get +2 Luck.

Don't tell the players about this until after they've all selected their characters. Also, it only counts before anyone knows the rules. But if someone thinks that they can game the system, and finds out about this prior to the adventure (spoiler alert not given), they get -1 Luck. -1d7 Luck if they try to pick Sylvester Stallone hoping to game the system. Stallone may have been Rocky, but he's from New York.


DJ Pat and the sponsors for the Springfield Mall XSPEC event have collaborated in coming up with fun and exciting rules for this event, even if there would be no "planned" lethality.

Division IV Non-Lethal: This event is a non-lethal, semi-pro/amateur event. Weapons are limited, and killing blows are not condoned. Should a PC, NPC, or intelligent monster be reduced to 0 hitpoints, a medic will appear from a No-Go door and make an attempt to administer first aid in the form of a healing potion. In addition, only the following weapons are sanctioned:

It should be noted that the event is nonlethal for both PC's and NPC's, and that includes any Kobolds. Killing of anyone will involve in immediate disqualification.

Splash Zones: DJ Pat's event maximizes the use of water elements called "Splash Zones." Should a PC find themselves submerged in a splash zone they have a 1 round to remove themselves (typically a DC 10 Strength check to climb out) or they will be disqualified. Zero level characters are out of the event. 1st level characters can return to the next area so long as the team makes it through.

Commercial Breaks: For my event, I prepared a list of great commercials to show on YouTube. I was inspired by Judge Michael Bolam's use of a commercial break at Gen Con. If you want to use my commercials, here you go. Just follow that link and enjoy! For best effect, run 3 commercials after each Area.

[DJ's Fun Fact: Wanna make this event more lethal? Like Division III? Just go and electrify those pools of water! DC 15 Fortitude Save or take 3d6 Stamina damage? How does that sound?]


After field reporter Katie Lynn interviews the PC's in the green room, its time to get started. The adventurers walk into a 100' by 50' arena, surrounded by spectators eating their dinners. That's right, it's dinner theater time! A miniature castle is situated on the far end of the chamber. This opening scene separates the heroes and monsters from the spectators by just a thin net. Fortunately, there's not much danger ahead, but a lot of opportunities to test some basic skills.

Before the scene, DJ Pat accounts the PC's, and thanks the Media, PA based Media DelKobold Club for creating this very first challenge. He also reminds everyone that this is a non-lethal event, and that goes for the DelKobolds as well. 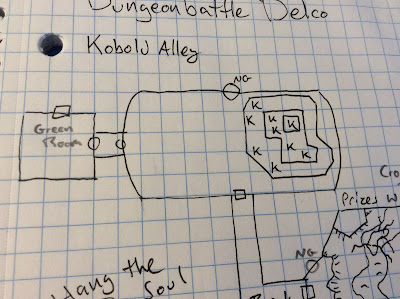 Area 2: Hang the Soul (by Scott Kia in Springfield)

Much like the famous TV show Climbing for Dollars, Hang the Soul requires a great bit of hanging... and climbing. It also features really angry bats! The room is a 50' wide, circular chamber, with a pit of wooder (water) at the bottom. A small ramp leads the PC's to a series of 10 ropes. At the top of the 40' high chamber there is an Xcrawl Edition Kia Soul hanging from the ceiling.


The goal of the Area is to climb up the ropes and get into the car, turning the ignition. The first to succeed wins the car. 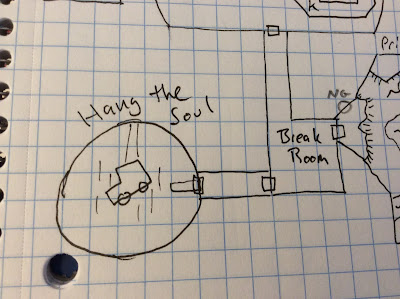 The PC's face a chasm with a great, bubbling river running down the middle. Immediately across the chasm, the PC's see another door. Unfortunately the gap is over 30' away. There are several raised platforms in the room as well, each holding wonderful prizes! Unfortunately, a great mutated calamari slime lurks in the river, and it is quite irate. 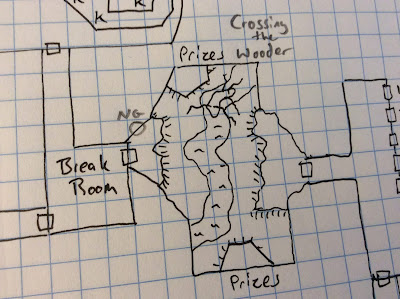 Area 4: Pick a Prize by Wawa

Just a really nice place to take a quick break and win some fabulous prizes! Katie Lynn shows up and interviews each of the PC's to see how they are enjoying the events so far. Also, they are asked if they want to say hello to anyone back home on the AVS (arcane video screen). Once the pleasantries are done, there is a word from the sponsor, and then the PC's get to choose to open one door each (or opt not to). 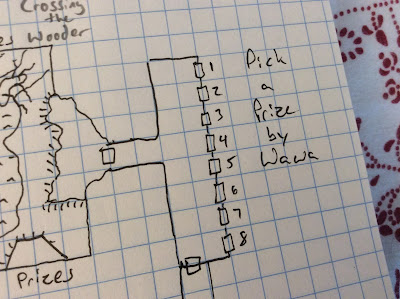 The next room is a big, circular, concave, ice covered surface. Kind of like one of those donation jars you see at a mall where you put a coin in the slot and it rolls down towards the center. But in the center there is only pain. On the opposite side though is a way out, to the final Area. The only way across is to skate... or die...


... well not "die" as this is non-lethal, but pretty much the closest thing. 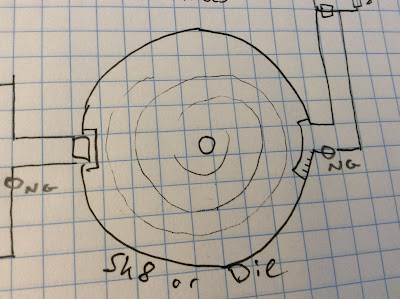 Area 6: Lair of the Eagle

The final chamber! Here, the PC's will face off against Super Bowl LII champion and 2nd level wizard Nick Foles! The party enters through a doorway into a big square room, 60' across. On the northern end is what looks to be a cave. There are onlookers all about, watching through glass walls. This is totally right out of the Colosseum from Best of the Best 2. Most notably, there is a Gnome watching on a pedestal, standing next to DJ Pat, holding a wand.

DJ Pat announces the final chamber as the Lair of the Eagle, and everyone starts to cheer. A four (4) pro-wrestler looking orcs (DCC rulebook, page 423) emerge from the dark cave, followed by Nick Foles!

Nick Foles is wearing a Philadelphia Eagles Wizard's Robe, and is clutching a staff with a football on top. 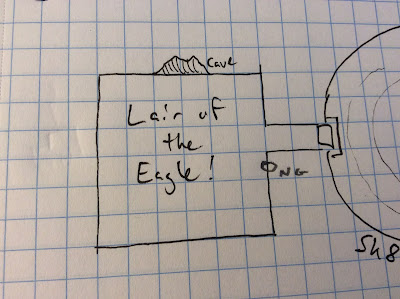 Once Nick Foles and the rest of the orcs are either unconscious or in the water, DJ Pat announces the victory! Time for prizes!


Besides getting selected to go pro, a team of adventurers who defeat Dungeonbattle Delco gain the following awards:

At the end of the adventure, for a special touch, have Wayne Brady show up as a celebrity to give out the prizes. 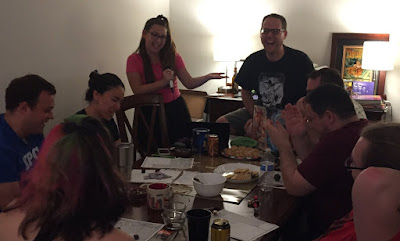 
I ran Dungeonbattle Delco as our very first role-playing event in our new apartment in Glen Mills, PA. It had been just over two months since moving in, and it was about time for us to roll some dice. We had six wonderful players, a terrific mix of folks I've played with for years, and new friends that we've just met in recent months here in the Philly area.

Our group of Xcrawlers included the following PC's: 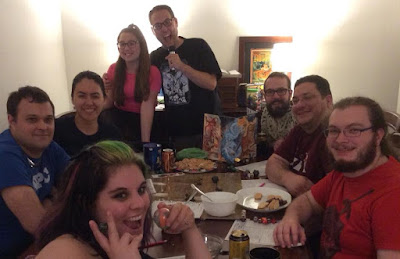 If I had any takeaways from running the game, it was how competitive the group was during certain scenes. They really fought for that Kia Soul! 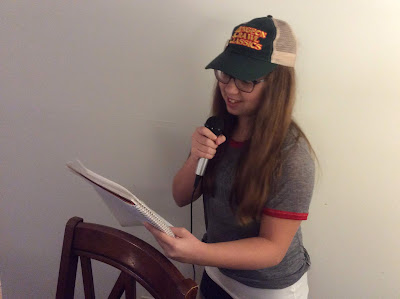 Hats off to Judge Evie for doing an EXCELLENT job playing Katie Lynn, the field commentator for the Dungeonbattle. Her Philly accent was awesome! 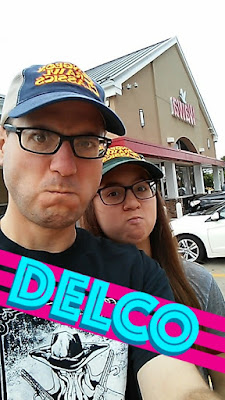