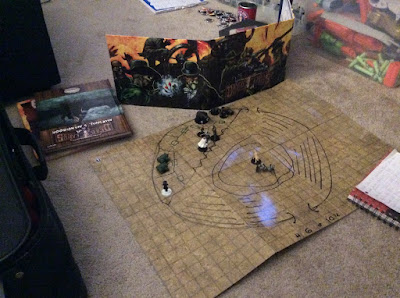 Another night, another Savage Worlds: Deadlands Reloaded bedtime story with Cooper! Now I'm here, doing a brief recap while listening to my own personal Weird Western playlist on YouTube.

I should note that last night's session included a miniature that Cooper painted himself: a Hero Quest skeleton. He wanted to use that figure for Sebastian, so until we get something from Hero Forge, that's gonna be Cooper's character. Come to think of it, my miniatures for this game are lacking in general. I'll share the scenes below, but I'm using mostly D&D miniatures. I need to fix this. I've got a handful of Deadlands minis, but nowhere near enough. Maybe in coming weeks this'll get righted.

My post last night (covering the prior night's game and origin) discussed the origin of this new, bedtime story campaign. Since it was a lot, I thought I'd skip straight to the story.

Session 2 - Under the Big Top

Things looked worrisome for Sebastian Squelette. He allowed the creepy clowns to take his shotgun and whip and lead him to the circus, but once there, it seemed like they were going to be keeping him for a while. 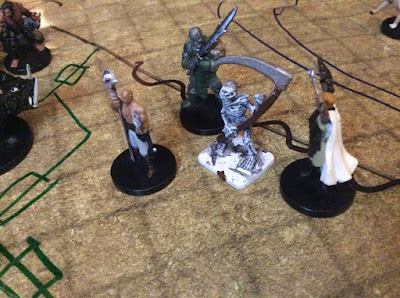 Once backstage at the circus, Sebastian noticed that there were several cages. One housed a pair of wolves and a wolfman. Another kept a massive boar. A pair of huge frogs were penned up nearby. In the last cell on the far side of the area a sickly looking man had collapsed from exhaustion on the floor. 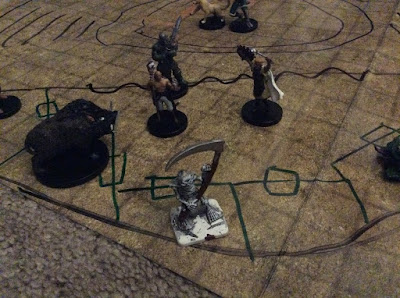 Sebastian allowed himself to be locked in the cage, and turned to thank his new jailers. Once they left he hatched a quick plan. 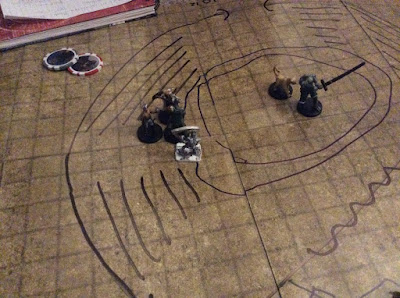 One of Sebastian's harrowed powers allowed him to turn into a ghost. As soon as the clowns had left the backstage area, the outlaw skeleton became incorporeal and drifted out to the main area beneath the big top. Across the chamber he saw that one of the clowns had a large key on his belt.

Sebastian carefully snuck up on the clown and grabbed the key. This required him to become corporeal again, but before he could change back he was spotted. 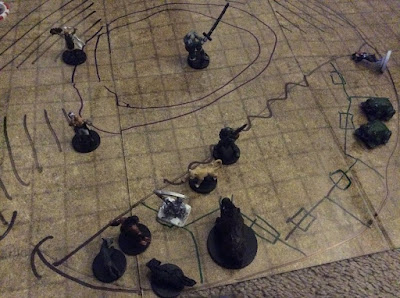 Sebastian ran towards the backstage area while the clowns grabbed torches. The ringmaster Philippe sent his tiger after Sebastian as well. Knowing he'd need allies, Sebastian ran up to the wolfman and let him and his wolf allies free. 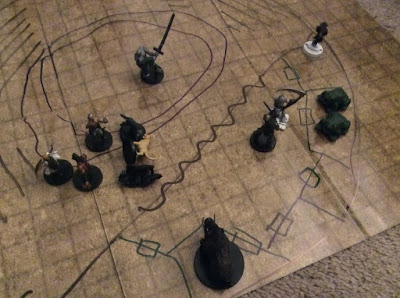 Here's where things got messy. The wolves attacked the tiger, and the wolfman attacked two of the clowns. The third clown charged Sebastian as the skeleton made his way to Mr. Zink's cage. But once Sebastian unlocked his zombie-friend's cell, Mr. Zink unleashed some wicked arcana on the pursuing clown.

Turns out that Mr. Zink is a Huckster - a spellcaster that made deals with dark spirits in return for awesome energy. Mr. Zink's spell of choice, a lightning bolt, made short work of the clown. 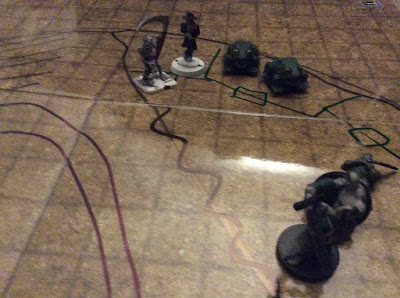 (GM's Note: Seriously, if Cooper hadn't nailed his soak roll at this point it would've been a short adventure. Technically I'd let him wake up in a grave with a splitting headache rather than kill off Sebastian. I don't think Cooper's quite ready to "play for keeps" again yet, no matter how much Dungeon Crawl Classics I've put the child through.) 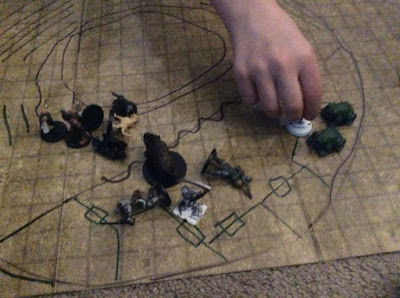 Undeterred by the ringmaster, both Sebastian and Mr. Zink returned fire. Lightning and bullets peppered Philippe as he dropped to the ground. Then the two partners in crime unlocked all the cages, allowing the other critters to get free. The undead pair wasted no time hightailing out of the big top, dropping the last remaining clown so as to assist the wolfman. The wolfman introduced himself as Wolfman.

Once outside, the trio headed back to the train station. Chances are they wouldn't want to stay in Dodge City for long.

Okay, I'm having serious flashbacks to Numenera Disenchanted Tales with Carrie and Evie now. I remember our first game being a bit of a tough grind, just trying to keep the girls on target. But the second game was a lot smoother, and so on and so forth. Each game they got more and more excited by the story and by advancing their characters. I think we're going to have the same thing here with Cooper.

I got home late from work tonight. Around 8:30pm. I figured Cooper would've dragged his feet on getting a shower, and we wouldn't have time. Nope! He was ready to go. So we had a great one hour session, did the good night hug, and he was off counting sheep. I have a business trip for the rest of this week and he was a little bummed that we couldn't continue night after night.

There's always the weekend!
Posted by Living 4 Crits at 6:36 AM