To continue our quest to help spread the good word of Dungeon Crawl Classics, Mutant Crawl Classics, and all things Goodman Games, Judge Evie and I joined forces with Brendan LaSalle at the Save Against Fear convention in Harrisburg, Pennsylvania this past weekend. This little boutique con featured just about everything you'd see at much larger venues, but in cute, smaller doses.

Except for Pugmire. There was a crap-ton of Pugmire at this con! But it only makes sense, since Onyx Path Publishing was a big sponsor for the event.

But I wasn't at Save Against Fear to be a spellcasting terrier... I was there to spellburn and glowburn my way into glory! 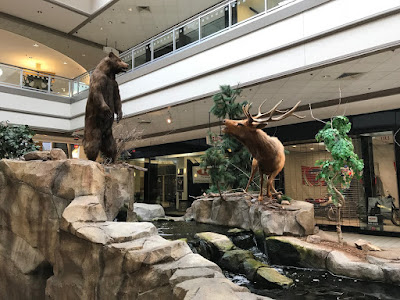 When we arrived at the Harrisburg Mall, Evie and I were a bit confused. I think we were expecting a more obvious "gaming scene", but Google Maps took us to an entrance near a Bass Pro Shops. We could've rolled initiative with the stuffed animals, but instead we decided to keep hunting around. 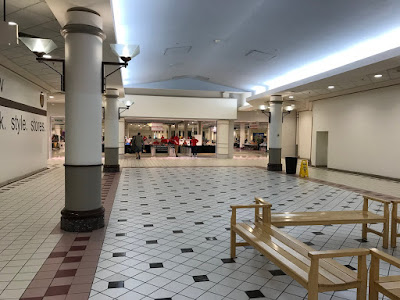 Our first view of the convention... a convention being held in an abandoned Boscov's. Weird! So, so weird! But it kinda worked. Actually, it would've been a great place to run some zombie games. 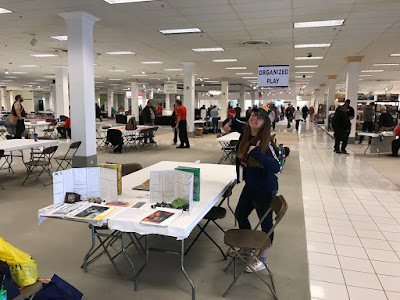 Our first game Saturday morning was Mutant Crawl Classics. I decided to run my oceanic hex crawl Nothing's Free in Oceanworld. Here, Judge Evie helps me set up my table. 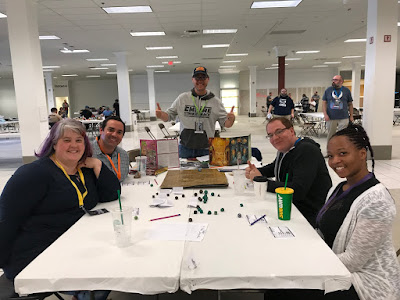 I had a great group of players for this event, including a pair of folks from Canada and a brand new, first time RPG'er. WOOT! 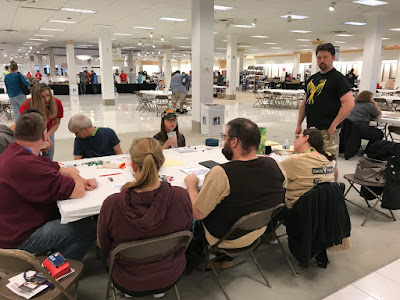 While I ran MCC, Judge Brendan was busy running DCC nearby. Since she had played in my adventure before, Evie decided to hang at the cool kids table. 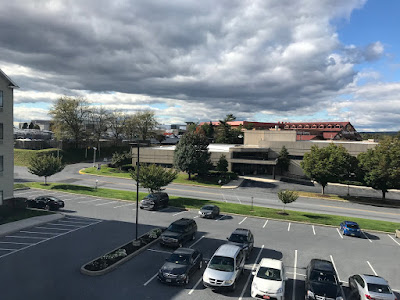 We had a two hour break between sessions, so we checked into our hotel across the street from the mall. Here was our view of the mall from our room. If you see the department store entrance at 9 o'clock on this picture, that's the entrance to the con. There was also an RV convention going on at the same time. We debated checking it out. 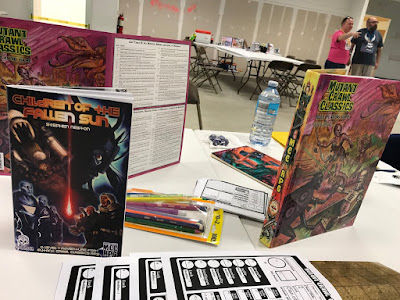 I was scheduled to run Children of the Fallen Sun at 4:30 on Saturday. But there were a lot of open seats at a lot of tables, so I wanted to show off a bit. Hence this swank display of awesomeness. 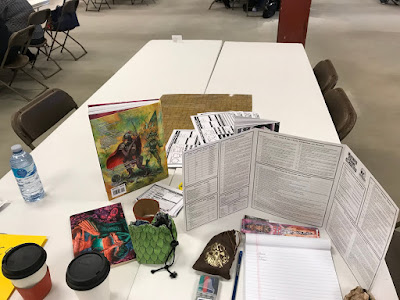 Unfortunately the swank display didn't work. Here's the busiest our table got. Zero players. ZERO! This was only the second time that I had ever been stood up at a convention. The first time was way back at my very first convention in 1996 (EpiCon at Lehigh University). 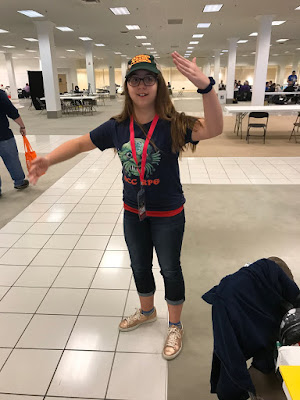 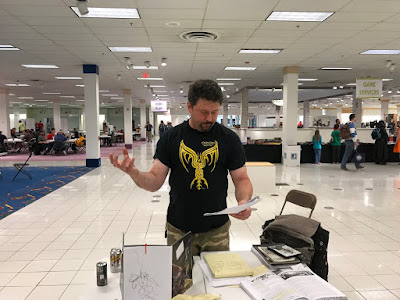 At least Brendan had a full table, and was busy running a rousing game of Xcrawl. 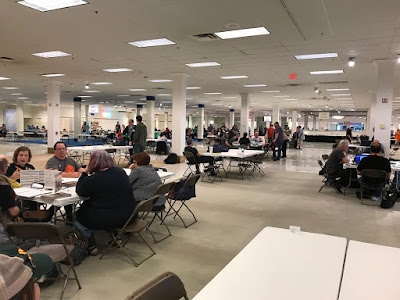 The scene from the con, right about when we called it quits and packed up. 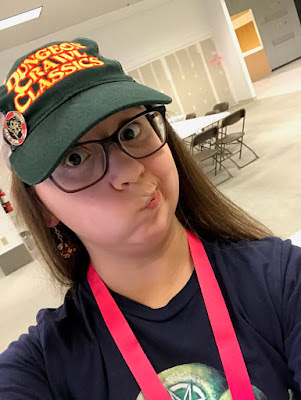 We needed to find something else to do! 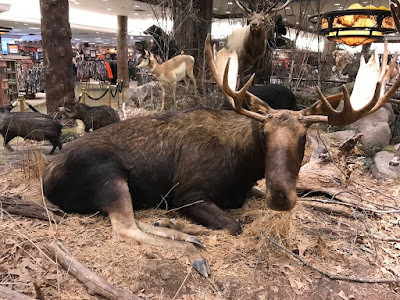 Holy crap, is this The Long Dark? 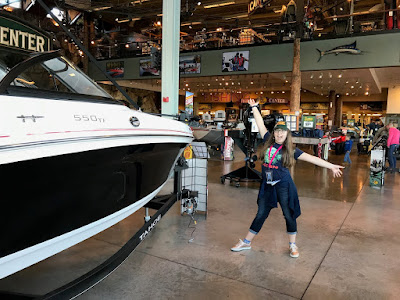 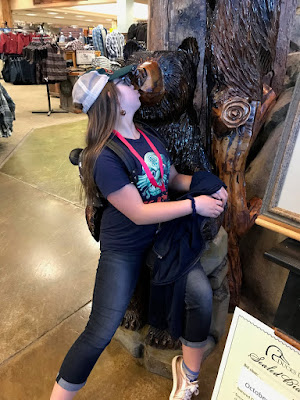 It was here that Judge Evie discovered the love of her life. 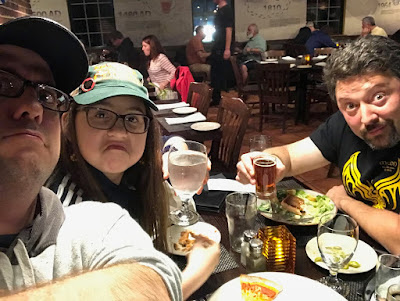 After bouncing around the mall a bit more, we scooped up Judge Brendan and headed for the Lancaster Brewing Company pub. Wow, that was a great meal! The pretzel was great. The edamame were great. The pizza was great. Brendan said his salmon caesar salad was great. The bread pudding was knock down, drag out phenomenal.

Pretty much everything, including the beers, were incredible.... with the exception of the Shoe Fly Porter. Brendan ordered a flight of different beers, and both he and I sampled the hot mess that was the pie-inspired beer. Steer clear of that one! 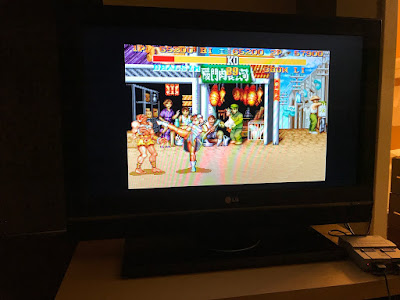 After going to sleep at 9pm and waking up at the crack of 7am, Evie and I lounged around and played on my SNES Classic. Mostly Street Fighter II, but a little Super Castlevania IV, a tid bit of Secret of Mana, and some Mario Kart. 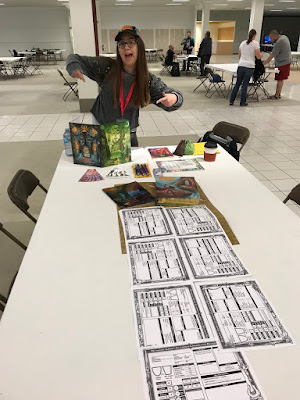 Uh oh... another day, and another empty table. I couldn't get any players for Shadow Under Devil's Reef. Evie tried super hard to recruit, but we just couldn't get anyone to stick around longer than to have a brief chat.

Actually, this was a bit of a trend at the con. There seemed to be more GM's than players at times. 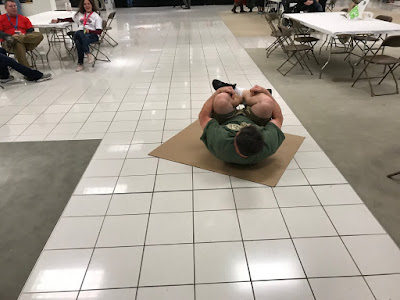 But what Save Against Fear lacked in DCC players, it made up for in breakdancing Brendan LaSalle's. 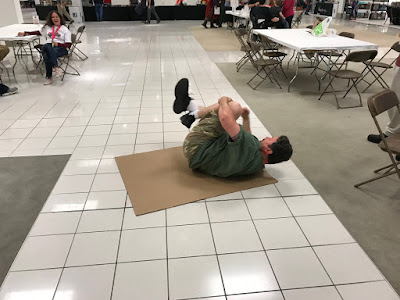 Look at him go! 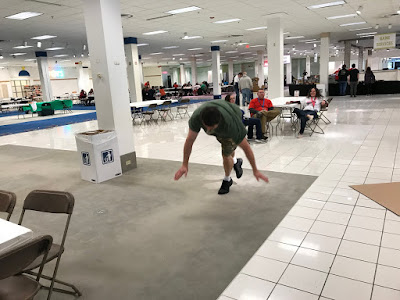 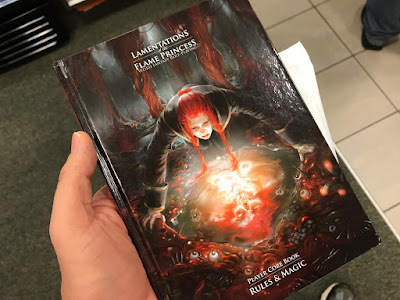 After packing up our DCC stuff, I did a bit more shopping. I found a slightly used copy of Lamentations of the Flame Princess at a used bookstore in the mall for $15. Sold! 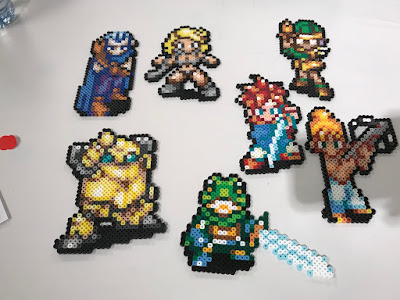 I also bought a whole set of Chrono Trigger bead art to put up on my wall or shelf. Big purchase of the con! 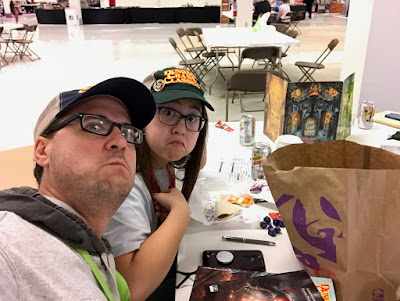 Then it was time for Brendan's DCC session, an adventure call the Tavern at Five Points. It was also time for a heaping mess o' Taco Bell. 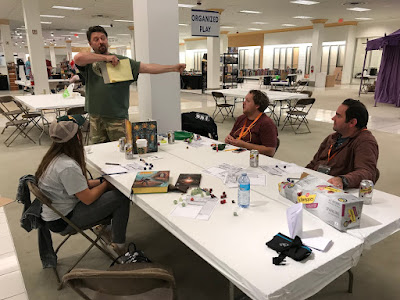 I've been hanging with Brendan at cons for several years now, but this was the very first time that I've ever been at his table as a player. All I've got to say is "WOW, you need to get your self to one of his tables!" 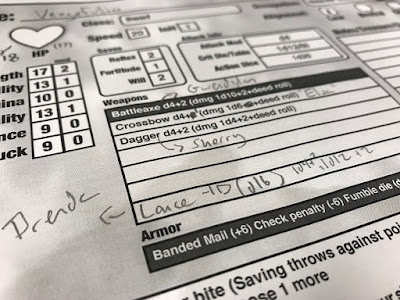 I played a lawful Dwarf named Vengefulio, who carried a bunch of weapons that were also named. Like his battleaxe "Gwendylin" or his crossbow "Elsa" (let it go!)

Unfortunately we figured out early on that "Vengefulio" is Italian for "friendly fire." I sure hurt a lot of other party members during our session with some truly poor rolling. 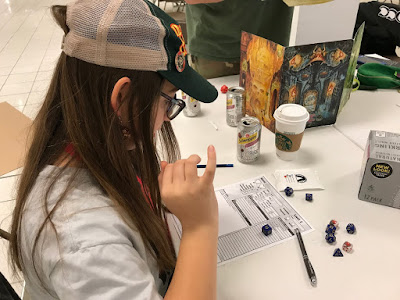 In the end it all worked out. If my 10:30 game hadn't been cancelled, I never would've had the opportunity to play in Brendan's 12:30 session.

After the game was over, we called it a day. We said some goodbyes, grabbed some Sheetz coffee, and took Brendan back to the airport.

Although 2/3 of my games didn't get off the ground, I think we learned some valuable lessons at this small, regional convention:

1) There is always good gaming to be had, you just have to find it.

2) If possible, bring a posse with you to the convention so that you will have a few extra gamers on hand.

3) Schedule your games at the same times as those of your friends. That way, if one of your games cancels, you can join the other.

4) Whatever you do, if you are at Save Against Fear in the future, and its at the same abandoned Boscov's in the Harrisburg Mall, DO NOT use the bathroom in the back of the area. Take the long walk to the Bass Pro Shop and use their bathroom instead. 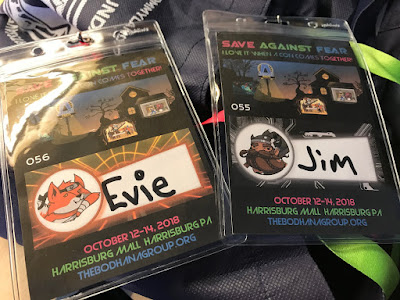