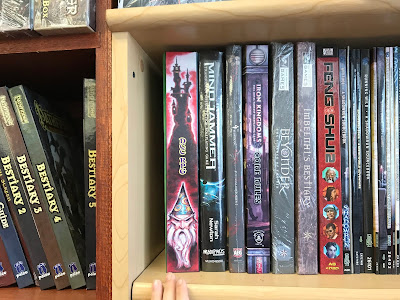 I really can't share much about today's game at the Games Keep in West Chester, Pennsylvania. Not because I don't want to, but because we took part in a playtest of Brendan LaSalle's adventure The Inn at Five Points. Hell, I think that even sharing that much may be too much.

We'll see if I get struck down by the Dark Master.

Anyway, here's what I can say. The adventure started off at Black Sand Port, with the party invited by Princess Kaeko of Fu Lamia to join on a quest for the Explorer's Guild. The team would need to travel to the Great City, however, which mean a week or so on the road headed west.

That's where the adventure took place... on the road.

I guess that's really all I can share, this being a super-secret playtest, and all.

But there were a lot of quotes!

"It's a good thing our second cleric isn't here." - Will, missing Bueno's healing abilities with a TPK nearly in process.

"I have no healing magic. I only have fish." - Will only speaks the truth.

Sound's fishy to me." - Now we've got Ryan joining in the fish talkin'.

"You never know when you need a sack of dead minnows." - Steve James the Ichtyomancer (played by Will, obviously.)

"I have a nine foot and eleven inch pole." - Because Steve James lost an inch.

Ryan: "TPK!"
Cody: "That should be the name of the adventure."

I wonder if the Black Crows could help with this." - Rob meant his book of Black Crows, not the band.

Will: "Why walk when we can summon an eel escalator?"
Cody: "Because it's slower."

Either Moon Slaves of the Cannibal Kingdom or Blood for the Serpent King.