Why Am I Keeping This Game? 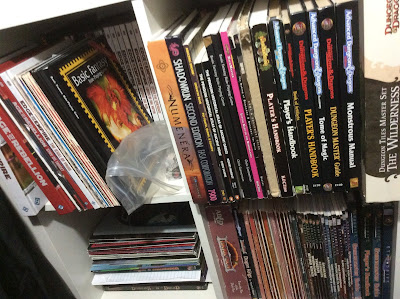 I'm not sure whether it's some early sign of a bizarre mid-life crisis, or just a subconscious rejection of some facets of consumerism, but I recently kicked off a quest to downsize my gaming collection by a sizable margin. Selling off pieces of my collection isn't a new thing for me. When I went from AD&D 2nd Edition to 3rd Edition, I sold off some of my old materials. The same happened when I went from 3rd to 4th. And then 4th to Savage Worlds and the Cypher System.

But this time it feels different. More urgent.

It all started a few months ago as we approached our big move from Pittsburgh to Philadelphia. Obviously we needed to make room, and I needed a little extra cash. So I dug through all my old books, found some of the more collectible, yet idle pieces that I owned, and sent them on their way to friends all over the country.

I started the process again a few weeks ago as a means to offset my Savage Worlds  Adventure Edition Kickstarter backing. I wanted to go "all in" but we're also on a budget to buy a new house. If selling off Planescape and Dragonlance books would help me update a system that I was actively playing, I was all for it.

But all these recent book sales have had a snowball. I kinda wanna to keep goin'!

I noticed that some of the games I was selling off hadn't even been played. I just collected them for the sake of collecting. I know I'm not alone in this part of our hobby. Pretty much every gamer I know has a stash of stuff that's just reading material, or maybe just something that completes a particular series of sourcebooks or settings. But this week my habitual collector brain broke, and I took a long, hard look at stuff that I have just sitting around.

Maybe more of my collection needs to find a new home?

Take my Fantasy Flight Star Wars collection. I've played Edge of the Empire and Age of Rebellion for maybe a total of ten sessions. I can't stand the dice mechanics, and the rules are way too crunchy for me. So why am I keeping all the books? I have just about everything for Edge of the Empire. I just kept collecting it as new books rolled out. I think it needs to go.

Hell, I may ship the X-Wing miniatures off as well. They just take up space. Plus I don't want to upgrade to the new edition.

I've still got a lot of old AD&D 2nd Edition stuff, some of which I know other folks are on the hunt for. Am I just keeping these around for a collection's sake? I'm not going to be running Ravenloft again anytime soon. If I want gothic horror, I'd prefer to do something with either Rippers or Accursed (both Savage Worlds).

I've always been a big fan of Firefly, and I own just about all the Firefly and Serenity RPG stuff. Am I going to run that? Doubtful. No desire to learn yet another system, even if the source material is so close to my heart. There was a time when I wanted to have "everything Firefly" but I've got everything for the board game, and that should be enough.

These are just snippets of a collection that continues to grow as each and every Kickstarter fulfills.

Even if I pare down my collection, perhaps limiting it to a single 4 by 2 Kallax (currently it's triple that size), keeping only the games and systems that I am actively playing at this moment... I still have more settings, adventures, and plot point campaigns, than I'll ever be able to play through.

That's where the mid-life crisis thing is kicking in. Frankly it's a little chilling.

Recently I was thinking about taking a rush at the four main Deadlands Reloaded plot point campaigns. I have all four hardbacks (The Flood, The Last Sons, Stone and a Hard Place, and Good Intentions), and gee, it'd be great to run the gauntlet! But from what I'm hearing, it'll take a year just to dig through The Flood, and that's with a weekly campaign.

Well, it's next to impossible to get a weekly thing going as a grown up with responsibilities.

So let's say it takes two years. Two, four, six, eight years from now I could have all of these completed. Throw in the rest of the plot point campaigns that I have, and that I really want to play, and I'm looking at probably fifteen years of Savage Worlds gaming.

What about the other stuff I've got? When all is said and done, Peril on the Purple Planet will have taken our monthly DCC group about eighteen months. We only scratched the surface of the Chained Coffin. Lankhmar ain't even here yet. At least I've worked my way through a lot of the DCC modules successfully, but with each one that I finish, Goodman Games (and third party publishers) crank out five. At least.

I think there are another four Cypher System settings coming out right now after the last Kickstarter right? Talk about cranking out the goodness!

Sorry, at this point I'm just ranting and I'm not really sure why. Personally, I love all of these options. We live in a golden age of gaming. There's more to be played than we can ever play, and I think I'm just now realizing it, and it's scaring the hell out of me. To play everything that I want to play I'd need to make it a full time career, and that's just not feasible with a wife and family. I'd need to be some kind of true Nomad Judge, living in a teardrop trailer driving around from city to city running games for people. Damn, that'd be awesome!

Enough rambling, let's talk about your shelves! What games do you own that you know you're never going to play? Why are you keeping them? What do you plan to do with all those sourcebooks and modules? What's keeping you from selling them or even just giving them away?
Posted by Living 4 Crits at 6:34 PM