Elsa, a Graceful Nano who Wears a Sheen of Ice
Anna, a Swift Jack who Entertains
Milo, a Learned Nano who Talks to Machines
Tonto, a Mystical Jack who Lives in the Wilderness 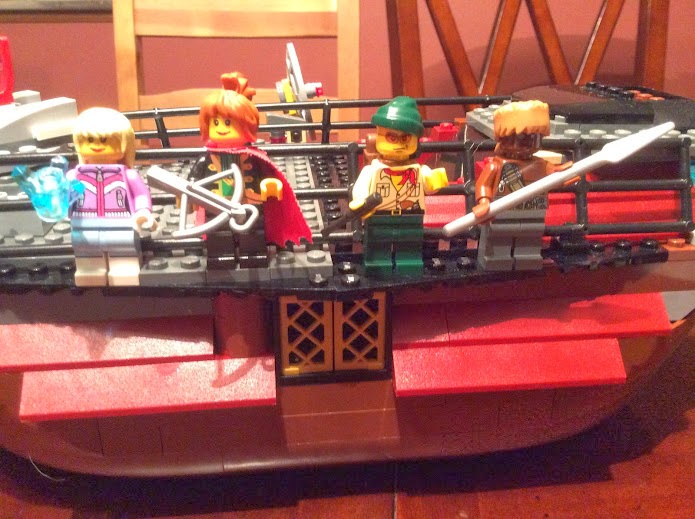 A billion years beyond "once upon a time" the Silver Comet was gliding across the waves, heading south for the coast of Ancuan.  Commodore Jek Sperro was assisting Merida in piloting the craft, which was towing the pirate's cyphic vessel, the White Onyx.  The craft was making excellent time, and just a few hours prior they picked up a few hitchhikers who were on a deserted beach: Milo and Tonto!  Always eager to help out some friends, Elsa and Anna helped the two onto the craft and continued their voyage.  When a storm arose on the horizon, however, the team became mighty fearful.  Five waterspouts appeared almost out of nowhere, forcing the Three Princesses of Nihliesh to turn the craft quickly and see if there was a way around the storm.  Sensing something amiss in the water, Elsa took some rope and climbed down to the water.  To her horror, she saw that there was a strange creature floating just off the starboard side of the craft.  It looked like a bunch of eels, an octopus, and a crocodile merged into one unified creation.  Riding atop this "thing" was Mr. Smee! 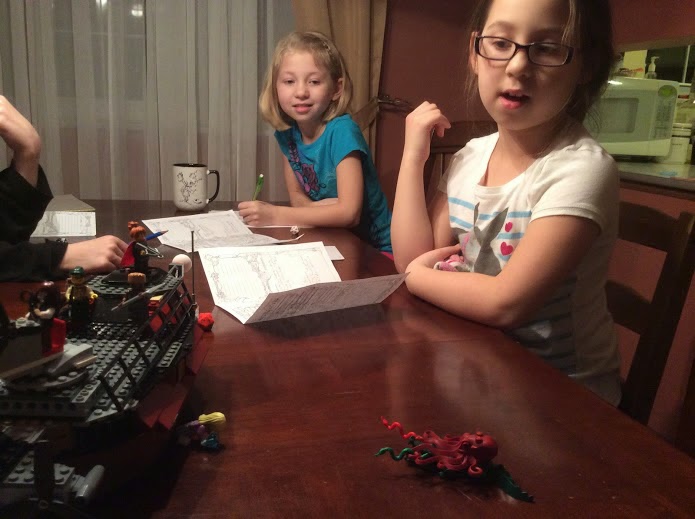 Carie and Evie were horrified at Elsa's discovery in the water 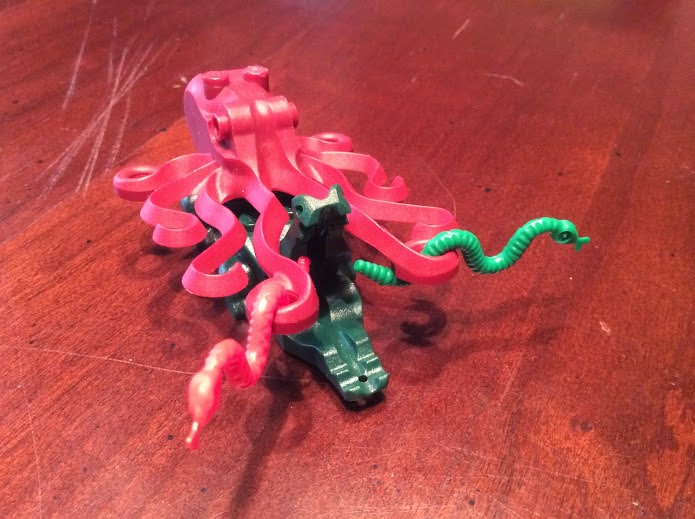 The octopus looked dwarfed by the much large creature it was sitting upon.  Mr. Smee told the party that the hybrid creature he was with was Ursula the Sea-Nano, the most powerful science-sorcerer of the seas!  Ursula was the mother of the Kinkrak the party defeated, and was also Mr. Smee's second cousin, and so she was out for revenge.  It was obvious that Ursula was creating the storm, but when this had no effect on the amazing ship faring skills of the princesses, she turned her tentacles and cyphers to the water itself.  Aerating the water excessively, the bubbles created a dreaded "suction", dragging the heavy dagger-craft below the waves.  Although they would've preferred to stay and fight, when Commodore Jek Sperro bolted into the Silver Comet, the rest of the team followed suit and battened down the  airlocks.  Slowly the dagger-craft sunk, over a hundred feet to the bottom of the waves.

While the party had no idea what was going on topside, they soon realized that they were in quite the pickle.  Even though the Silver Comet had many amazing features, it was still a discovery, a craft with many strange and mysterious workings that no one understood completely.  Milo was able to connect with the craft using his special talents, and figured that the Comet could't operate without exposure to air.  It may have been air-tight, but it certainly wasn't a Red-Fleet submergine!  At least he could connect somehow with the White Onyx.  First Milo operated the grappling hook on top of the craft to dig into the ground and then drag the entire ship closer to the submersible.  Once near enough that the swim from one craft to the other wouldn't be too daunting, Milo opened the energy door on the submersible remotely using his brain, and then the party opened the airlock door.  While water rushed in Milo struggled to get out, and then the door was closed behind him.  Swimming over to the Onyx, Milo got the craft running.  He was soon joined by Elsa, who followed not far behind him, and the two piloted the vessel, with the Silver Comet in tow, to the surface. 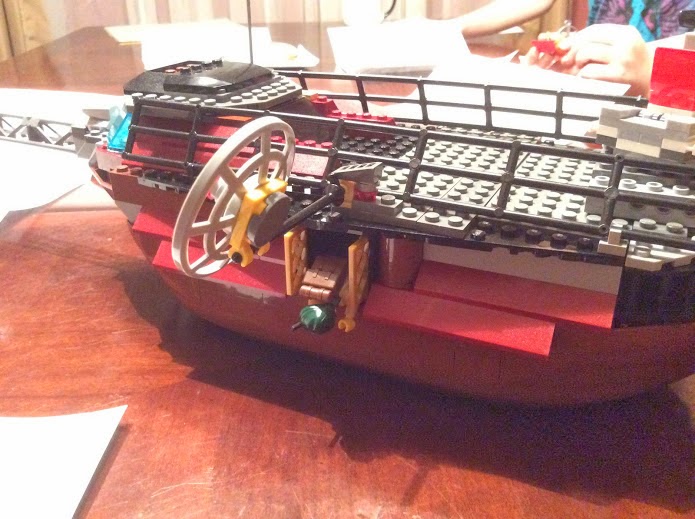 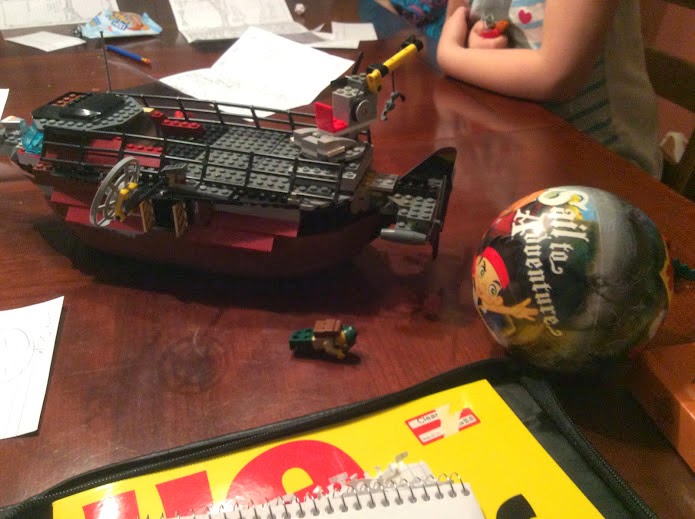 .. and makes his way to the the Commodore's submergine (yes, we used a Jake ball)

Once the Silver Comet was above the waves her engines started back up again and power coursed through the vessel's engineering section.  But Ursula the Sea Nano was still there, and she seemed quite angry that the party had manage to escape from her trap!  Quickly Ursula "split up", with two of the strange "eelagators" breaking off from her body while the writing smaller eels stretched out elongating her tentacles.  To defend their ship, Tonto and Anna rushed to the deck and took up defensive positions.  Ursula "fired" one of her eel-tentacles onto the deck, an attack similar to what her Kinkrak son could do.  But these tentacles seemed much easier to defeat at first, and Tonto speared it to death with one blow.  The two eelagators were trying to climb the sides of the vessel, but Anna used her crossbow to shoot one, and knock it back into the water.   Not wanting to stay out of the fight, Elsa took control of the sonic cannon on board the White Onyx.  She fired a direct shot on Ursula, with a shockwave washing over the two eelagators that were half in the water still.  While Ursula tried desperately to regain her senses, Milo drove the White Onyx at full speed straight at the Sea Nano, hoping to ram her but missing.  On board the Silver Comet both Anna and Tonto were feeling pretty good about their chances in this battle! 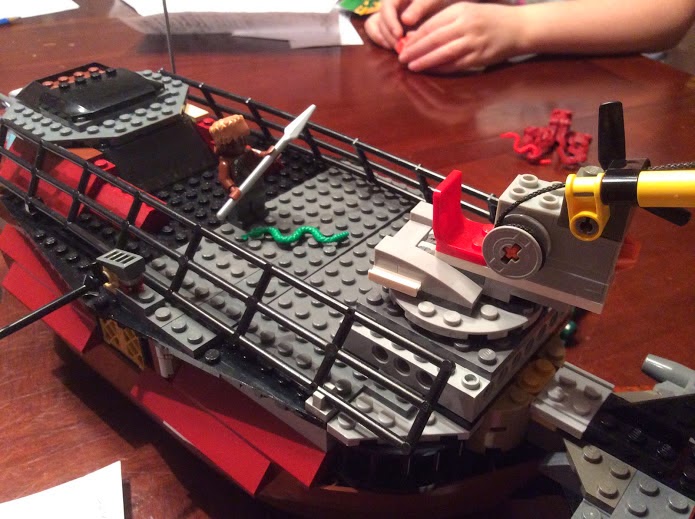 Milo fights off the first eel-tentacles with ease 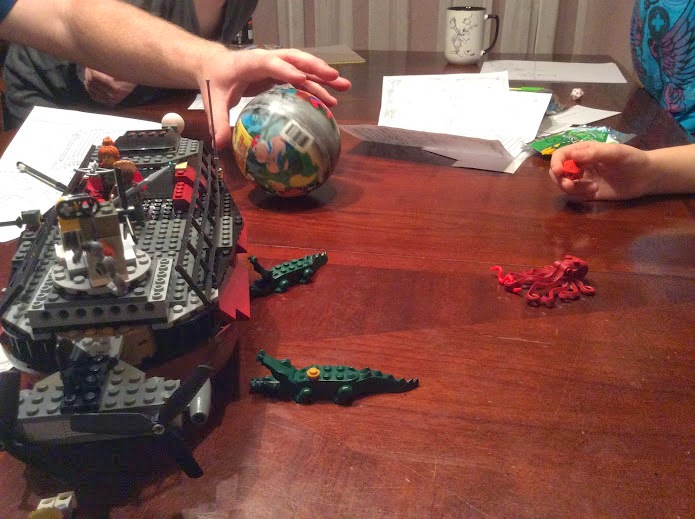 But the eelagators were coming!

But then the course of the battle shifted.  Tonto would strike one of the eelagators with his spear, trying to keep it from boarding, but when his weapon touched the beast, he too was injured as electricity coursed through his body.  Then Ursula regained her ability to attack she fired another eel onto the deck.  This creature struck Tonto, impairing his ability to fight severely.  Soon both eelagators were climbing onto the deck, and the battle became more desperate.  In the waves, Elsa prepared for a finishing blow with the sonic cannon, but the weapon backfired destroying the White Onyx, which started to sink.  About the same time that one of the eelagators dragged an incapacitated Tonto into the waters below, Elsa and Milo abandoned ship. 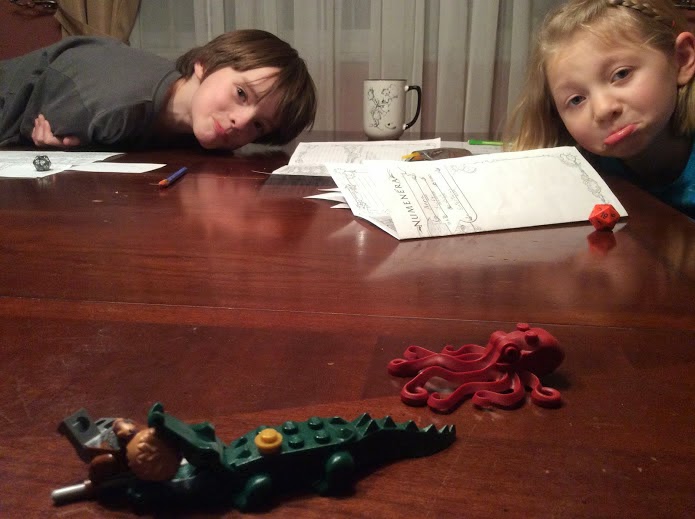 Dylan and Carrie were not happy with Tonto's GM Intrusion

Elsa swam towards Ursula to have a nano-versus-nano encounter while Milo saved Tonto with the help of Commodore Jek Sperro and the grappling arm.  Anna was able to finish off both of the eelagators with her crossbow, and managed to successfully dodge their jaws.  The nano battle was luckily one-sided, with Elsa's powers winning out over the evil octopus's.  Knowing that she had been defeated Ursula tried swimming out to sea.  But Milo was a fast swimmer himself, and since the octopus was injured he was able to catch up to her and shank her in the back with his dagger.  Everyone got back aboard the Silver Comet and the party celebrated with some hot chocolate and waffles. 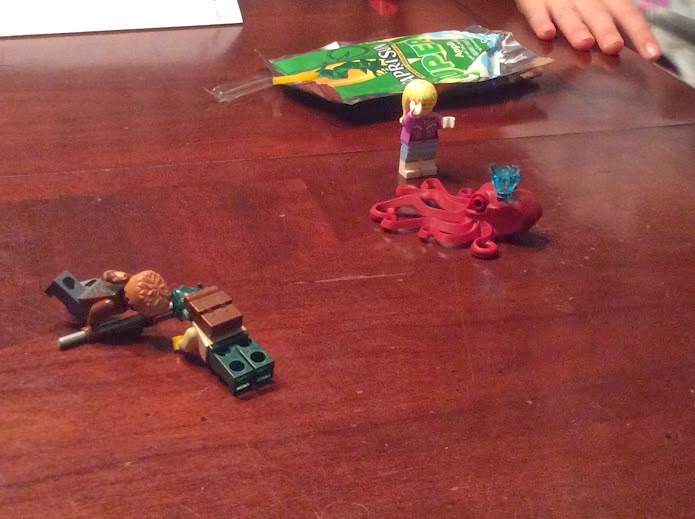 Milo saves Tonto while Elsa tells Ursula to chill out! 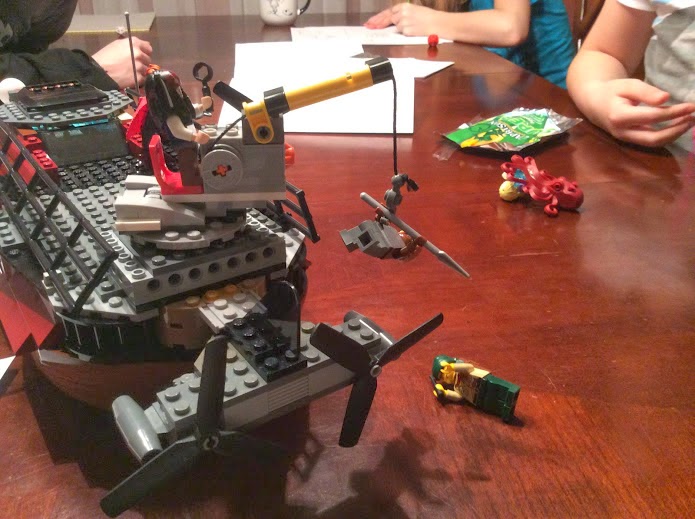 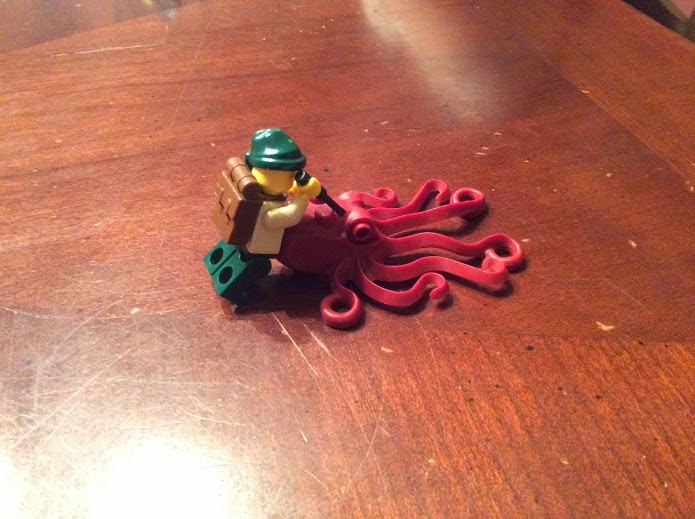 Milo had enough of Ursula's crap

"Crockosnaketapus!" - Craig was flabbergasted by the GM's Lego creation.

Dylan:  "If we are underwater, wouldn't the pressure crush the glass and…"
GM: "You're not that deep underwater"
Dylan:  "Darn!"

"I'll pay for it… I'm a princess." - Elsa to Milo after blowing a whole in the White Onyx with the ship's sonic cannon.