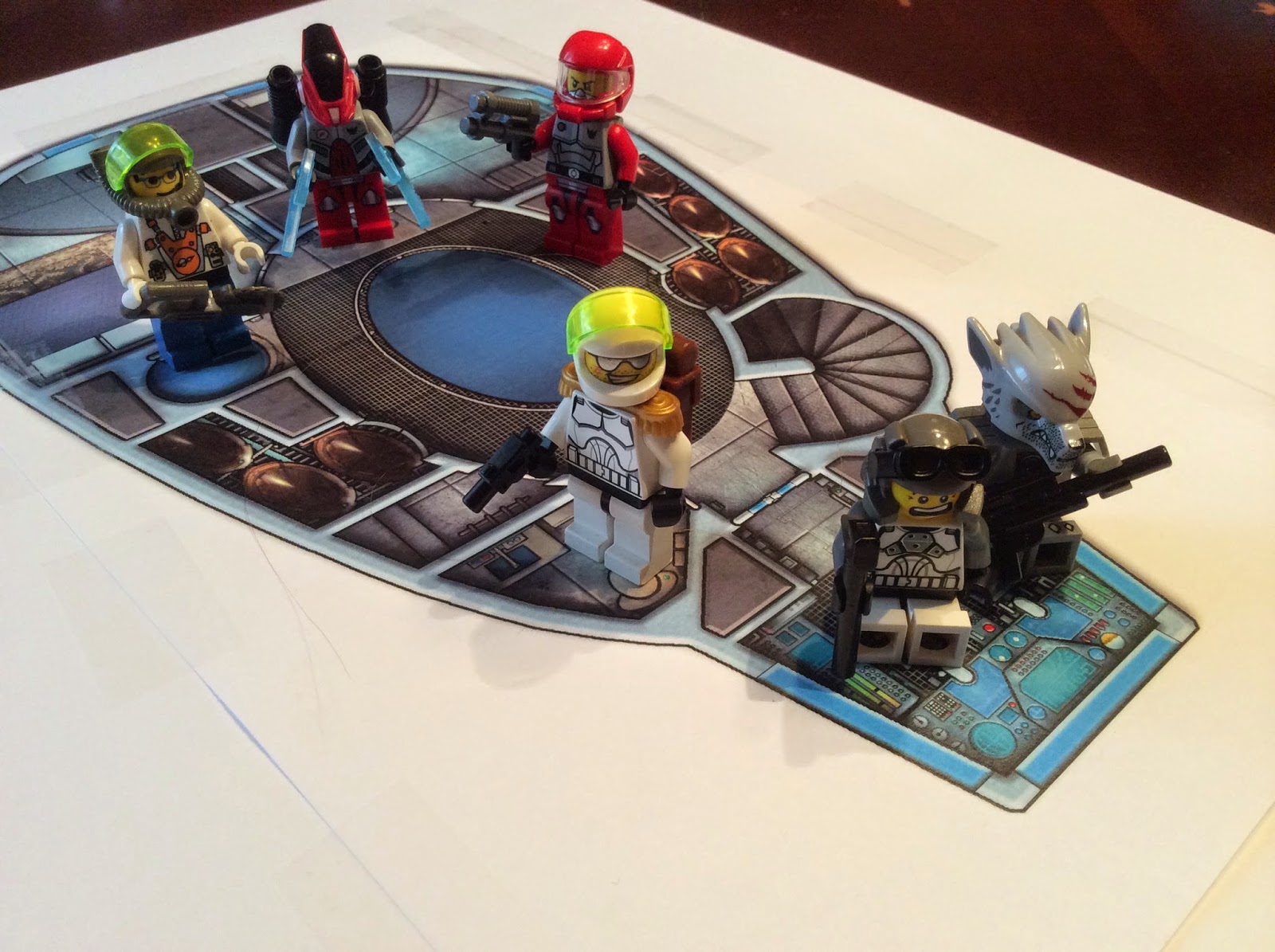 It's a matter of perspective.  To you, dear reader, this tale takes place in the future - 500 million years in the future to be exact.  But to those of us who live in the Ninth World this is a story that was created an equal amount of years in our past. To those who lived in this "prior world" it was the year Gate +351, 351 years since the first gate was created in the Small Magellanic on the Seed World of Agreon.  In this time period humanity had been banished to the Small and Large Magellanic Clouds by the Void Empress, a strange alien entity who had taken control of Earth and most of the stellar domains that once were under the protective arm of a human civilization that spanned the entire Milky Way.  Stripped of FTL technology humans were placed on Seed Worlds, planets that were barely considered habitable, without the ability to communicate with other Seed Worlds.  This changed when the first Gate was created, allowing humans from one Seed World to communicate with and travel to another.  Soon Gates appeared all over the Small and Large Magellanic Clouds, and bare-bones human civilizations flourished.

To support the worlds of the Small Magellanic Cloud, an SMC Confederation (SMCC) was formed, along with a small naval fleet to venture out into the stars.  Left very much alone by the Void Empress, the SMCC's primary goal was to continue gaining more ships and technology to elevate humanity out of it's degradation.  Despite having the Gates, the worlds of the Small Magellanic Cloud were still quite resource poor in comparison to the Milky Way.  Although Varjellen merchants were more than happy to trade advanced technology with the SMCC, scavenging resources was still the main goal of the fleet.  This was the mission of the crew of the SMCCS Vindicator as it entered the uncharted star system of an experimental Seed World.  This particular world was previously unknown to the Confed intel sources, but rumors from the Varjellen were that DNA from long-extinct creatures from Earth were said to have been placed on the world, creating a sanctuary of the past.  The SMCCS Vindicator came across a derelict transport craft in the system, in a high orbit around the Seed World, but no communication could be made with the ship.

Captain Bastille of the SMCCS Vindicator placed her dear friend Commander Iceman in charge of the mission to board the transport, uncover the reason for it's current predicament, and pilot the craft back to Agreon as a prize.  Iceman put an away team together consisting of his muscle Gunner, his medic Bones, his engineer Fritz, his alien scout Growler, and his cybernetic pilot Spot.  They boarded one of the Vindicator's shuttlecraft and docked with the derelict craft. 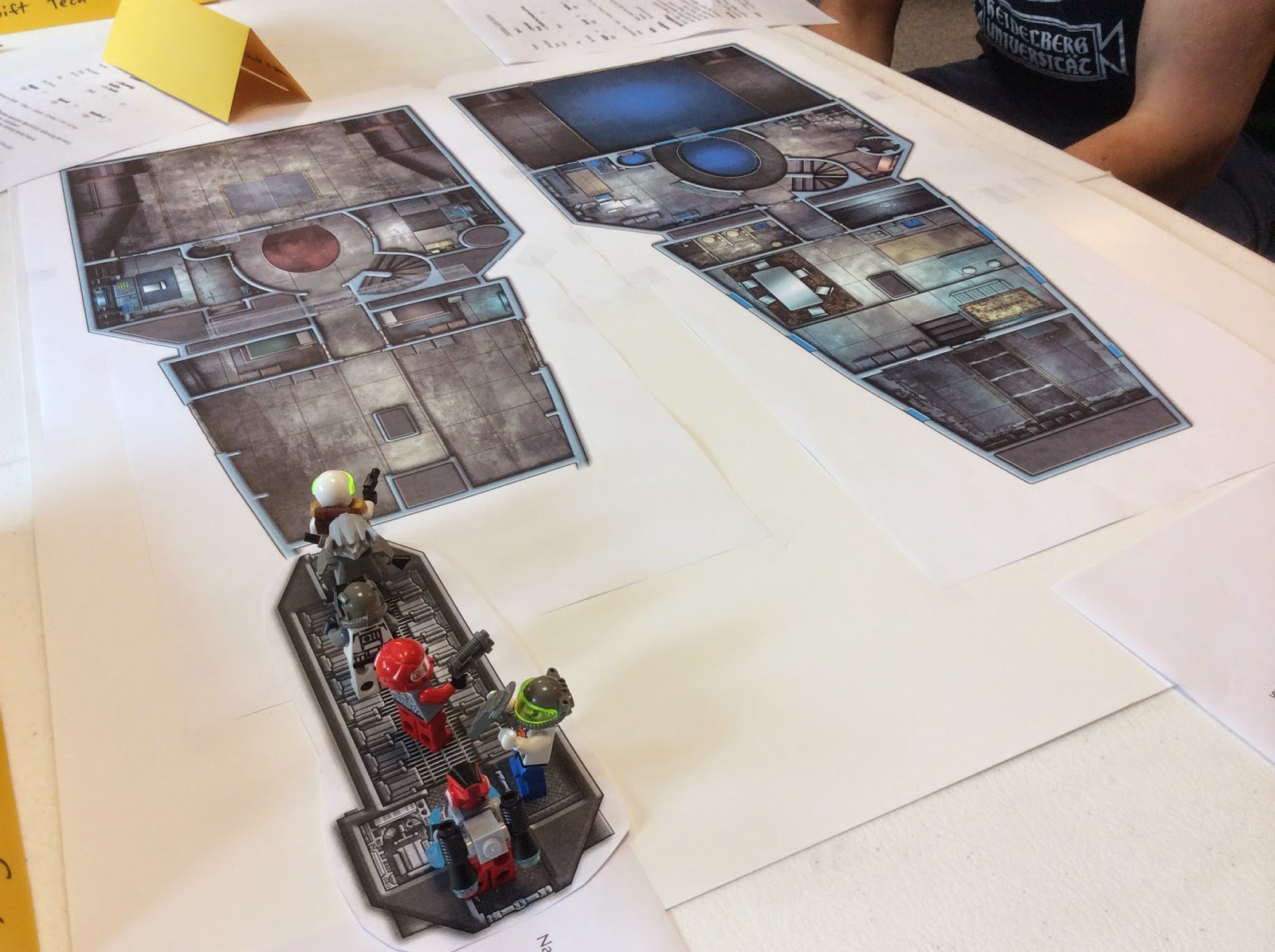 Iceman was an honorable officer of the Confed Navy, and he was proud to be the first one to board the craft.  When Fritz used his connection with the Datasphere to access the derelict's docking control panel he quickly hacked it and gave the crew it's first view of the ship's interior.  But before Iceman could board the giant head of a dinosaur shoved it's way into the shuttle!  Despite his training, Fritz panicked, and before Growler could tell the rest of the team that the beast as an herbivore, the tech closed the door on the thing's head.  Pinned for a moment, the stegosaurus yanked it's head free and began to rampage in the cargo compartment.  Although he didn't relish having to fight the giant creature, Iceman commanded Fritz to open the door and then he bolted in, charge pistol blasting.  Growler followed his commander's lead, charging in with his rifle firing away.  Each was having a rather hard time dodging the lashing spiked tail of the creature, and Growler even managed to get slammed in the face at least once.  To soften up the mammoth, Fritz took a look in the room and shorted out all of the electrical circuitry in the floor and ceiling directly above the dinosaur, causing it incredible damage, and knocking it off to it's side.  Burned, terrified, and in extreme pain the stegosaurus could not get back to it's feet, which made it an easy target.  Gunner had no empathy for the creature.  The tough and brooding soldier walked right up to the dinosaur and put a gauss blaster round through it's skull.  No hard feelings. 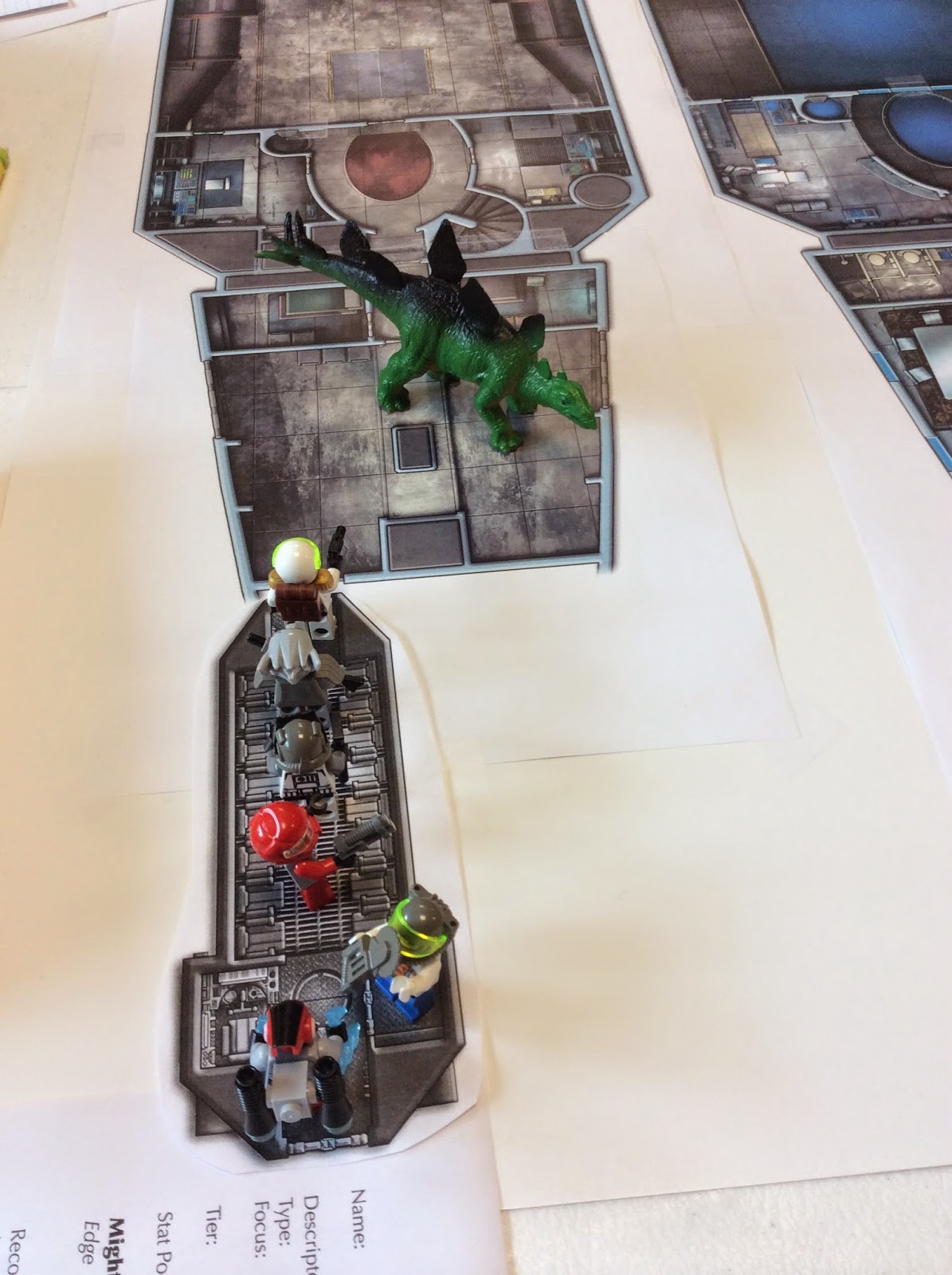 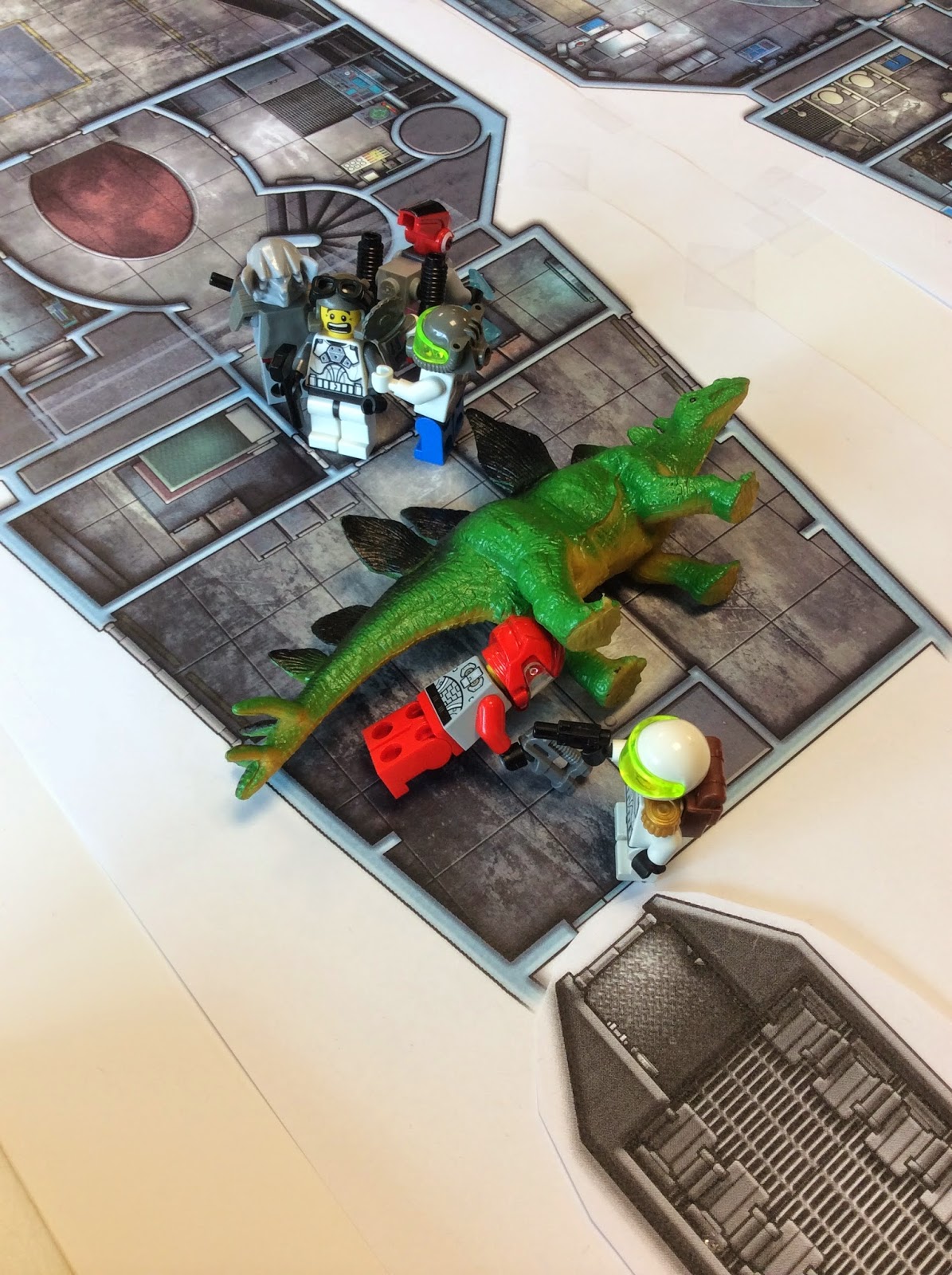 Time to move further into the ship, while Gunner harvests some meat.

The crew quickly started exploring the compartments adjacent to the forward cargo hold.  Spot connected with an access panel in the cargo chamber and figured that there were computers in one of the rooms further into the ship that could possibly give more information as to it's mission and purpose.  There were some weapons, guns and bayonets in a few lockers, but the real "find" was in the two crew chambers.  One held a dead crew member who had been impaled by something large and painful.  She didn't last long after getting stabbed and must have come back to her room to die.  An opposing chamber was barricaded from the inside.  Lucky for the crew, Bones had an amazing saw that could cut through any material.  Quickly he severed the door from its hinges, revealing another dead crew member, who had apparently starved to death locked in the chamber.  Whatever awaited him in the ship was more terrifying than a death from lack of food and water.

Moving further into the craft the party came to a large three-storied central room that connected all of the floors of the craft.  Using his night-vision stim, Growler had a full view of the chamber, and noticed quite a lot of guano on the floor of this chamber.  As Iceman and Gunner entered the room they saw that a sleeping pterodactyl was perched a level above everyone.  Wanting to be stealthy, and needing more information, Spot and Fritz carefully crept along the wall of the lower level and snuck into the starboard computer chamber.  Once connected, the two were able to uncover a lot of information regarding this ship.  Commissioned the "Festivity", the transport craft was under the control of the Gastric Pirates, a rogue band of space-poachers who raided exotic Seed Worlds for creatures to carve up and sell to special restaurants throughout the Small and Large Magellanic Clouds that specialized in that sort of fare.  But what the crew of the Festivity picked up on the small Seed World below must've been too large to handle.  Dinosaurs from Earth's past were tagged, tranquilized, and loaded onto the Festivity, including the pterodactyl, some velociraptors, the stegosaurus, a tyrannosaurus rex, and something of unknown origin.  Somehow the crew lost control of the craft after they left the Seed World's surface, and the vessel had been silently orbiting for five weeks. 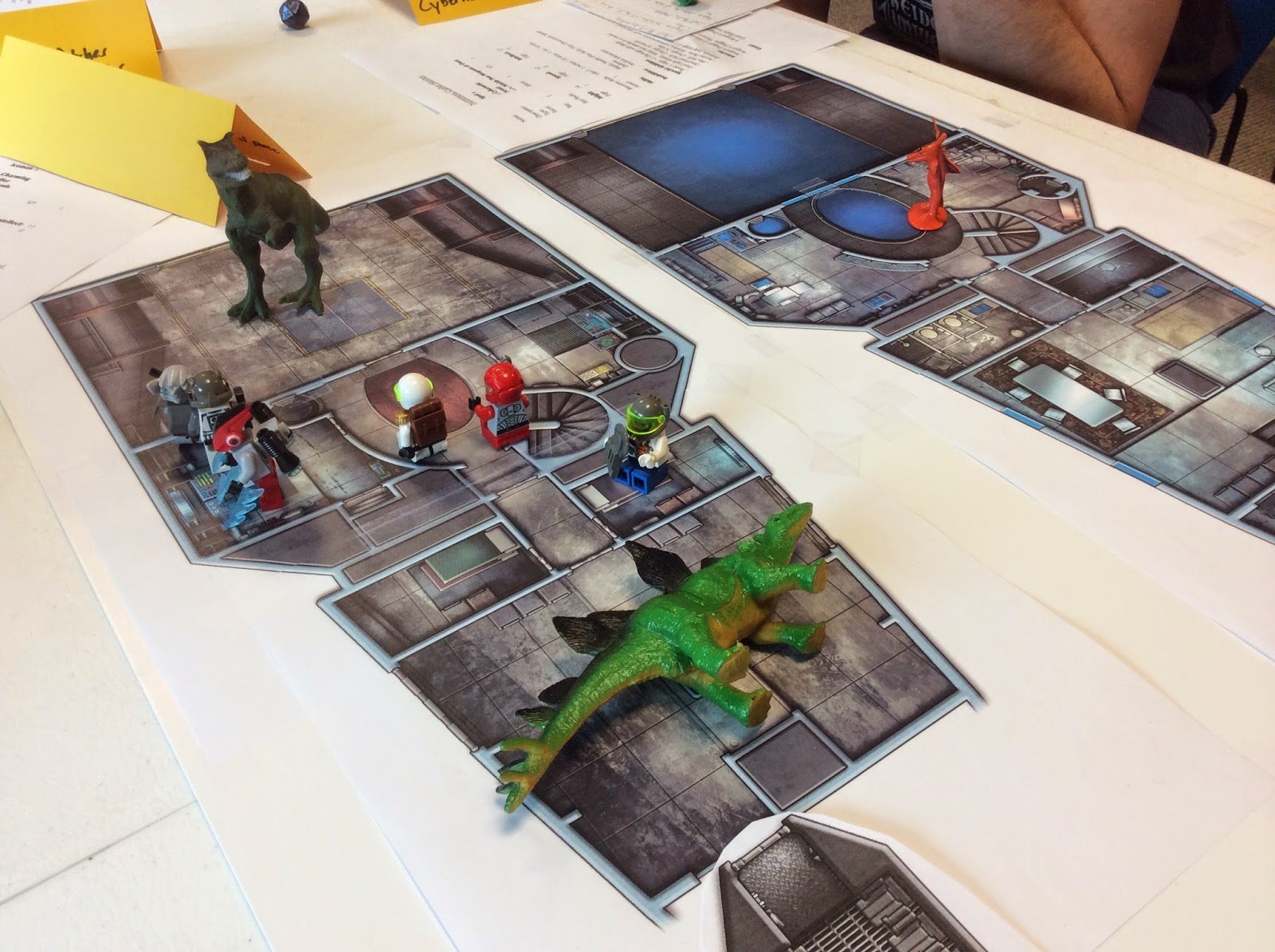 The party saw that the T-Rex was in the rear compartment, and decided to leave it alone… for now.

Knowing that they had to deal with the pterodactyl and raptor threats before they could get control of the craft, Spot used the combination of the darkness and his innate abilities to hide in the dark to sneak up behind the winged dinosaur and stab it ferociously with both of his blades.  The dinosaur screeched in pain, but when Spot went to land a finishing blow he fell over the edge of the railing and was dangling.  Although the rest of the team was able to knock out the flying dinosaur with their guns and meet up with Spot, the previous commotion lead to a team of four velociraptors entering the second level of the craft from a forward chamber. 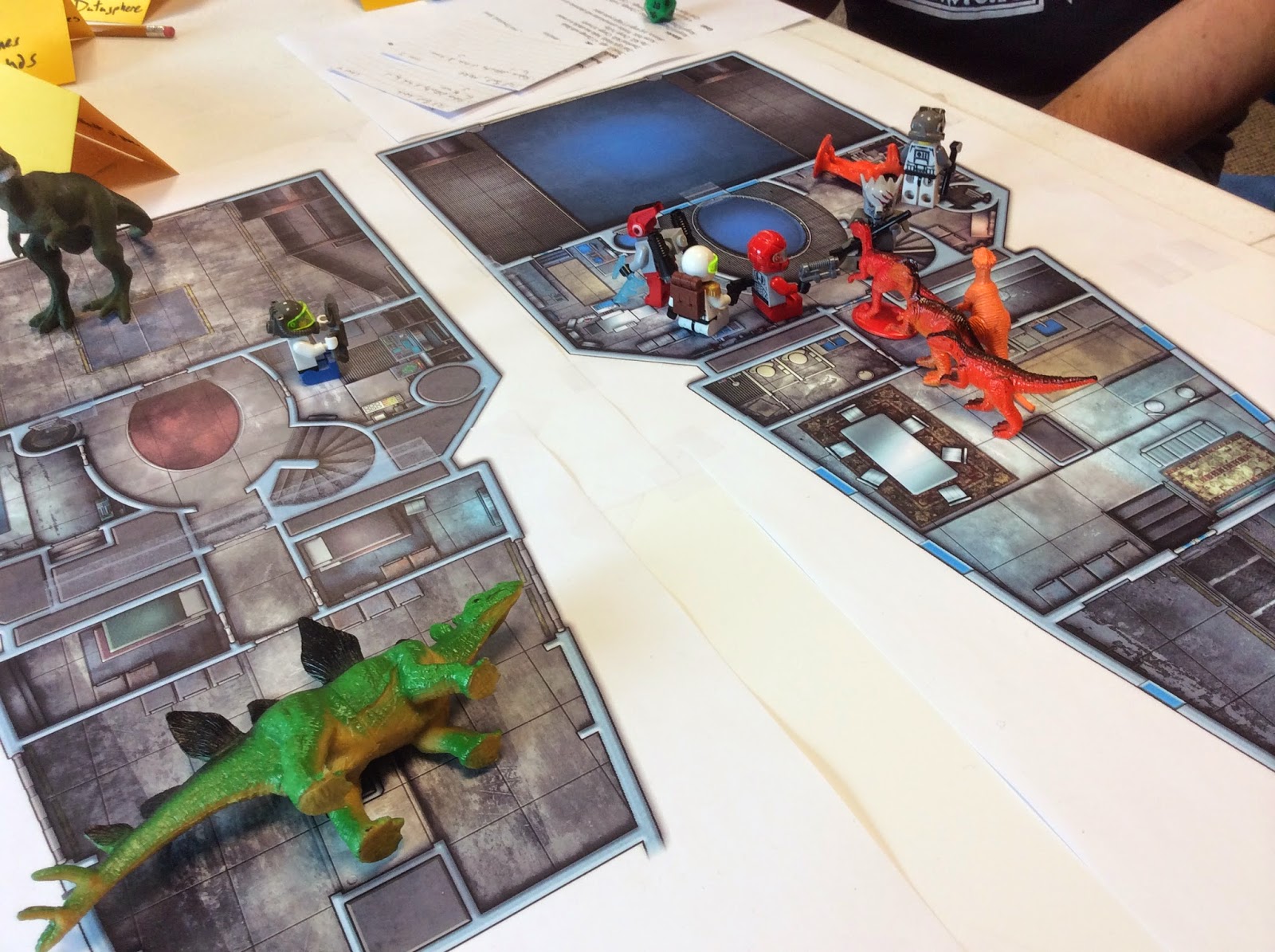 A cellular disrupting explosive fired from Gunner's stim gauntlet sloughed skin and tissue off of each of the raptors, which threw them into an absolute frenzy, despite their horrific injuries.  Believing himself to be unstoppable at this point, the cybernetic spot pulled out both of his Kurgan daggers and charged into the fray of raptors, slashing at two of them, dispatching one, and then slid under a nearby table.  Fire support from the team knocked out a second raptor, but then an ominous sound echoed through the room.  An armored Amphibeing must have been picked up by the poachers, and was most likely the creature that slew the rest of the crew, because it appeared right next to Fritz and stabbed the tech in the face, knocking him over the railing and to the lower level! 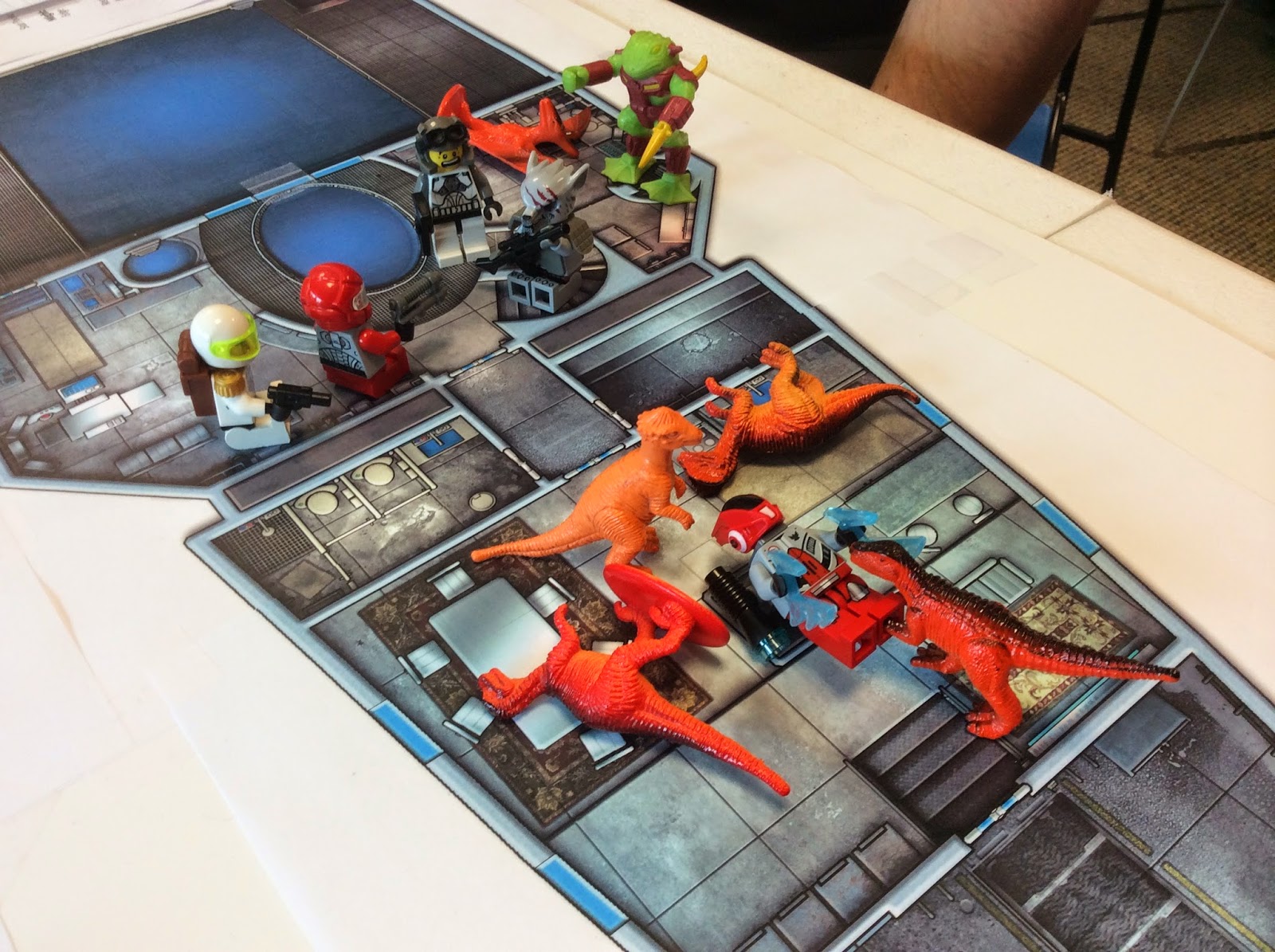 The Amphibeing appeared right after Spot laid into the raptors. 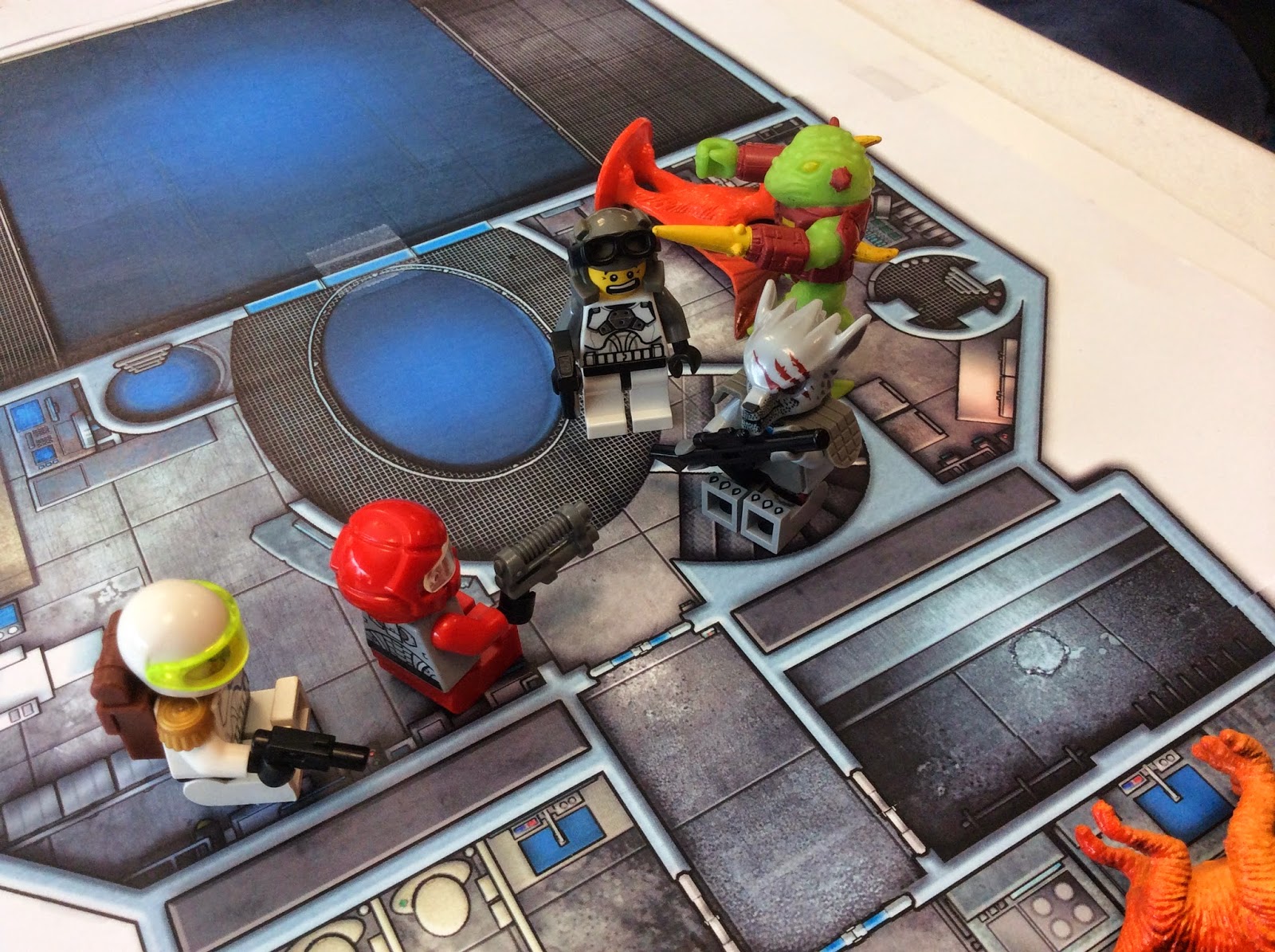 Fritz got stabbed right in the side of the head!

Commander Iceman and Gunner started blasting the Amphibeing with only minor success - the creature was heavily armored and had a massive body able to take a lot of damage.  Spot was left alone to deal with the remaining raptors, but that proved little problem for the cybernetic scout, who's daggers were far sharper than the claws of any dinosaur.  Each attack by the Amphibeing was truly devastating, so Iceman knew he had to use something serious to shut the creature down.  Employing his sticky-goo hunter-seeker, which had been mounted on his stim gauntlet, Iceman piloted the remote controlled missile right into the Amphibeing, completely covering it in green slime that quickly solidified.  Now it was easy for Gunner to use his gauss blaster on the Amphibeing.  Down below, both Growler and Bones came to Fritz's rescue.  Growler used a rejuvenator from his stim gauntlet on the wounded tech and Bones was able to mend the wounds further with his healing skills.  Growler knew that he was needed above, so the canin charged up the stairwell, rifle in hand and unloaded a clip into the Amphibeing. 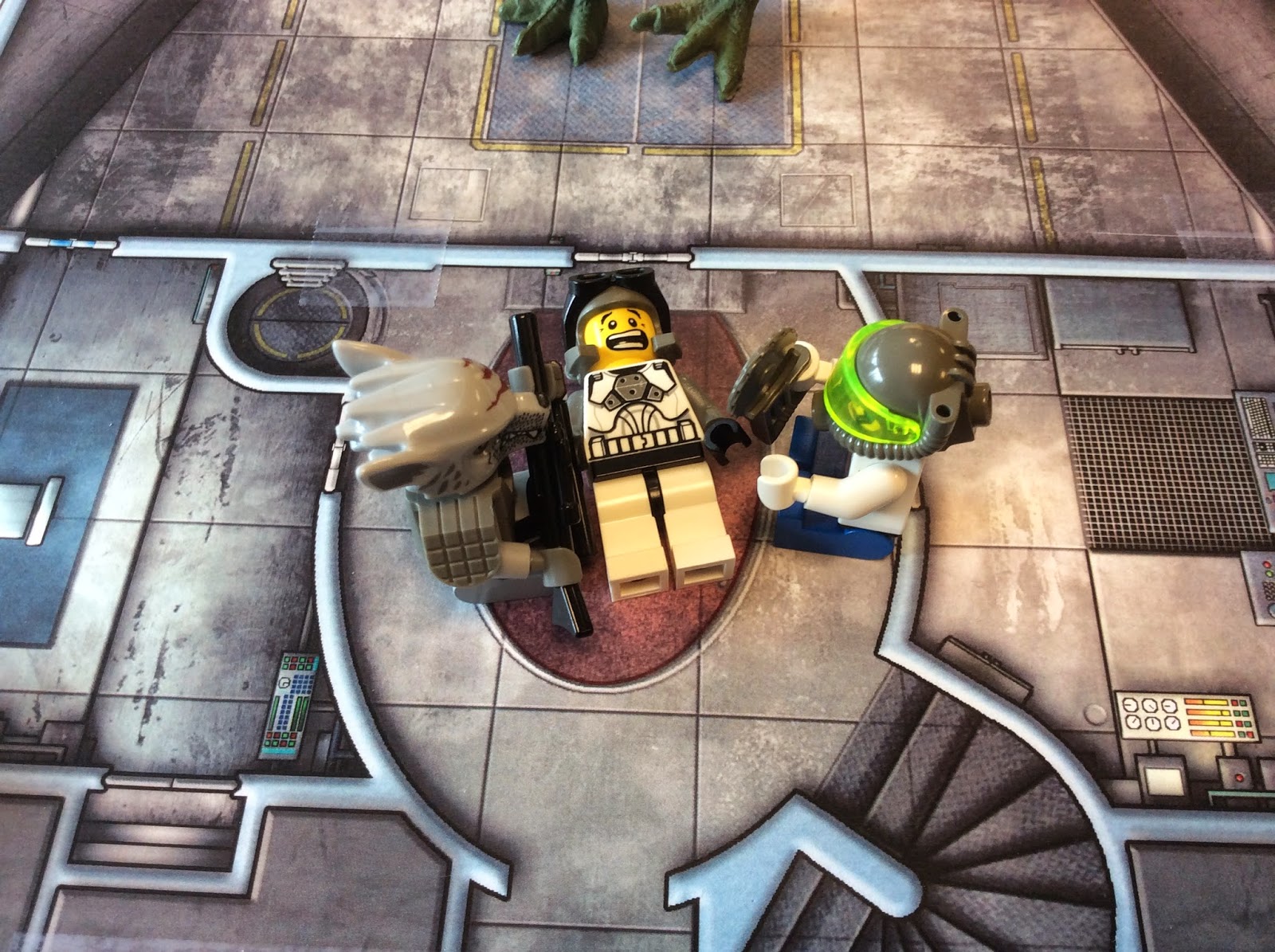 Growler and Bones trying to heal a frantic Fritz

Bones wanted a taste of revenge as well, and since the Amphibeing was still flailing about, using a low and guttural croaking sound to unnerve and scramble the team's sense of balance, the doctor whipped out his cutting tool and sawed the frog-man in half.  It was the only way to be sure.

Once the battle was over the team healed up and got command of the vessel.  Spot got behind the ship's control panel while Iceman started rounding up the rest of the troops… but Growler was nowhere to be found.  The canin had taken a great interest in the T-Rex in the rear compartment and had decided to go in for a closer look.  Hoping to perhaps ride the large and massive carnivore, Growler hopped down and introduced himself to the beast.  It was his hope to pacify the T-Rex, and gain a mount for future adventure, and in the end he was partially successful.  Growler did indeed placate the massive T-Rex, who had been quite hungry and was very grateful for the meal.

Stims & Stim Gauntlets = Cyphers.  Each player could load 2-3 stims onto their gauntlet.

Cybernetic, Handy, and Walks the Datasphere are out of Celestial Wisdom by Ryan Chaddock Games.  If you are interested in trying out these amazing descriptors and foci, as well as learn about all of the Data Gods of Numenera, make sure you pick this product up here:

The blueprints and images for the Morningstar and Midnight Rose are from 0 Hr's Future Armada line, which can also be found on DrivthruRPG.com:

If you don't know what Infinite Space is please check it out.  Probably my favorite space RPG and an amazing catch on the Nintendo DS: