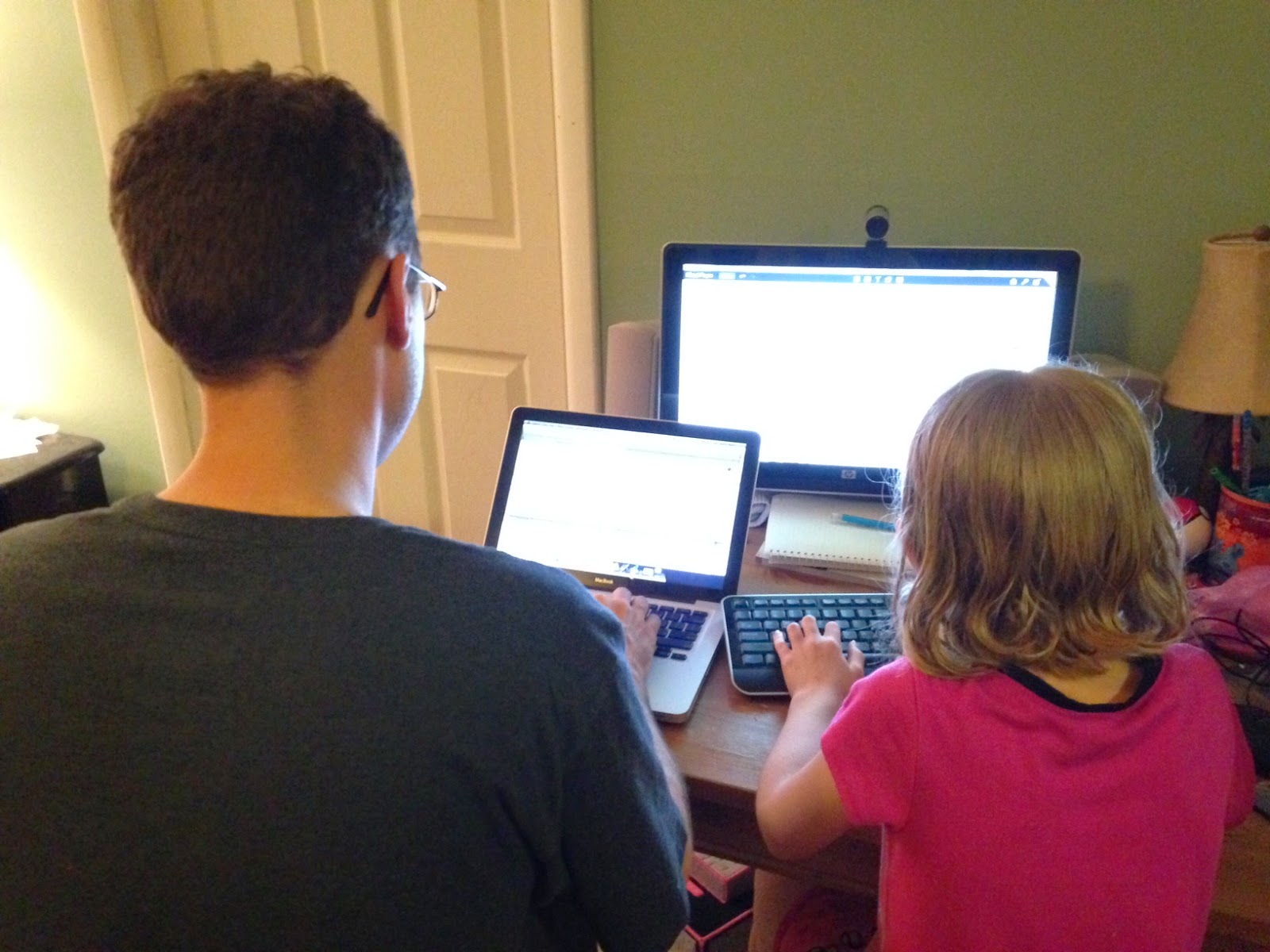 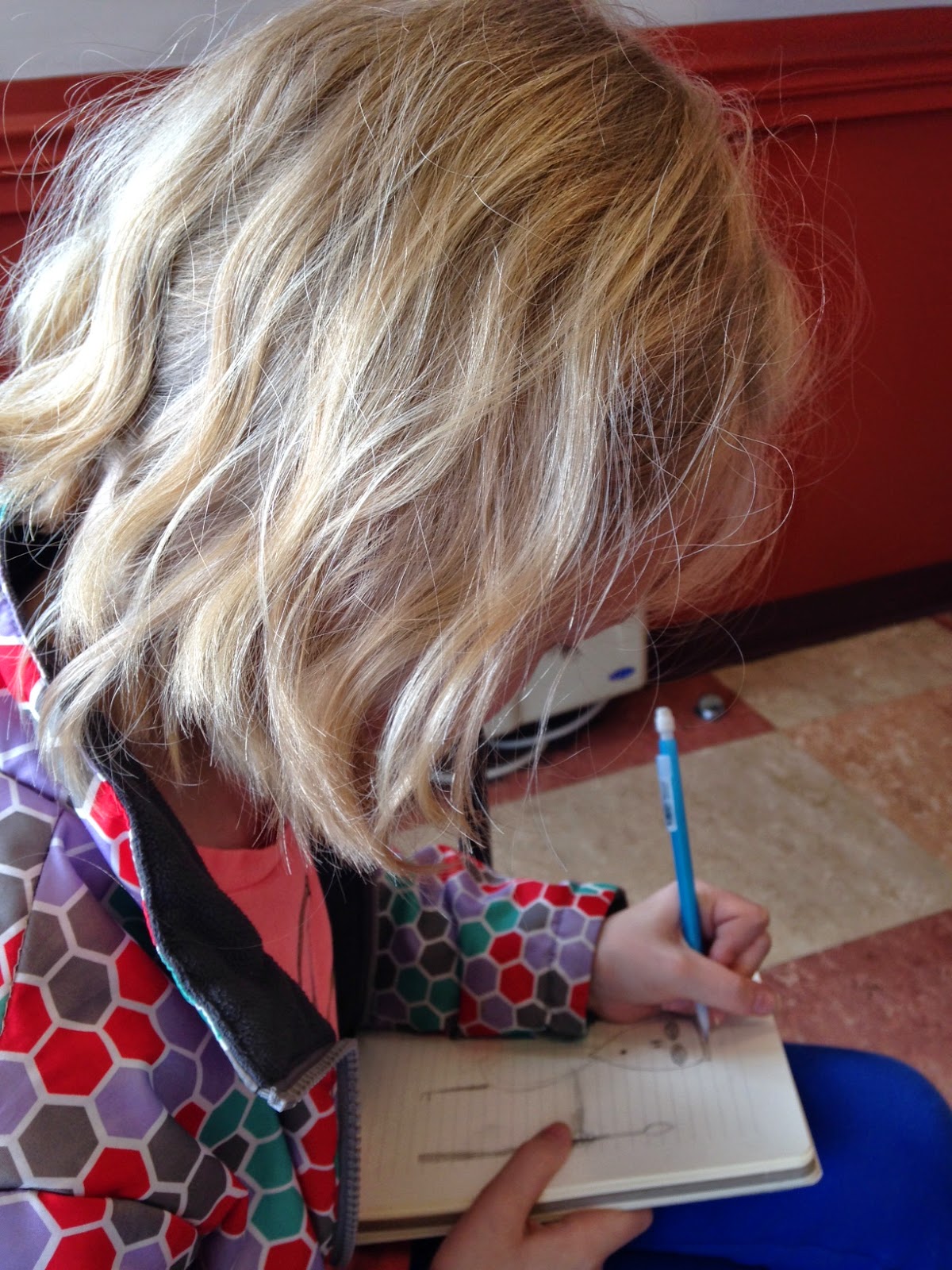 Sitting in a Jiffy Lube while my car was getting it's oil changed Carrie and I continued to work on the Aether's Light project while the manager peeked at our drawings trying to figure out what we were doing.  Ideas have been popping into our heads all the time, with the inspiration coming from all around us.  Since Carrie was sick and home from school the last two days suffering from a strep infection, she had a lot of time to continue sketching and scheming.  Looking at the sketches that we did of the species earlier in the week, we decided to finish tackling the Inkami while digging into the history and details of the Ajordo. 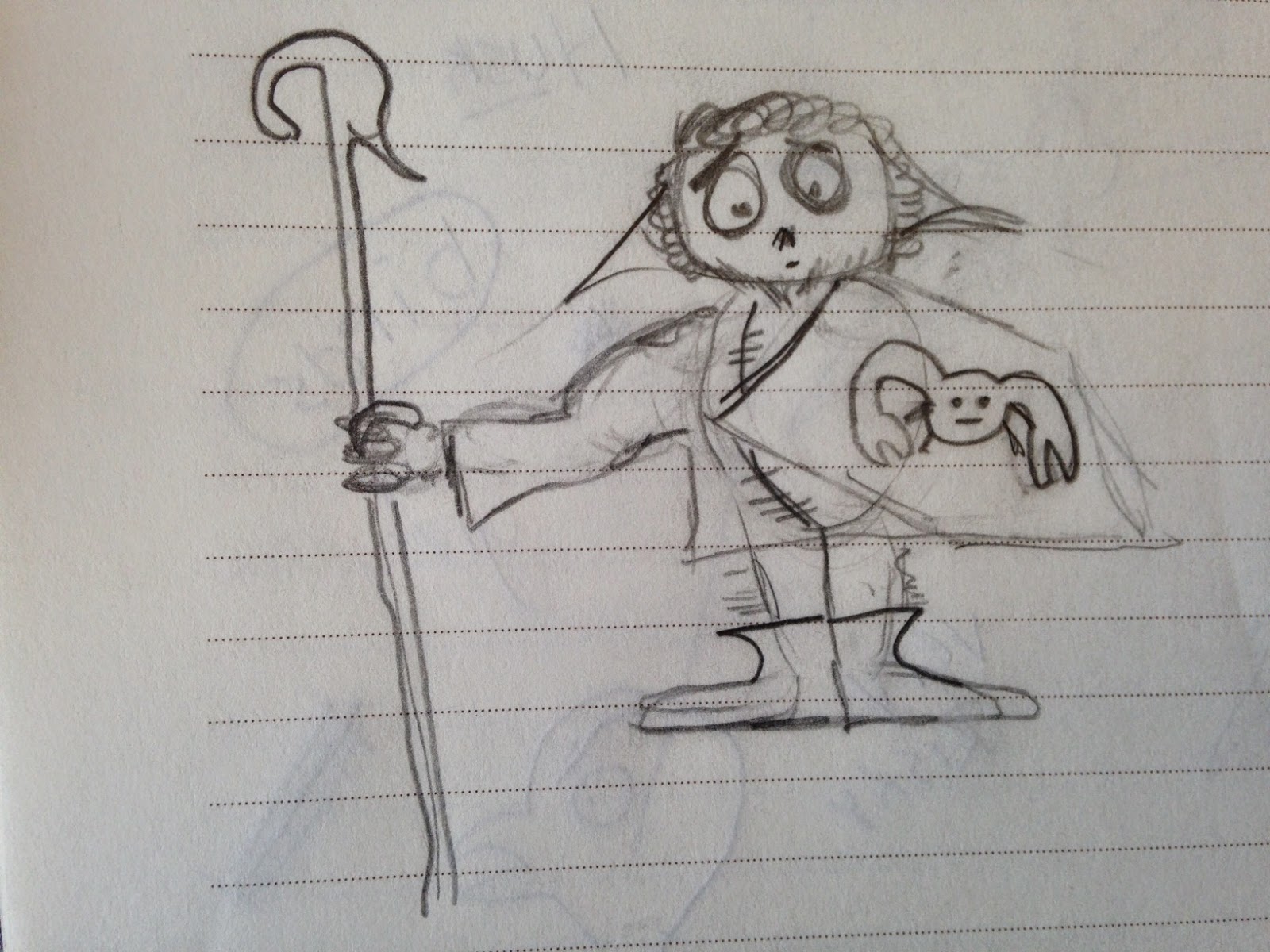 The Inkami are a nocturnal species that inhabits the islands of Roto.  Cute, fuzzy, and seemingly harmless, the Inkami can be anything but.  Although they have developed great intelligence over the years, they have done so all the while existing as a prey-species.  There are dozens of creatures on Roto that enjoy the taste of Inkami flesh, from giant predatory sky serpents that hover through the clouds inflated by large internal gas-sacs, to the ape-like "Thaag" that rule the jungles from the tree-tops.  The greatest threat, however, could be the Last Bane, a monstrous creature hundreds of meters in height that regularly arises from the waves to come onto land and feed on everything.

But all of this danger doesn't stop the Inkami from being who they are: adventurous and swashbuckling fur balls with serious chips on their shoulders.  In the campaign setting of Aether's Light Inkami often serve as scouts, messengers, and spies for both the Agreoni and the Lunarians.  An Inkami right of passage is to slay a sky serpent alone, and once they are considered an "adult" amongst their people sometimes they leave their earthen homes and stowaway aboard the spacecraft of merchants and surveyors.  When asked to get off the ship, the typical Inkami stowaway can prove to the captain or commander of the ship that they are worth keeping aboard.  Besides, they don't eat much!

Using the Savage Worlds rules Inkami are Small beings that have to live in a world where just about everything can stomp them out of existence.  They begin play with a d6 in Stealth due to the nature of their upbringing, but are absolutely fearless and have a starting Spirit of d6 as well.  Sleeping during the day and living their lives at night an Inkami has excellent Night Vision that helps them see in nearly absolute darkness. 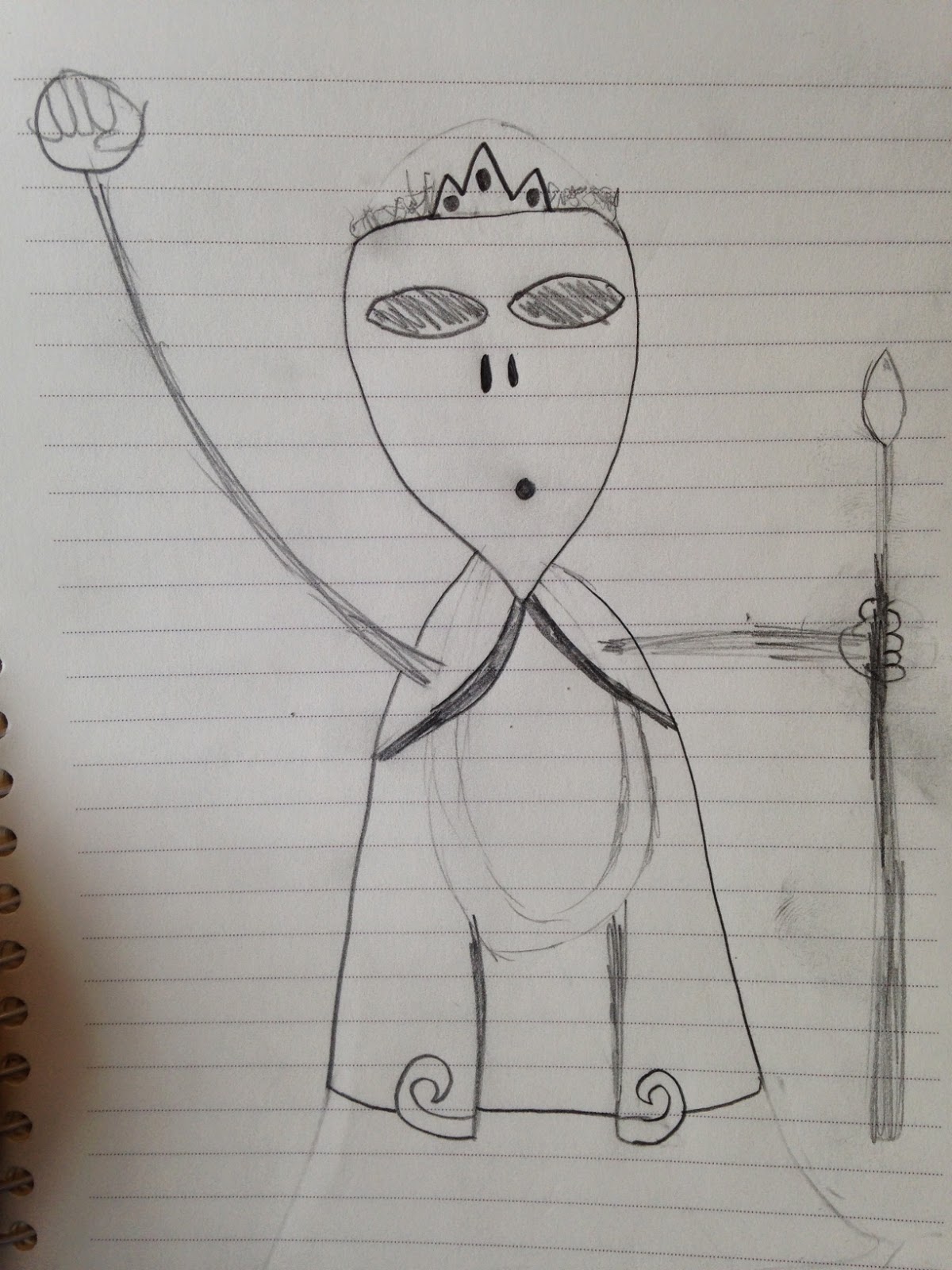 The Ghostworld of Saroosh is a sandy waste full of ruins: buildings from ages past, towers from ancient species', and roads long worn to near uselessness.  Amongst these crumbling scenes an occasional walled fortification appears, many of which are hundreds of miles apart.  The Fortress-Cities of the Ajordo, these bastions of safety and solace have a near medieval appearance and yet are full of technological marvels left behind by "The Masters", the alien entities that brought "The Servants  to Saroosh millennia ago.  The Ajordo have no name for themselves other than "The Servants."  When first encountered by human scouts linguistic software was utilized to try and bridge the language gap with the stoic people of Saroosh.  The programming was corrupted by the incomprehensible language of the creatures, and the garbled word "Majordomo" was displayed on one of the computer monitors.  The "Governor" of the Fortress-City that was first encountered saw the word, liked the placement of some of the letters, and declared to the humans that his people were to be called the "Ajordo" in the Agreoni dialect.  The name stuck.

Ajordo, at a glance, are monstrous beasts between eight and nine feet in height.  Each one is a towering behemoth, with think skin, broad chests, elephant-like skin, and an eerie glare from their huge black eyes.  Were an Ajordo to be clad in armor and given a firearm they could be an unstoppable tank in combat.  But this is not the Ajordo way, as "The Servants" are zealous pacifists.  Bred (or perhaps created) for pure service amongst "The Masters", the Ajordo were very rarely called to arms despite the obvious advantages that they possess.  Ajordo do not often leave Saroosh, but when they do they easily find work amongst all the peoples of the Aether System.  One can find Ajordo medics tending the wounded on a battlefield of Agreon, hauling materials on a star base in orbit around The Husk, or simply shoveling snowy paths from building to building on frozen Lune.

Ajordo are massive creatures, and receive a +1 to their Size as well as a starting Strength of d6.  Environmental hazards are also less of a threat to the Ajordo constitution, and so they receive a +2 bonus whenever they are trying to resist an environmental effect.  All of this physical might comes with a very timid personality.  Ajordo receive the Pacifist (Minor) hindrance when they begin play as well as Cautious.  Never known to rush into a situation, Ajordo always take careful stock of the situation before engaging.  Finally, although the Ajordo live in great Fortress Cities full of amazing creations, most of these were actually constructed by The Masters, and the Ajordo kept to knowledge of how to recreate the science.  Therefore all Ajordo begin play with the All-Thumbs hindrance as well.

I promised magic info in the last post and am still not quite there yet.  Carrie and I still want to stick to a "good" and "bad" magic system, although I think "corrupt" and "uncorrupted" is probably better.  We could see good hearted people using dark magic, and evil spellcasters bending light magic against heroes.  The concept remains that "light" magic (fueled by Aetherite) will come from Aether and it's rings while "dark" magic, a relatively new phenomenon, will come from the Husk and it's Marrow.  We've also finished using the Racial Ability system from Savage Worlds to create all the character options for the remaining playable species, and once we have more backstory created we will post them in the same fashion that we've done with the Ajordo and the Inkami. 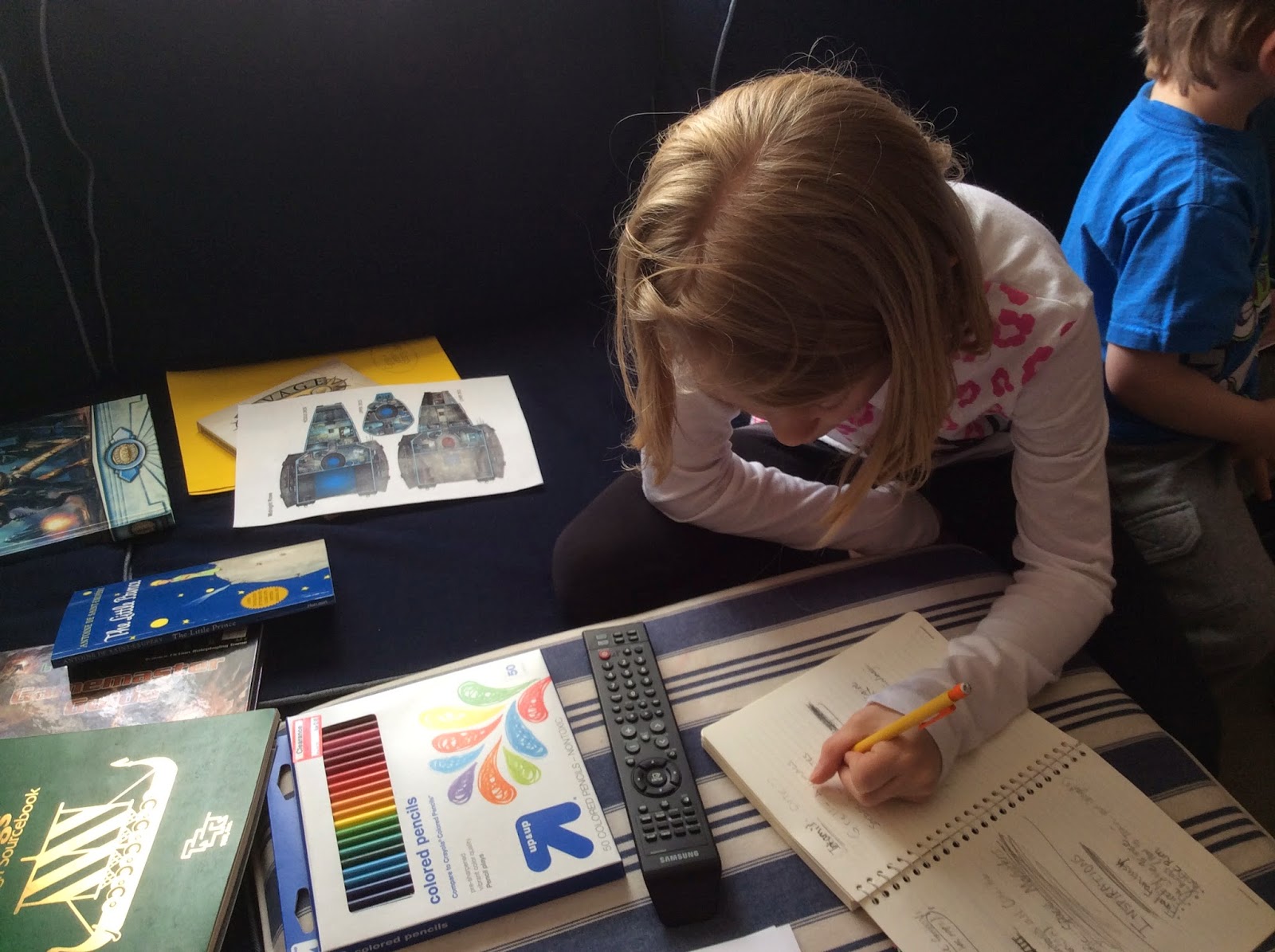 The Inkami live on a special world.  Everything on their planet is bigger than them!  Big everything!  Big monsters, big trees, etc.  The Inkami earlier on had trouble surviving.  Quite a few of them died each day because of everything being so big.  On top of all that, it was stormy every day.  There were 17 islands.  Each one had its own little kind of state.  Every little island agreed to make hidey-holes to survive.  It worked!  The Inkami survived  Now a terrifying monster has taken over: the Last Bane.  It is big, bigger than the tallest creature ever.  They tried to stop it but nothing worked.  So they hid.  And that is what they are doing to this day.

Servant #64 (S64) is an ordinary Ajordo.  He doesn't swing first, he isn't aggressive, he isn't anything like that.  Now, you would think a big tough brute would be the opposite of all that.  you wouldn't think he was a servant, you would think he is the fighter.  But no, he would probably be the healer or medic.  Now let's get into the story!

S64 is a large brute who lives on the moon of Saroosh, which is a land full of ghosts.  The ghosts destroy any villages that are created and turn them into ruins like the rest of the world.  The Ajordo now only have one fortress that they all must live in.  So they each have ta little hut.  Everyday S64 goes out and protects the walls of the fortress.  S64 one day while he was guarding saw a ghost.  It was a certain type of ghost though.  The ghost grabbed S64 and took him to their ghost base.  The ghosts studied him, they were trying to find a weakness!  S64 was not okay with this.  He came up with a plan.  He did nothing for a long while and then acted.  He jumped up and told those ghosts who was boss!  He whipped them and smacked them good.  S64 took the solutions to the Ajordo weaknesses and ripped them to shreds, letting the wind take them away.  S64 then went back to the fortress and kept guarding.