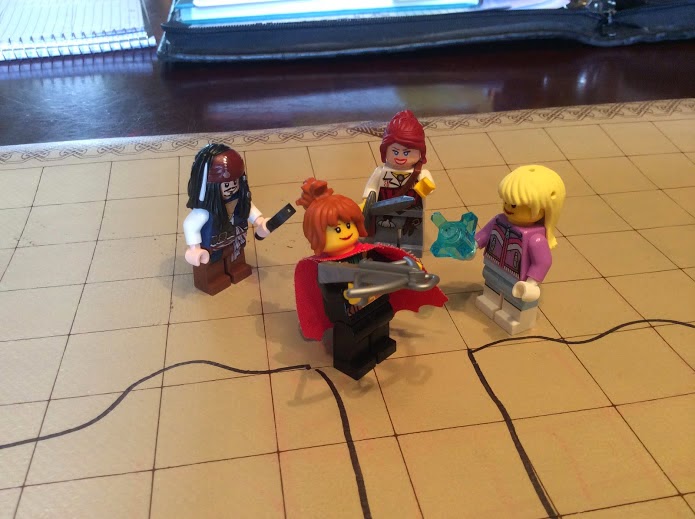 A billion years beyond "once upon a time" Elsa, Anna, and Merida dock their dagger-craft, the Silver Comet, just off the western coast of Ancuan so that they could explore the secret oasis-temple of Jruve.  An oracle of great renown, Jruve was long sought after by Commodore Jek Sperro, who the Three Princesses of Nihliesh had escorted for the last several weeks on their perilous journey.  It had all come down to this last series of tests for the princesses and their piratical charge. They had faced troupes of guards, pirates, the kinkrak, and a crockosharktapus all to get to this one location.  The entranceway to the temple seemed simple enough, an opening in the side of a hill, just off of the shoreline of Ancuan.  There were four large blue pillars that were aligned in front of the entrance, each portraying strange carvings of unknown animals and abhumans.  But all of this meant nothing to the Three Princesses, who really just wanted to get this quest over and done with so that they could go back to snow-loper riding across the Cold Desert of Matheunis.

Elsa was the first to enter the temple, taking the long path illuminated by her glow globe.  At the end was a ledge, and after that a twenty foot drop to a murky pool of water below.  The pool was about fifty feet by fifty feet, with another ledge on the opposite side of the princesses.  Merida moved forward and thought up the idea of tying an arrow to some rope.  She then shot the arrow into the base of the other ledge, creating a tightrope.  Figuring that she had the best balance, Elsa the graceful nano started to carefully tiptoe across the tightrope, carefully placing each step on the rope.  But before she could get to the half-way point, the tightrope snapped, unable to support her weight.  Elsa crashed into the water, and before Merida could jump in after her a whole school of dabirri, jellyfish with humanoid sized hearts implanted within them, appeared and began to encircle the nano. 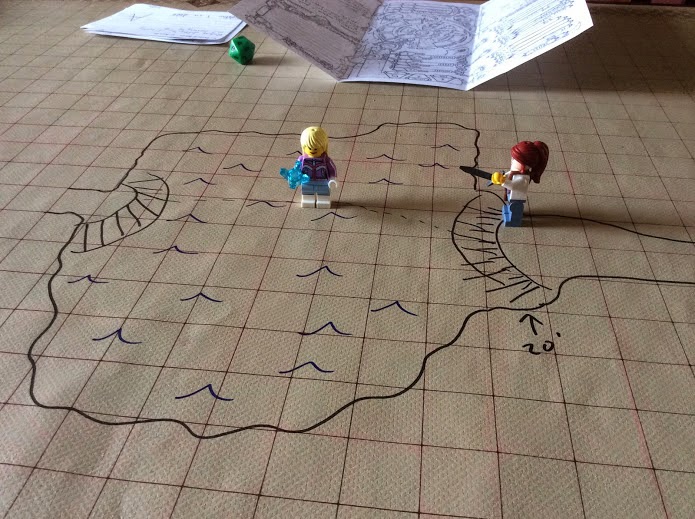 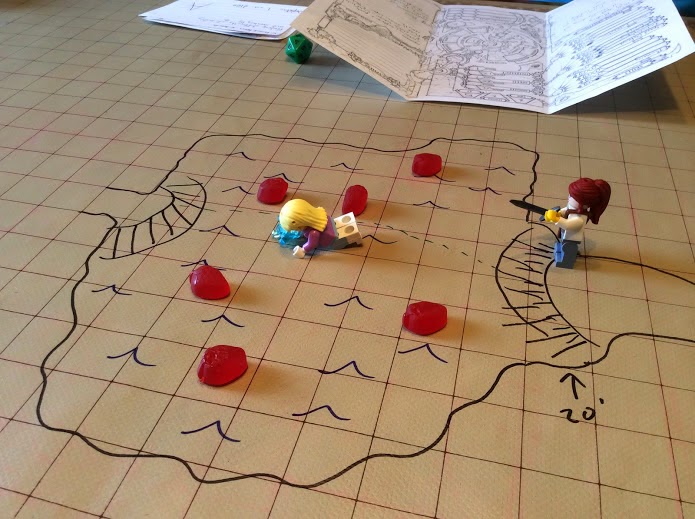 … but ended up not making friends with a school of dabirri!

The dabirri lashed at Elsa with their crippling tentacles, and the nano desperately tried to utilize her powers of ice to defend herself.  Merida, figuring herself a skilled swimmer, jumped into the pool with mace in hand.  But her presence sent the dabirri into a feeding frenzy, and soon they started acting as one.  Their poisonous tentacles jolted both Merida and Elsa with horrific pain, impairing both of them instantly.  Anna realized that her two fellow princesses were in extreme danger, so she ran to the ledge crossbow in hand and threw Merida her anti-venom cypher while blasting away with her weapon.  Merida used the cypher on herself, and then started smashing the dabirri into pulpy, squishy splotches on the water.  Once Merida and Anna had dealt with the remaining dabirri, the rugged glaive climbed out of the water, and helped Elsa to the top of the ledge opposite the entrance.  Anna soon followed and quickly moved into the next chamber. 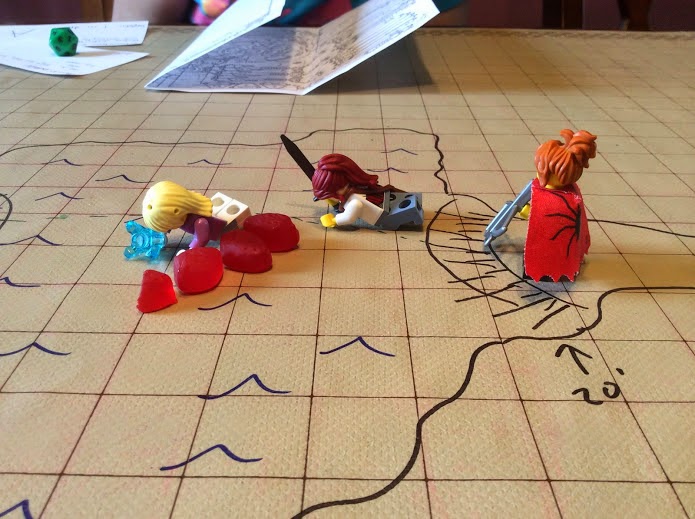 Soon both Elsa and Merida were swimming with the jellies. 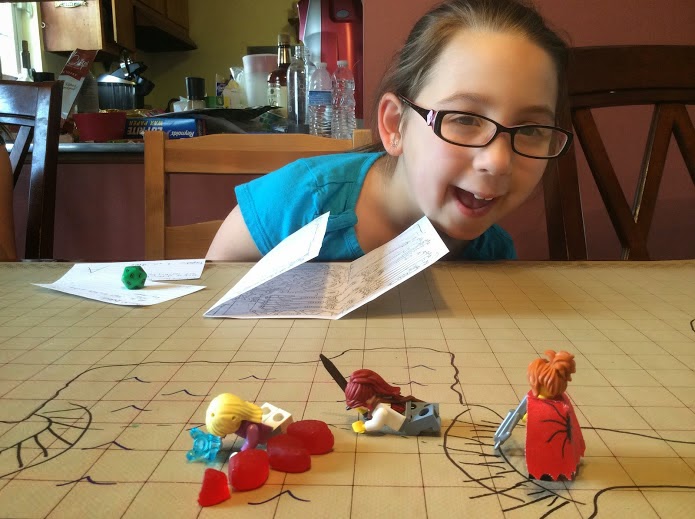 Evie thought it was rather funny that Anna stayed dry through this entire encounter.

Anna had no fear charging right into the next chamber, and was rather excited to see what all the commotion was about, since she heard quite a few talkative voices echoing throughout the darkness.  Could it be a party or other festive social gathering?  Anna loved special events, and so she was rather surprised when the mud filled chamber before her didn't seem to have anyone bounding about.  Strangely enough there were a few folks swimming in one of the muddy pools near the entrance that she had darted through, each one just sticking their head above water.  Despite having an incredible stealth-cloak, Anna made no attempts not to be seen, so when the giant Mesomeme came out of the water, the swift jack was unable to skulk away.  It was the Mesomeme that was making the noises, as all of the talking heads were attached to the creature's back by thin strands.  The creature tried to grab Anna, but she was able to tumble away and activate her cloak.  Merida had another plan for the creature.  Rather than being terrified by the disgusting heads, Merida just saw the beast for what it was… a simple animal.  And the rugged glaive had a way with calming simple animals.  Merida walked forward, extended her arms, and carefully engaged the creature.  The beast submitted to the glaive, and even allowed her to climb upon its back.  Merida now had a trusty steed! 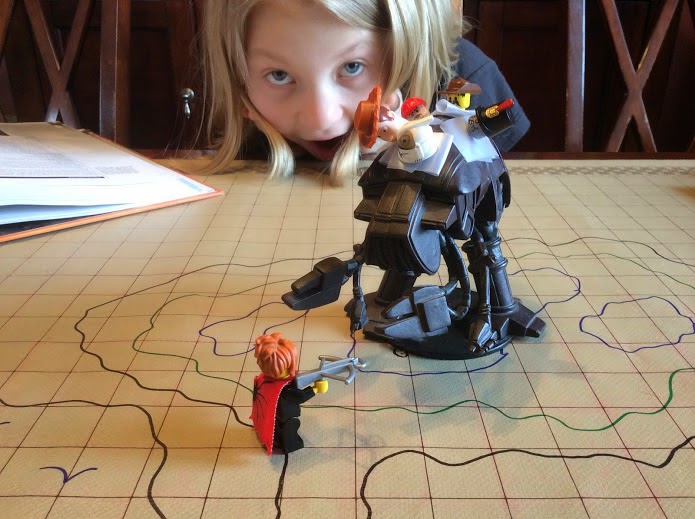 The Mesomeme came out of the water! 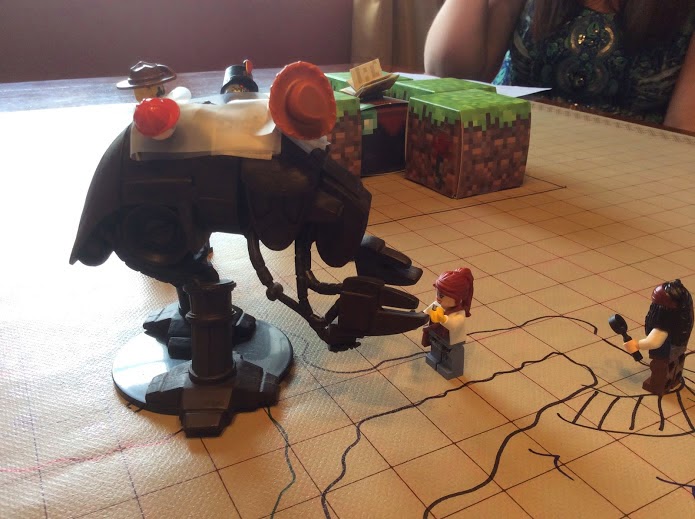 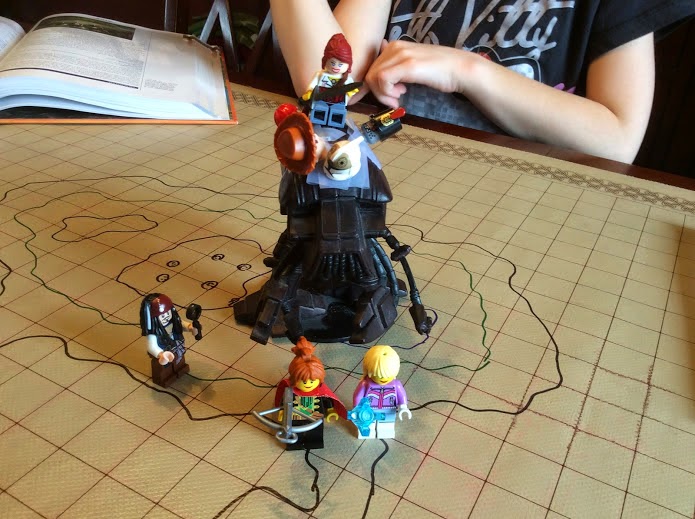 A trusty steed, ready for battle!

Anna had already received a glimpse of the room ahead when she darted away from the Mesomeme and by the time the rest of the crew arrived they all saw the same sight:  a giant snail sitting atop a raised dirt platform that held an ancient tome made of synth and steel.  Merida stayed in the previous chamber, unable to maneuver her Mesomeme mount into the room, so Elsa and Anna took Commodore Jek to see the oracle.  Jruve called upon the Commodore and the Three Princesses of Nihliesh to bring her tasty cyphers and she would tell them of their future.  Commodore Sperro did this immediately, climbed up the platform, handed over a cypher, and then listened quietly to a tale about what faced him in the future.  Wistfully the Commodore disengaged himself from the rest of the party and slid back against one of the walls in awe about what he just heard.  When the oracle offered the same thing to the Three Princesses they seemed less interested.  They didn't trust the oracle, and feared that they would somehow be disturbing their future if they heard about how it was supposed to happen.  Elsa did have her eye on the tome, however, and so she darted forward and tried to grab it.  The oracle was aghast that this was happening in her chamber, and so she spit acid all over Elsa, nearly knocking the graceful nano unconscious in agonizing pain.  Elsa ran for the exit with Jruve quickly behind her, but the giant snail was no match for the claws of the Mesomeme, who lifted the beast into the air in a tight grip. 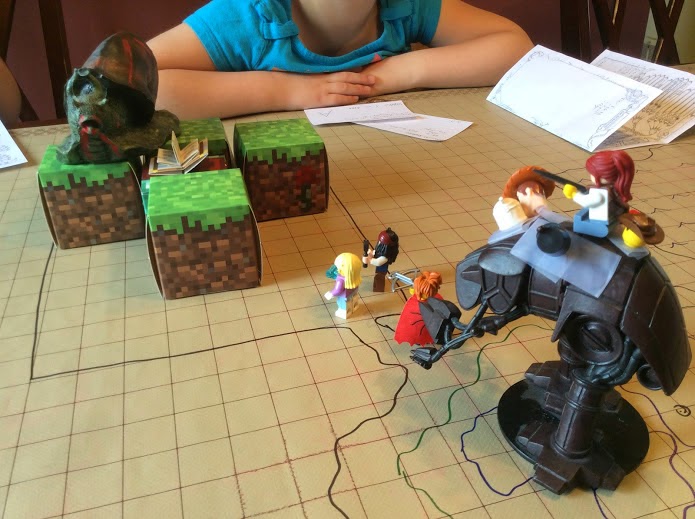 Entering the chamber of Jruve. 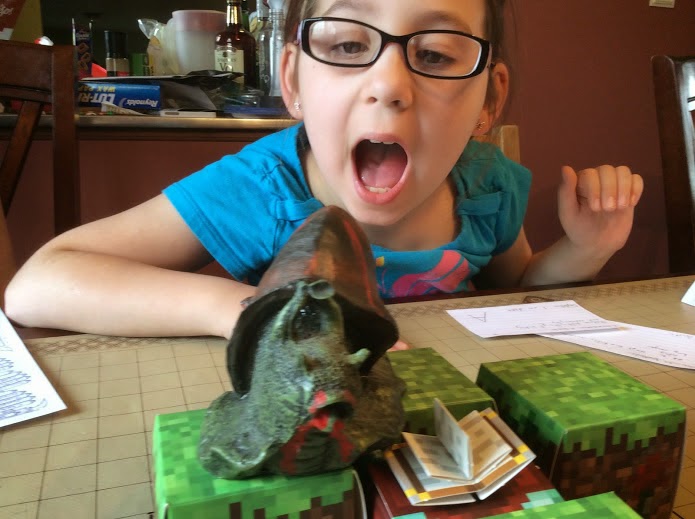 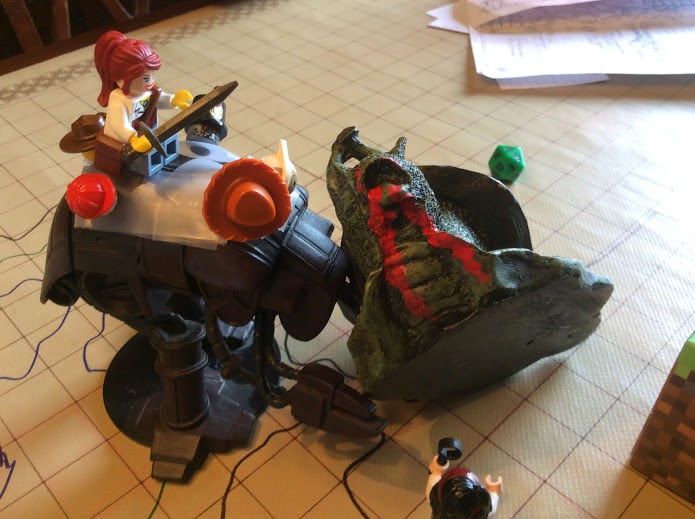 Seeing an opportunity to use her stealth and win the day, Anna quietly grabbed the tome and shuffled out of the room, sneaking beneath the Mesomeme's legs.  Merida was about to body slam the oracle when it turned its face to the giant crustacean and sprayed it with acid.  The Mesomeme howled in pain and threw Merida to the ground.  No longer an ally, the Mesomeme was done doing the rugged glaive's bidding.  This seemed a good a time as any to get the entire party out of the Temple of Jruve. 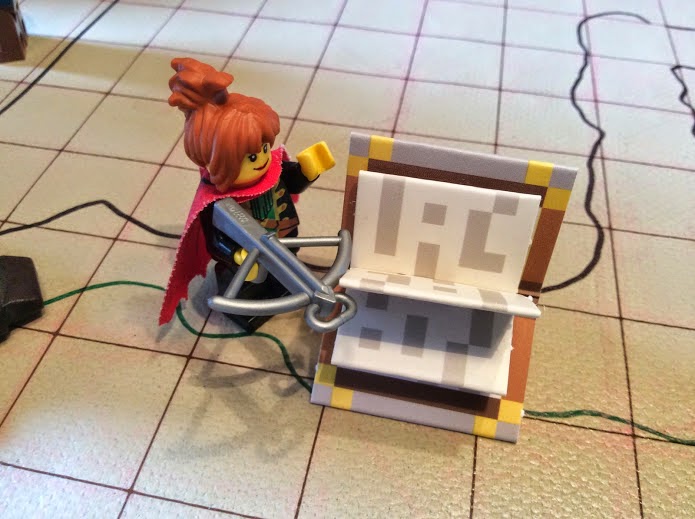 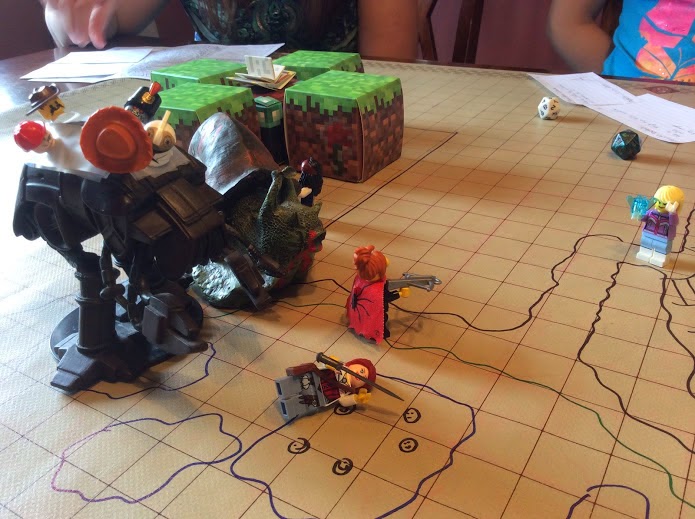 Outside the Temple of the Oracle the party quickly scampered to their ship and jumped on board.  Lucky for them, both Tonto and Milo were standing watch.  When the two shipmates asked where the Commodore was, the Princesses looked at each other.  Sperro stayed behind, they figured, still mesmerized by what Jruve had told him.  They hoped he would be okay, but wasted no time pouring over the book that Anna had stolen.  When Elsa tried to decipher the artifact, however, she quickly lost control.  The Tome of Le Future teleported the Three Princesses off the deck of the Silver Comet, and placed the smack dab in the middle of the Caecilian Forest, hundreds of miles to the northwest of Ancuan.  While they shook their heads in bewilderment, the trio was approached by a frog-like figure riding a frog-like mount.

"Hi-ho!  You must be the help that the Oracle Jruve promised me in my quest!"  His name was Kermite, and he had great plans for the Three Princesses of Nihliesh. 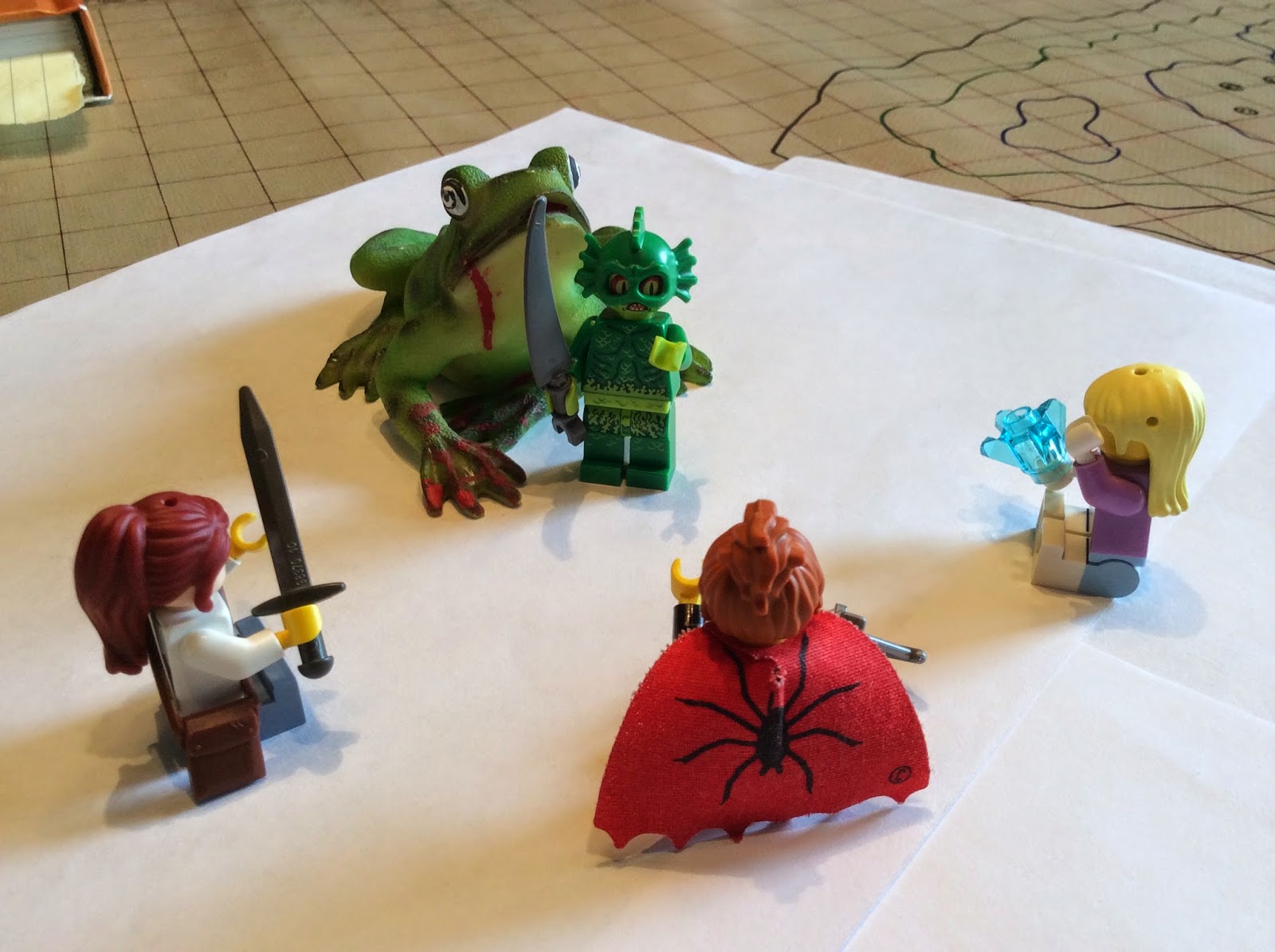 Teleported into the Caecilian Jungle, the Three Princesses were greeted by Kermite.

"What-up squishy?!?" - Merida swings her mace at one of the dabirri while wading, critically smashing it into a pile of goo.

"It's called 'loading a die!'" - Carrie's term for rolling her 20-sider until it gets a "20" and then keeping it on standby for her next roll.

Carrie:  "Is there blood on that?" (referring to the snail lawn ornament)
Jen:  "Things that aren't said in other households."

"The claaaaaaw!" - Evie's comment as Merida's Mesomeme Mount lifted the giant Jruve off of the ground with it's pinchers.