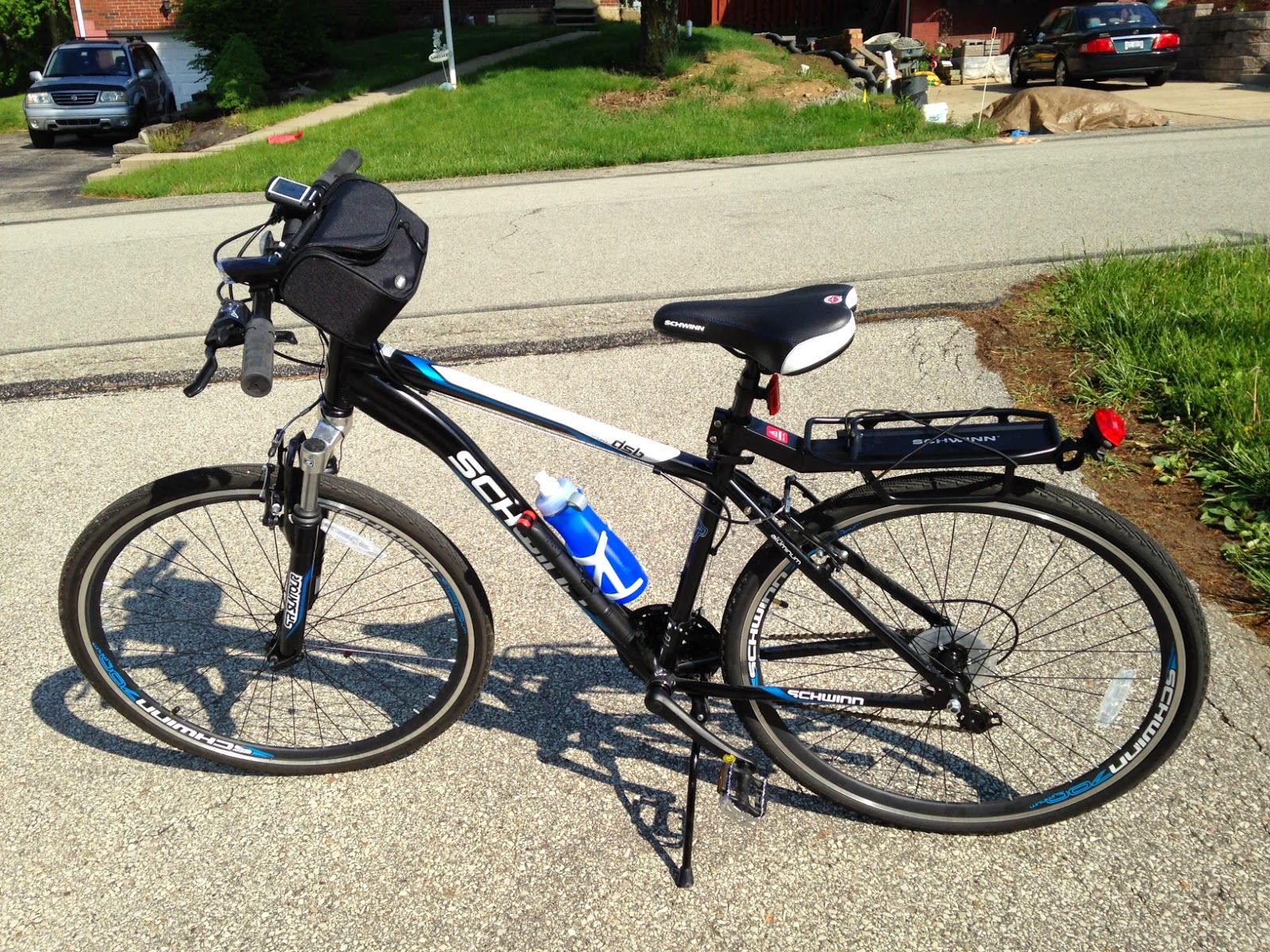 There's a whole world out there… go roll dice in it!

Get out and game.  Literally.  The summer is almost upon us, you've been cooped up all winter, and you could probably use the fresh air.  I know we are all gamers, and our choice of hobbies may seem to limit us to basements, game rooms, and living room floors, but my goal for the summer of 2014 is to do a complete turnaround on the stereotypical scene of a game-master at the head of a dining room table leading their player's through a typical dungeon crawl.  I don't need to share with you the benefits of getting outdoors and exercising.  If you have been gaming as long as I have I am sure you got your fill of the American Heart Association ads that used to be plastered all over Dungeon magazine back in the 90's.  So I'm not going to soap box about the health benefits, but instead offer you and your players the chance to create a special moment in your gaming career that you will never forget… just by a little change of venue.

When I was in middle-school in the early 1990's I spent every possible moment that I could playing Dungeons & Dragons and other role-playing games with just about anyone who would be willing to play.  Given the nature of my blog, and the cross-section of the population who would even bother reading what I write, I believe it is a fair assumption that many of you out there had similar experiences during your formative years.  I can't remember specific sessions very well, only big special events really.  For example, I can't remember all of my games during a short-lived AD&D 2nd Ed. Dragonlance campaign, but I do remember the night my mom generated a dwarven fighter/thief and decided to team up with my little brother's tinker gnome.  I've been known to run Ravenloft through all editions of D&D, but those games where we went all-out "gothic" with candles, red sheets draped over lamps, and weird incense burning in the background sure made the Domain of Dread especially terrifying.  A fan of Wendy and Richard Pini's ElfQuest comics, I've dabbled in Chaosium's ElfQuest RPG on many occasions, but I'll never forget my brother and his wolf-companion exploring the troll caves while we sipped soda and ate peanuts in the lounge car on an Amtrak train with several onlookers pondering what exactly those two crazy kids were doing.  It's incredible to experience these special moments in our gaming careers when it wasn't something in the game that made it memorable, but the context or venue in which the game was played.  As a gamemaster, I am constantly searching for new and exciting ways to express myself and my story while behind the screen.  I am certain that I am not alone in this quest. 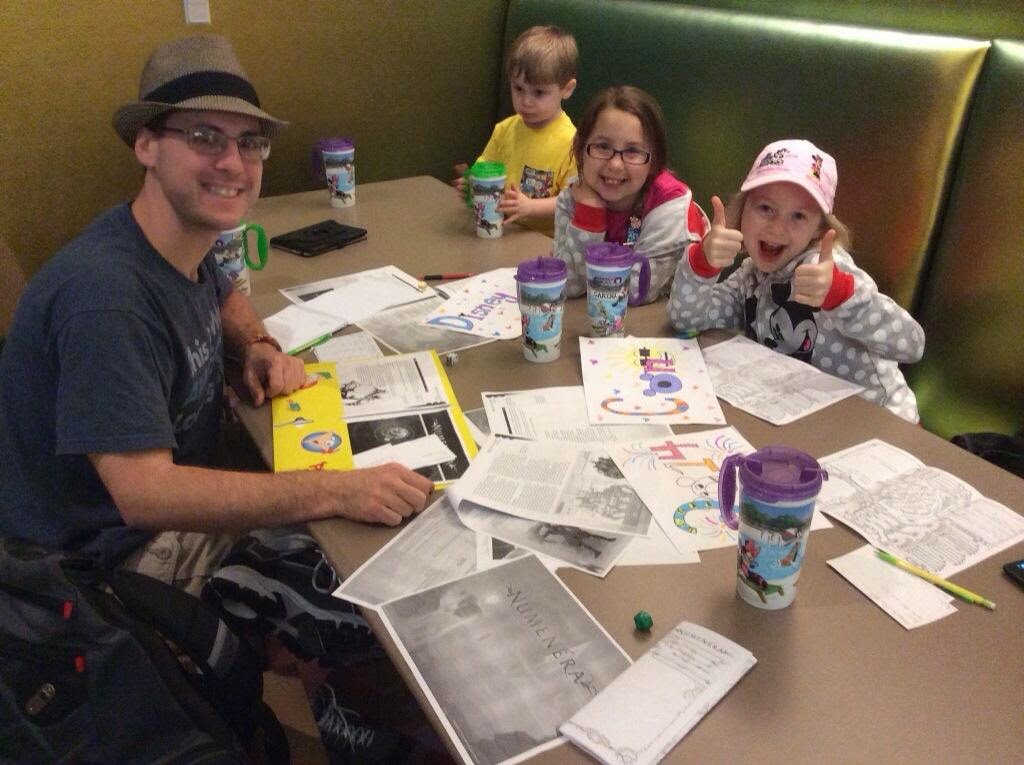 Playing in Public: My Most Recent Experiment

This past February my two daughters, wife, and mother all agreed to be part of a special experiment during our vacation to Walt Disney World in Orlando, Florida.  Using Disney-themed characters, I ran a session of my Numenera campaign in the main dining area of Disney's Art of Animation resort at 9pm while many of the dinner crowd were still enjoying their meals.  This being a casual cafeteria type dining experience there were tables available, and we figured that as long as we were eating and drinking no one from Disney would take issue.

If you are interested, here is the play report! 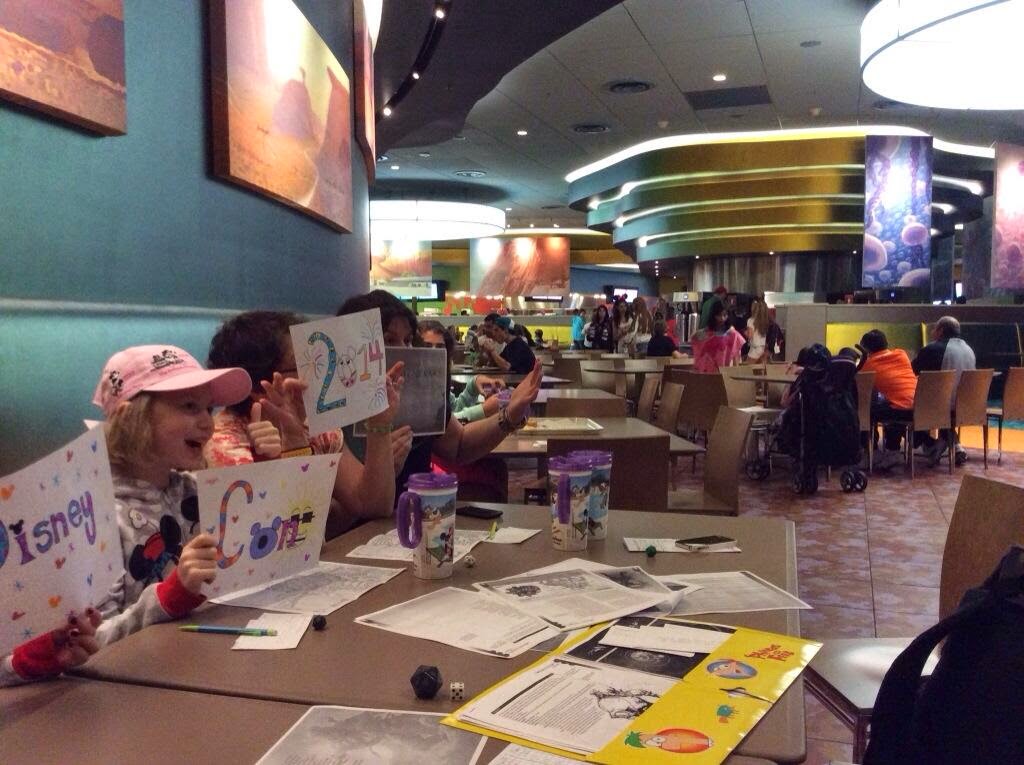 The adventure was short but action packed, and we even had a few onlookers interested in what we were doing, although no one approached us directly.  I was incredibly nervous at first and felt very much on the spot.  I've run games in public before, both at conventions and during community gaming events, but that was in front of other gamer-geeks, not the general civilian population!  We had a great time, and I hope that when my two daughters look back on their own personal gaming careers they never forget the (first) time their dad rolled dice with them at Disney World.

So I started off this conversation with a picture of a bike, and I have certainly taken the long way to get to the point of this blog-post.  I want to have more "adventures" while I am adventuring with my family and friends, so I have decided to take my game on the road wherever possible.  For me, my family, and any of my friends who are willing to step outside of their comfort zones a bit, my challenge is to spend a significant portion of the summer of 2014 not only gaming in public, but also doing it outdoors.  Playing pen and paper role-playing games is awesome - this is a well known fact.  Well hiking and biking are also fantastic, so let's combine them!  Heck, I haven't camped in well over a decade, but I bet playing a horror-filled scenario around a campfire would create a special moment that you would never get at your mom's kitchen table.

My plan is simple.  This Memorial Day weekend I'm going to grab my oldest daughter, a few friends, my Numenera books and set out for a local park for some bike-riding, a picnic, and then an awesome gaming session.  We might get rained out, we might get bit up by mosquitos, but it will be a special moment that we will always remember.  If it's awesome, we're going to do it again, and again, through the entire summer and fall.  And I think it would be especially amazing if some of you all came with us, both literally and "in spirit!"  I didn't see anyone else using the hash tag #GetOutAndGame, so let's claim it for nerd-kind and get some pictures posted!  Hike through the forest and end your day with s'mores and Planescape!  Do a 20km cycling trek and wrap up with a coffee shop game of Pathfinder!

I'm off to go prep for our adventure… who's with me?