Will Crawl for a Classic Dungeon 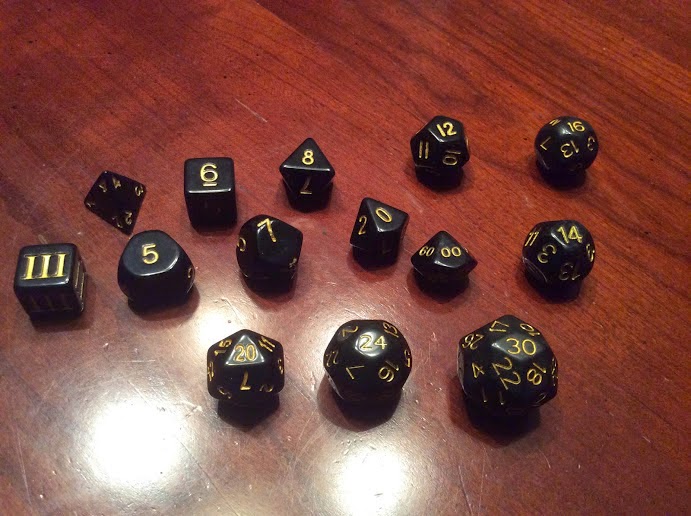 Over the last couple of years my relationship status with fantasy role-playing games could be defined as “it’s complicated.”  Two years ago my long-running D&D 4th Edition campaign, Ravenscape (Ravenloft + Planescape), came to an end.  Our close-knit group of players took down Strahd, saved Sigil the City of Doors, and defeated Orcus, but following our 30 levels and over 110 sessions, we broke up. 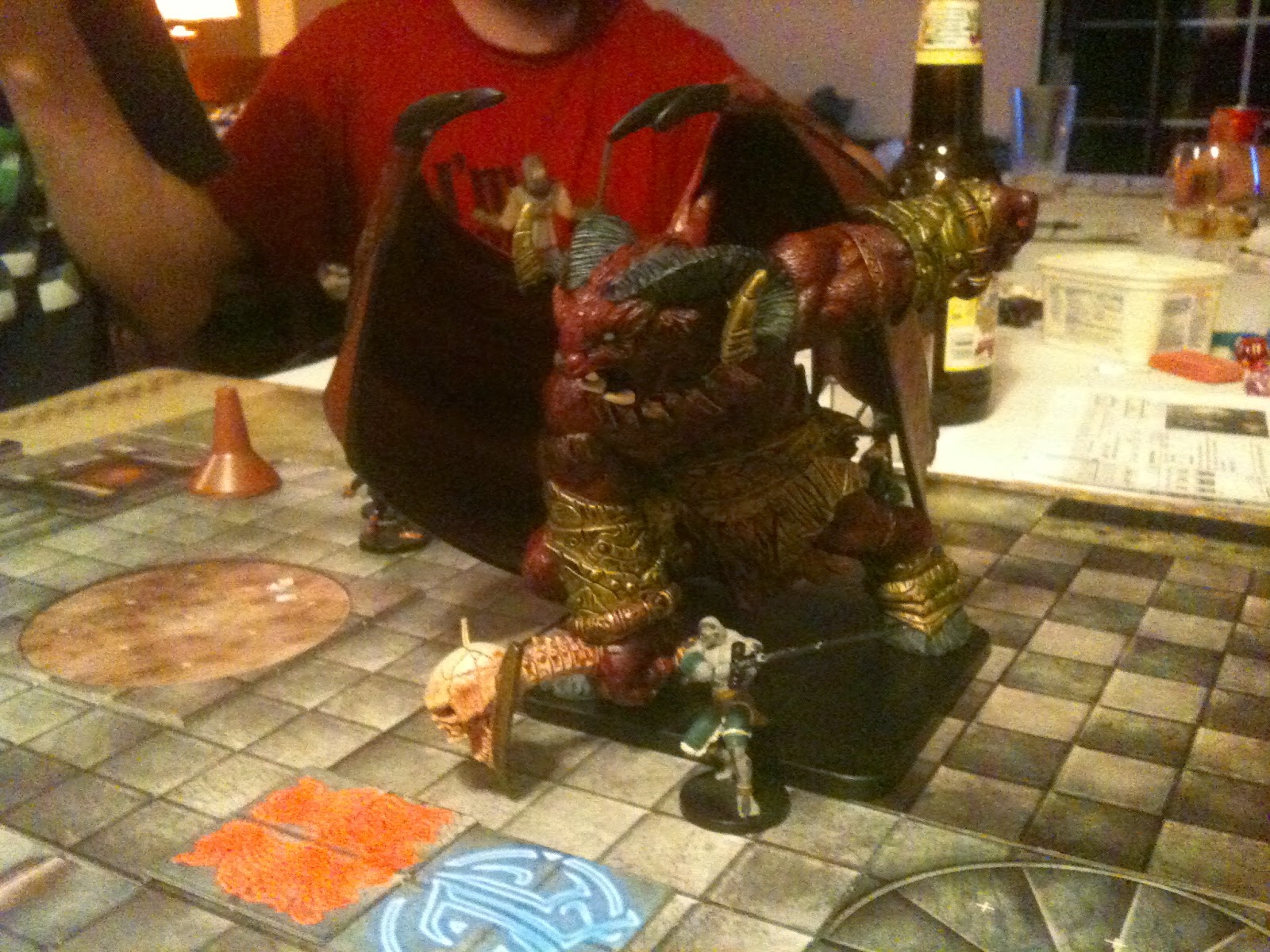 The group was burned out on 4th Edition, I was burned out from years of 3rd Edition, and although we flirted with drifting back to 2nd Edition, or possibly moving on to D&D Next, in the end the gamers of “Qualanthorus’ Keep” (that’s what we called our Yahoo Group) went into retirement.  I didn’t realize it at the time, but as a game master I was essentially retiring from Dungeons & Dragons traditional fantasy campaigning.  Sure, I came back for a few one-off games, played a few sessions in a friend’s 4th Edition game, and even tried to crawl back behind the DM’s Screen to run some more Eberron.
But the magic just wasn’t there. 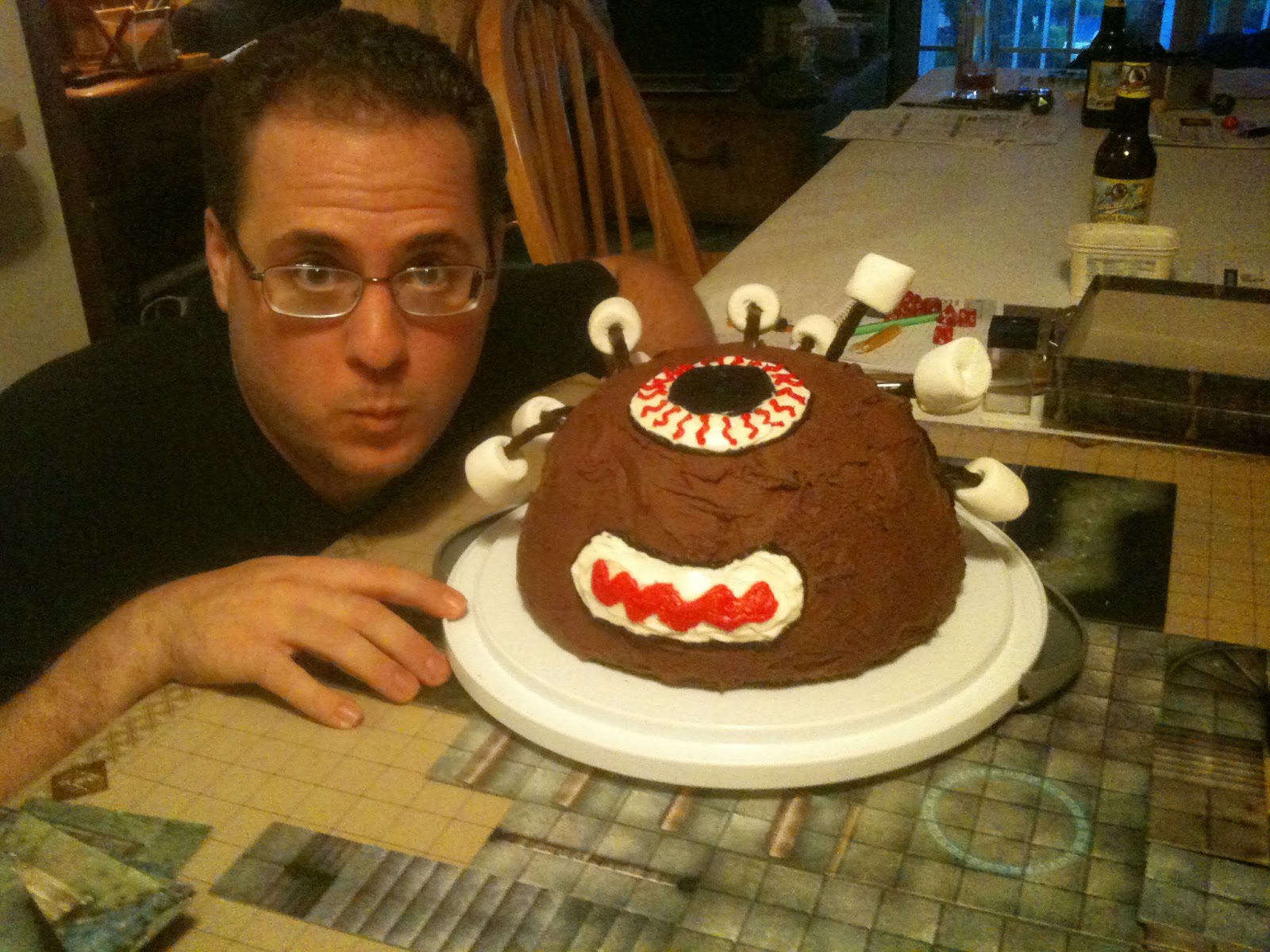 Those were the days!

So I moved on to Savage Worlds where I played a lot of Steampunk but very little fantasy.  I ran one-shots for Sundered Skies and 50 Fathoms, but nothing of note.  Last summer I discovered the terrific retro-clone Basic Fantasy RPG and started playing one-shots of that as well, showcasing the game to friends, family, and eventually the Norwin Game Knights.  Once I started our local club my gaming really took off, and I now play and game master multiple games each week.  I developed a passion for Numenera and The Strange, became more invested in Savage Worlds, and continued to pass down my love of old-school gaming to my kids (and even my mom and dad!) with a Basic Fantasy RPG Dragonlance mini-campaign.   But even though I enjoy playing Basic Fantasy RPG, I really wanted to try out a new fantasy role-playing game system.  Like many of you out there, I have an addiction for new RPG's, and I was headed to the perfect location to satisfy my thirst!

Last month at Gen Con, along with so many other gamers I got a chance to look at the new Dungeons & Dragons, 5th Edition.  The book was pretty, and the game mechanics cleaned up from 3rd and 4th Editions, but it wasn’t a game for me.  But walking amongst the other role-players, seeing the incredible displays for games like Pathfinder, Castles & Crusades, and other fantasy games got me really excited to get back behind the screen and throw a bunch of orcs and dragons at players full time.  But I couldn’t settle on a system while in Indy.
Once I was back from Gen Con I took some time to figure out what I wanted in a new fantasy game:
1)  I wanted a game with a dark, sword & sorcery feel
2)  I wanted a game that gave me a sense of nostalgia from my early years as a gamer
3)  I wanted a game that had smooth, clean mechanics but with available crunch
4)  I wanted a game with a robust and growing community
Surprisingly, when I returned from Gen Con, I found the game I was looking for… on my very own bookshelf!  A few months before Gen Con I purchased a gargantuan tome in the hopes that I could play the game in Indianapolis.  Sadly I didn’t get into any of the sessions on my wish list, so I just put the book on my shelf.  But last week my world turned upside-down as I cracked open Dungeon Crawl Classics for the first time…
… and was utterly blown away!

Everything I Wasn't Expecting

This game has everything I am looking for in a new fantasy role-playing game!   The tone is gritty, brutal, and very, very twisted.  The game mechanics are well balanced between elegant and crunchy.  Class and level design are simple and easy to understand, but it’s clear that the road to level 10 (where the game maxes out) is full of character development, often with great peril.  Most importantly, the fan-base seems quite sturdy and there are quite a few actual-plays (Role Play DNA had a great one), podcasts (Spellburn rocks!), and blogs/vlogs (thanks Venger Satanis!) supporting the system.  I started reading the enormous book last week and wrapped up last night, and it was a complete joy to devour.
I’m anxiously awaiting my first game this weekend, but even more importantly I’m looking forward to designing my own campaign setting that will be cross-compatible between Basic Fantasy RPG and Dungeon Crawl Classics.  Last night I was tossing all of my notes from this past week together, and did some rough map sketches.  I've always started my campaign design from a basic map, and then worked from there.  But I haven't written a home-brew, medieval fantasy setting in quite a while. 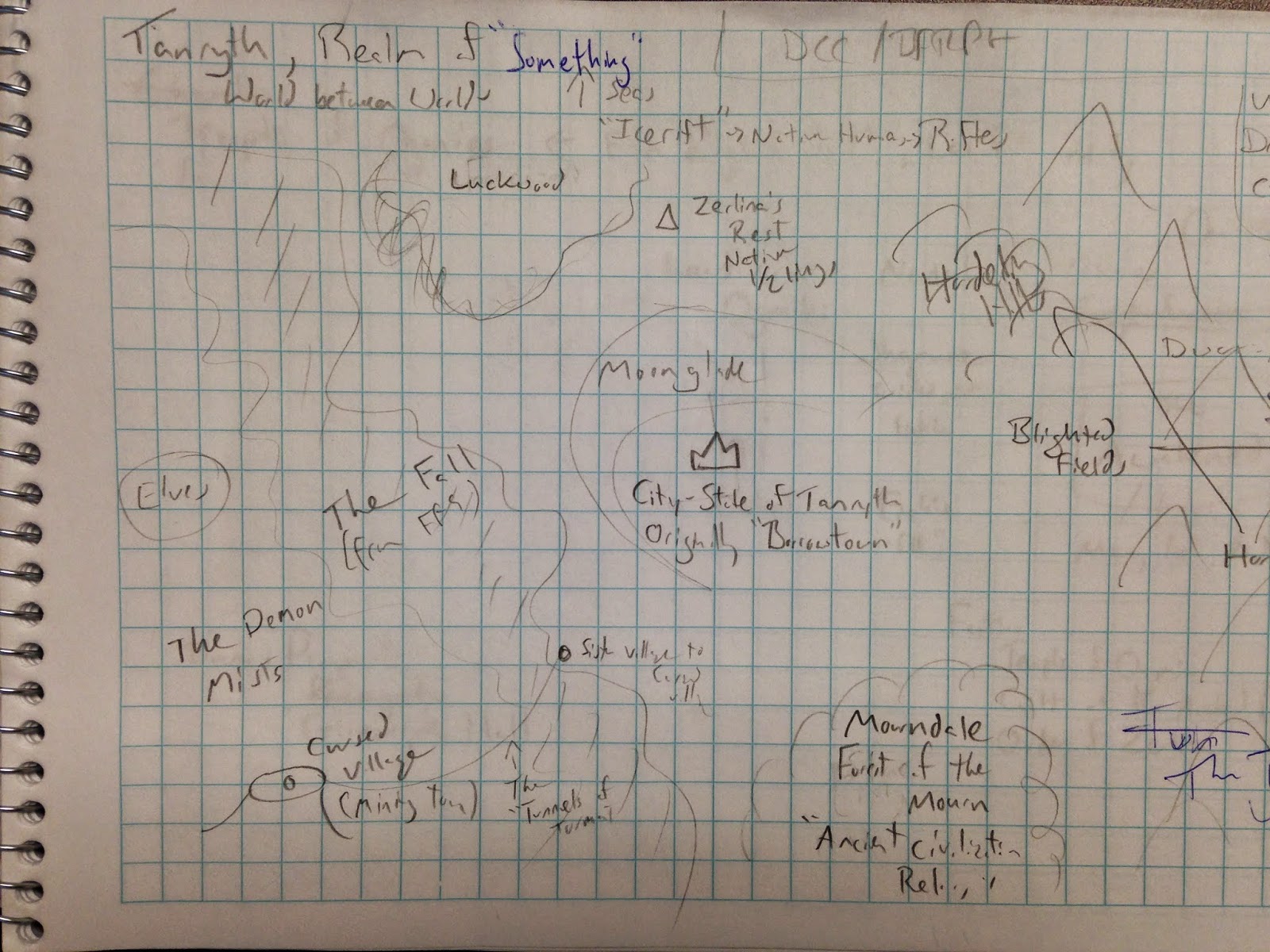 I am calling this little "seed" of a setting "Tanryth, Realm of … Something".  Okay, that's not a final name, but until I've spent more than a night or two with this fresh idea this is the campaign setting's title.  Give me a little bit of a break.  Centered around a central city-state, this Realm of Something is populated by humans who have recently come to this "World Between Worlds" from a a faraway land via a strange portal.  I'd like to emulate the themes from some of my favorite works of classical fiction: Ultima Underworld, Dragon Age, and The Legend of Zelda: A Link to the Past.  I'm pretty sure these would all count as "Appendix N" style fantasy.
Or not.  Okay, I wasn't alive in 1974, so my formative years with regards to fantasy were spent in front of either a Nintendo or a PC keyboard, so a lot of my ideas come from those countless hours.  I guess I'll need to throw in a little Robert E. Howard and H. P. Lovecraft for flavor.
So long as everything goes well this weekend during my playtest, I’ll start sharing my campaign development with everyone.