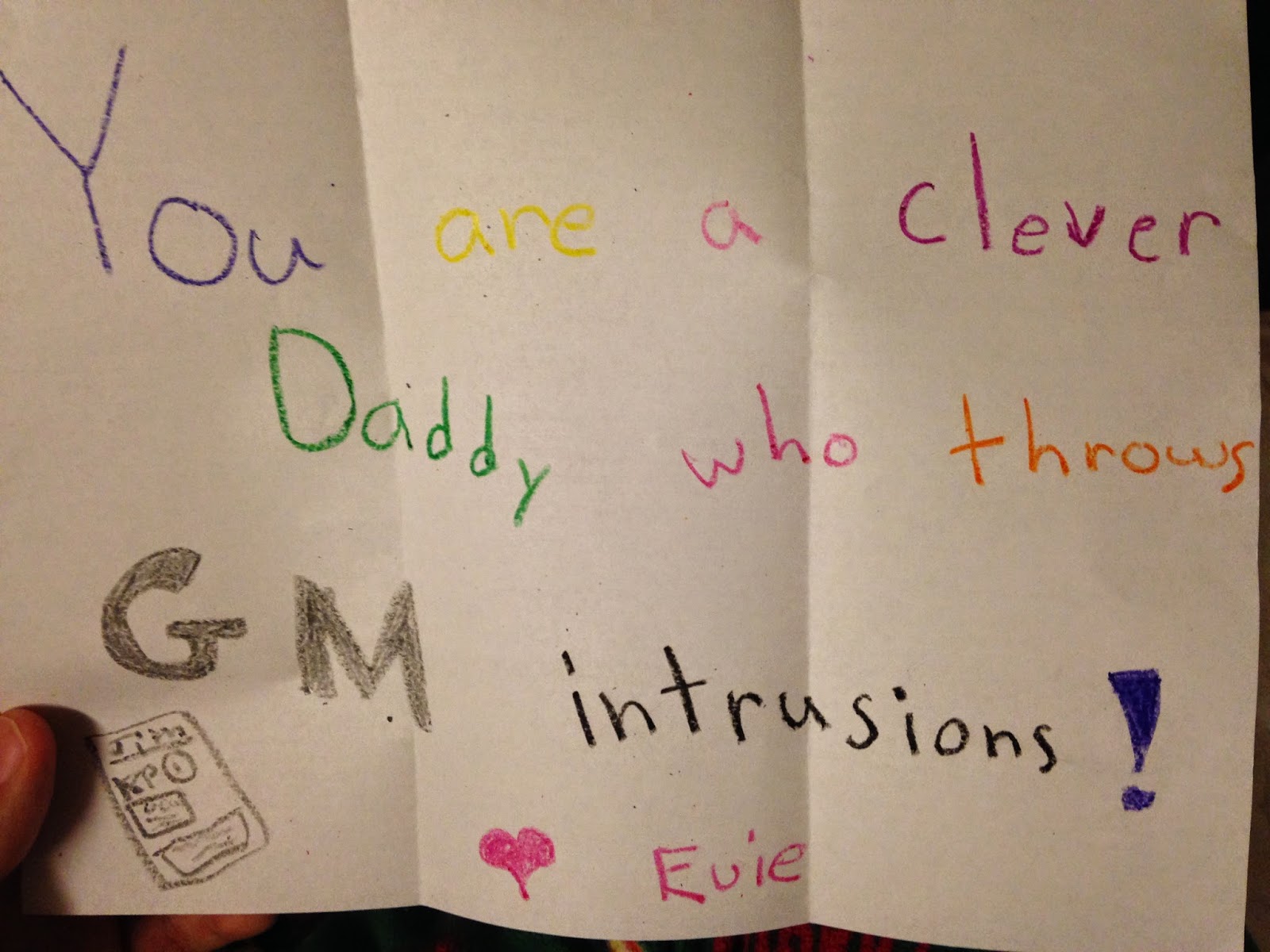 Raa-em still wanted the "gifts of the past", and the party of Unmasked Seekers was coming to the realization that the "Stonebound Monk" Raa-em was demanding cyphers and possibly artifacts in order to remain in its presence.  Raa-em was a curious entity indeed.  All of the party’s scanning and investigating led to the belief that Raa-em was a single mossy entity that covered the four remaining floating boulders in the center of the room.  It switched back and forth between "I" and "we", and was terribly impatient.
Ralyx peeked over the edge of the pit in the center of the room and saw that there were several decaying corpses in the small pool at the bottom, possibly with a few items.  The Mlox Jack took out some rope, tied it to a nearby pillar and prepared to descend into the pit. Immediately Raa-em’s thoughts entered Jak’s already battered mind.  The monk demanded to know what the Mlox was doing, and when Jak explained that Ralyx was going to go down into the pit, Raa-em forbade the action.  Jak warned Ralyx of the monk’s statements, but the Mlox was not deterred… at least not until several stones were flung at his head and back, cracking open his skull and leaving the Jack very bruised and bloodied.
Thinking that maybe he could do a better job talking with the monk than the party’s glaive (who lacked social skills), Glyquorg (who also lacked social skills) asked to communicate mentally with Raa-em. The entity departed Jak’s mind and forcefully entered the Exiled Jack’s thoughts.  Raa-em proclaimed that it was displeased by the Mlox’s actions and demanded a piece of Numenera.  When Glyquorg started to stall, and instead ask questions of the monk, Raa-em became furious.  The entity proclaimed that Glyquorg was to leave, and immediately the gravity shifted for the Exiled Jack.  The monastery was situated on the side of a sheer cliff, and while the party felt like they were standing with normal gravity, they were all actually standing on the side of the mountain…
… all but Glyquorg, who was flying towards the water barrier that made up the dome.
Luckily Ralyx saw his fellow Jack start to fly, and tossed some rope that Glyquorg caught. The Exiled Jack landed precariously on one of the pillars, balanced over a drop that would take him outside of the dome and another 500 feet towards the ground below.
Raa-em departed Glyquorg’s mind and reentered Jak’s.  Again the entity demanded the "gifts of the past."  At this point Elehar was getting impatient. The glaive was hungry, bored, and sick of Raa-em’s shit.  So he walked forward and tossed one of his cyphers onto a moss covered boulder.  The cypher at first appeared to dissolve, but upon closer investigation by Ralyx’s third eye, the entity was actually disassembling the cypher bit by bit, distributing the pieces of the device all throughout its "body".  Ralyx decided it was time for a team "pow wow", and he motioned for the party to assemble around the pillar on which Glyquorg was standing.
The team of Unmasked Seekers was stumped.  Raa-em was incredibly powerful, demanded cyphers and artifacts, had the temper of a child, and yet seemed addicted to the numenera.  Luring the entity away from the monastery would be incredibly difficult, and the bounty hunters didn’t know if they could battle the psychic mossy boulders and survive, let alone return them "alive" to Nihliesh.  During the conversation Glyquorg kept rubbing his legs, complaining that the act of standing on the pillar was becoming painful.  Crouching down, the Exiled Jack realized that the structure he was standing on was actually vibrating! Glyquorg started searching the pillar below his feet and noticed that the "stone" of the structure was more like concrete, covering a long piece of rusty steel – the same material that the team was encountering all throughout the mountain.  The top of the pillar ended a mere inches from the watery dome, and when Glyquorg passed his hand between the pillar and the dome, he felt a stronger hum and vibration.  A quick scan by Chase and the party realized that the liquid dome must be magnetized in some way, and controlled by the pillars.
Elehar was still standing near Raa-em, and found the voice of the monk entering his mind. Raa-em praised the glaive for the gift of the past, and now that the meal was finished, offered a story to Elehar.  Elehar was instructed to kneel, which he did, and Raa-em began to speak.  The story was actually more of a personal reflection on the nature of time, and how time passes more quickly for the old than it does the young.  From the lecture, Raa-em revealed that it was thousands upon thousands of years old, possibly nearing a million. Although the story did not make much sense, it left Elehar in a very serene state, and when he stood up his mind was more settled, and wits were a bit sharper.
When Ralyx heard the story from Elehar, the Mlox thought it was dumb.

He had his own story brewing, and it involved an electrical ray emitter.  Giving the rest of the party very little warning, the impulsive Mlox jammed the emitter into one of the pillars and unloaded the cypher’s energies in one terrible blast.  The electricity coursed through the pillar, destabilizing the magnetic field above. This caused the watery dome to crash, the entire party to get drenched, and Raa-em to scream in pain and terror. The stonebound monk immediately lost control of gravity and the entire party started to fall.  Ralyx was holding on to the rope he attached earlier, and Glyquorg grabbed the end of the rope before he fell below.  Chase dropped to the ground and slid as gravity shifted, but was able to plant his feet on the edge of the pit and keep from falling further. Jak safely landed on one of the pillars.  But Elehar was not so fortunate.  The glaive tumbled and slid along the wall, finally coming to a rest 500 feet below.
The team took a few minutes to get their bearings before carefully climbing back down the side of the mountain.  Chase stayed back at first, and searched the pit’s contents and dead bodies.  There were several oddities and cyphers hidden amongst the bones, and even an artifact: a skill bud that would affix to the side of the user’s head and give them skill in healing!  Eventually the team made it to the mountain’s base, just near the large metal spires, where Elehar was scratched and dinged up, but not dead!  Also, tucked in the shadows just beneath one of the boulders, was a quivering mass of moss.  Realizing that Raa-em must have had some kind of allergy or aversion to sunlight, Raylx took a small sack into which he packed the formerly stonebound monk.


Once back in Nihliesh the party went before both Gurn-Ellohesh, their fixer, and Seskana Vaeshir, matriarch of the Vaeshir family.  The Unmasked Seekers shared everything that occurred during their mission with their patrons, including details about the weird, rusted structure that was buried within the mountain.  Seskana, disgusted by Raa-em’s form,  wanted nothing more to do with the monk.  She could not get coin or currency from the entity, but also didn’t feel the need to slay a seemingly eternal piece of moss.  The matriarch gifted the life form to the party, and Chase Rombek happily took the entity as his new ward.  Once paid by Gurn-Ellohesh, each member of the party was offered a mutation, as per the laws of the Broken Mask.  These mutations were accepted by the entire team save for Chase, who opted to remain "pure."  Although he was offered an opportunity to join the Broken Mask, Ralyx declined entry, stating that he would prefer to remain on only as an independent contractor.

The party’s lattimor fixer seemed amenable to this, but remained unsure of where the strange arrangement would lead.


"I am a something something that excretes living solvent!" - Marc playing with foci.

"Inappropriate winter weather wear?  Is that like a thong?" - Jim to Mark on Ralyx's gear selection.

"I can't stop him.  He's his own three-eyed person, or cyborg, or robot, or one eyed freaky thing." - Jak explains to Raa-em that he has no power over the party's Mlox

"I'm just getting a feel for its mental state." - Andy explains his interaction with the stone bound monk.

"I think that gut slurry is the word of the night." - Marc may have been right.