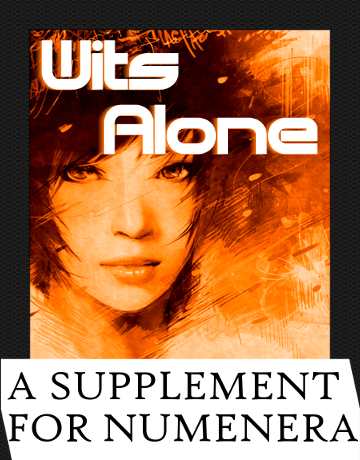 
I’ve had a fascination with “dark side” style campaigns stretching back into my AD&D 2nd Edition days.  While I never managed to get my 2E kobolds & goblins campaign up and running, in the mid-2000’s I ran a mini-campaign for the D20 Star Wars Revised Edition featuring players representing the Imperials as they hunted down rebel forces on Naboo.


By the time 4th Edition rolled around, I ran a campaign I dubbed “Thieves of Eberron”, in an attempt to merge the fantasy-noir aspects of Keith Baker’s Eberron Campaign Setting with movies like Oceans 11 and Goodfellas.  More recently I kicked off my Tales of the Broken Mask campaign for Numenera, featuring the dark and gritty underbelly of Nihliesh, and a semi-religious guild of mutant bounty hunters.


So when I got my dirty little mitts on a review copy of Ryan Chaddock Games’ Wits Alone, recently released on DriveThruRPG.com, it didn’t take long for me to start cooking up new ideas for campaigns bathed in crime, betrayal, and low-down, filthy thieves.


Wits Alone is written for the Numenera Game Master looking to introduce criminal elements into their campaigns.  The resources within this book give the GM the option to introduce anything from a light touch of a city’s seedy underworld, to a full-fledged campaign with all of the complexity of a procedural crime drama.  It truly is the GM’s choice what they want to pick and pluck from Wits Alone, and it’s all there.  For players, there are additional descriptors and foci to choose from, and many would make an excellent fit no matter what kind of game the GM is running.  For GM’s the resources are much deeper.  Examples of criminal activities and heists that can act as plot hooks.  Completely fleshed out and operational crime syndicates that can be used as either allies or villains (or both) for ongoing campaigns.  There’s even an expansive section on Uxphon, located north of the Steadfast, and new materials that flesh out all of the seedier aspects in ways that will completely change your view of the city and how it can be used in your games.


Chapter I, Deep Shadows gives the reader an overview of what exactly Wits Alone is all about, and how crime and criminal processes can be used in a GM’s campaign.  Types of criminal activities and occupations are detailed and fleshed out, to be used as plot hooks for crime-based missions, or as thematic elements for more traditional adventures.  Players will be happy to find some new Descriptors and Foci in this section, which can be used for any sort of campaign, although each would perfectly fit a crime-based game.


The new descriptors in this chapter are self-explanatory:   Dastardly, Dashing, Greedy, and Seedy.  Each seems well balanced and appropriate given the theme.  Foci include Covets Secrets, Gets Things Done, Has a Plan, Leaps from Rooftops, and Whispers to Locks.  Some of these have tier abilities and effects that could be gained or mimicked via types or existing foci, however those listed in Wits Alone truly feel at home in a shadowy campaign.  For instance, a player looking to design a criminal mastermind could easily chose Leads out of the Numenera Corebook, however the focus “Has a Plan” would turn your Jack into a regular Danny Ocean.


Both the GM and players will find the section on Syndicates incredibly useful albeit for different reasons.  For the GM, each Syndicate is thoroughly described: their history, turf, recruitment methods, connections to other criminal organizations, and notable persons of interest are all fleshed out in detail.  A savvy GM could create an entire campaign out of just one of these syndicates.  For the players, each Syndicate has a focus specially designed for that organization that fits the theme.  For instance the Midnight Market Syndicate is a back market operating in an ultra-dimensional sprawl.  The associated focus, Knows the Midnight Market, could be for a player affiliated with the syndicate, or in possession of close ties.


Chapter II, Watch Keepers flips Wits Alone on its head, and describes in great length the laws that are being broken by individual criminals and the Syndicates, and how law enforcement plays out.  Multiple angles and directions are taken, so that a GM could use law enforcement agencies as antagonists, especially when they are harsh and unyielding towards even the suspicion of minor criminal activities.  Occupations for law bringers are included, such as Criminal Investigator, Vigilante, or Numenera Forensic Specialist.


I wonder if I was the only one that thought about CSI: Navarene.


New descriptors and foci round out the chapter, and law enforcement organizations are described in the same manner as the syndicates: history, recruitment, facilities, open investigations, and law bringers (NPC’s).  Additional foci are also included, again, each organization getting an associated focus.  “Open Investigations” are particularly interesting, as they provide a plot hook that could let a party start right in the middle of an active investigation.  Since each organization has several open investigations, an interesting campaign design would be to allow the players to choose which lead to follow, giving the feeling of a true sandbox campaign.


Chapter III, Black Goods gives a brief summary of how black markets work in the Ninth World, and then details some additional artifacts and cyphers for the campaign.  There are four new artifacts and thirty-six new cyphers in total.  The cyphers are listed on cards that can be printed and then cut, to be handed to players.  Personally I’m a fan of the Earthdive Helmet, which would allow a user to “swim” through solid ground without having to come up for air.  Perfect for a prison escape scene!


Chapter IV, Uxphon gives the Game Master over a half dozen pages of setting material for the city of Uxphon, located north of the Steadfast.  Details are included for both the Ductrono Syndicate and The Black Chain, city-specific criminal organizations, as well as a list of independent criminal contacts that could be used as NPC’s for an onging campaign.

I wanted to take a moment to discuss the art that you will find in this sourcebook.  Like most gamers, it’s often the artwork in a particular book that draws me to reading deeper into its contents.  I love the eye candy of a vividly portrayed scene, or the emotions that can be wrenched by something so staggeringly simple, yet haunting.  Lucky for me that I’m not a publisher, because finding artwork for the Ninth World of Numenera must be incredibly difficult.  The art must be weird and exotic.  Flashes of fantasy and science fiction need to be present, but not obvious.


In this respect Wits Alone does not disappoint.


The live photography used for much of the book often fits the page perfectly and is very striking.  Page 8 is an amazing example: a female figure with her face masked, all but her red lips.  Who is she?  What’s behind the veil: a one-eyed psychic or two beautiful eyes that could turn your blood to ash while you stared in awe?  Although the book contains some traditional illustrations, it’s actually hard to determine sometimes where the live photo ends, and the augmentation begins.   Marvelous!


First and foremost, I’m already a fan of Ryan Chaddock Games and the products they put out… and for good reason.  These books are a great value and you get a ton of useful information that can fit most any Numenera campaign.  Up until now Celestial Wisdom was my favorite book, but I think I have a new personal fave!  Wits Alone shows a great maturity for Ryan Chaddock Games, not just in the setting material, but their understanding and experience with the Cypher System rules.  The descriptors, foci, and cyphers are very polished and well balanced.


The theme is also addressed exceptionally well.  This is a book about crime, but you can use Wits Alone whether or not the motives of the crime are good or evil… or neither.  Personally, as I’ve grown as a GM I prefer to see the world as without a good/evil axis.  There are people, and there are motives… it is where these two intersect that the concepts of good and evil appear.  Wits Alone embraces this concept, and allows players and game masters to introduce criminal elements and law enforcement to a campaign without some of the moral baggage.  Nice job!


I only have a couple of tweaks that I would've preferred to see, and both are relatively minor.  First, and this is a personal preference, I don’t like how the foci for the syndicates and organizations are spread out amongst the book.  For me, I’d prefer to have seen these all in one place, with notes listed under each faction as to which foci would make the most sense for members.  The only other issue I have is with some of the Renaissance Faire styled artwork.  Ryan Chaddock Games chose to heavily lean upon live photography for this book, and hats off for doing so.  But some of the pictures were too “medieval times” and not weird enough.  Only a handful, but even so it’s worth pointing out.


I’ve covered this entire sourcebook for Numenera, but have left out one very, very important piece of information:  it is ENTIRELY COMPATIBLE with The Strange!  Dastardly, Greedy, Seedy, these Descriptors, as well as most of the foci could easily find their way into your favorite recursions.  Want to run a campaign where the players start out as members of the Beak Mafia in Crow Hollow?  Wits Alone is perfect!  The focus Leaps from Rooftops got me thinking about Mirror’s Edge, a popular Xbox360/PC title with a parkour theme that takes place in the near future.  The focus Patrols the Streets could make for a perfect ex-beat-cop sidekick for that detective who Solves Mysteries.  Even the Syndicates could be retooled to fit some of the recursions in The Strange.