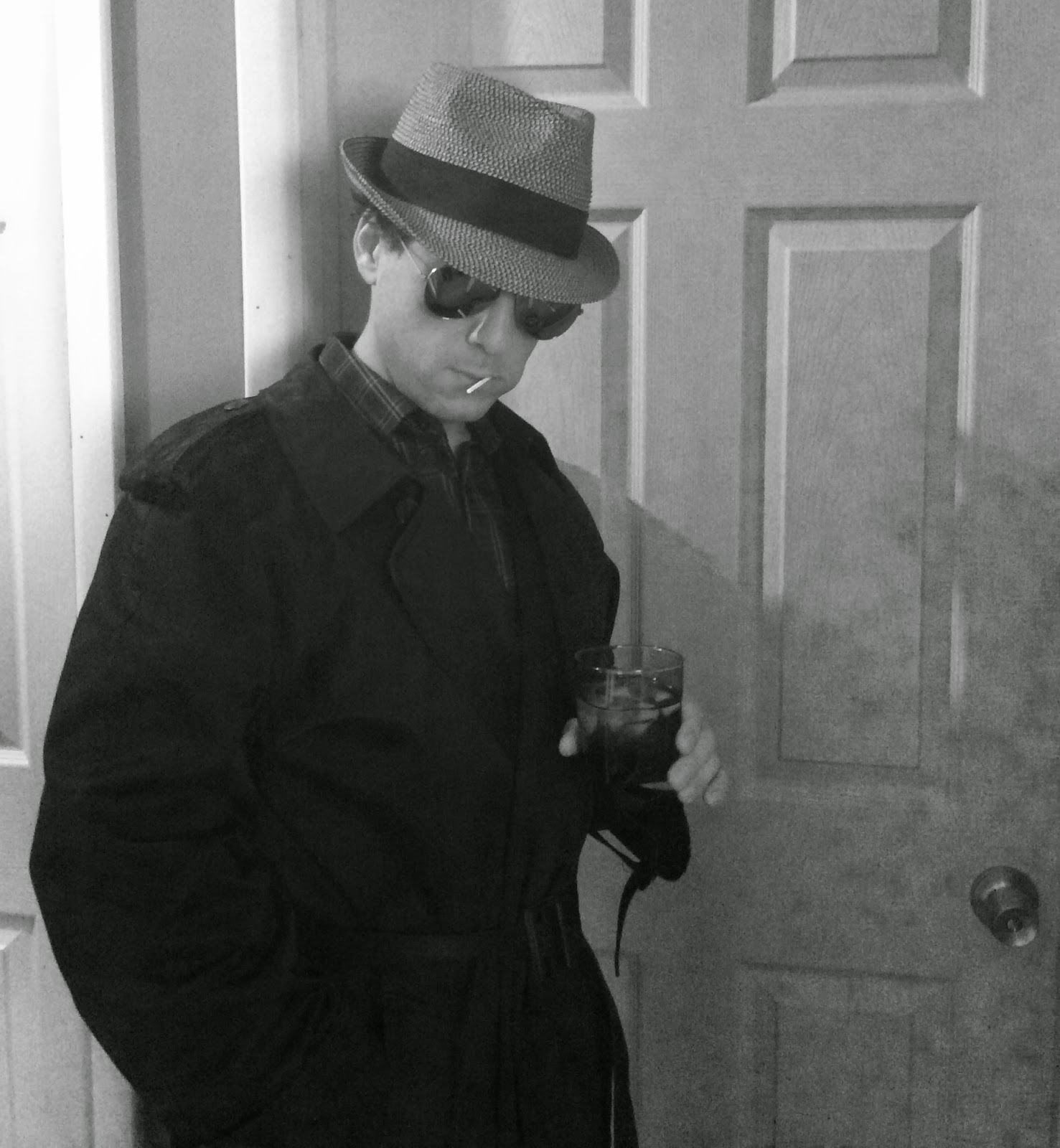 
I need to put this out there before we get started:  I don't like old movies.

As a child of the 1980's and early 90's, movies that I would consider classics are along the lines of the Terminator, the Beastmaster, and pretty much anything featuring Patrick Swayze.

Sure there are a few old flicks that I'll watch, like Patton or Spartacus, but luckily they are in color!  I guess that pretty much sums up my issues with old movies… I never really liked early black and white cinema, and it was that particular block that kept me from watching anything predating "I am Spartacus!"

So it may come as a surprise to some of you who know me that I dropped my cash on Outland Entertainment's Shotguns & Sorcery as quickly as I did.  For a game that is being promoted as "The Fantasy Noir RPG," someone who can't stand watching James Cagney or Humphrey Bogart on television couldn't possibly be interested.

Thankfully, modern cinema has been doing film noir so well in recent decades that I don't need to turn to Turner Movie Classics to catch some hard-boiled detective cracking a case, or that gangster with a heart of gold leaving the girl he loves behind.  For me, film noir (technically Neo Noir, I guess) is Mel Gibson's Porter, in Payback, hunting for his "seventy-grand."  It's Harrison Ford as Rick Deckard tearing at his own, possibly synthetic, psyche while gunning down replicants.  It's Hellboy on another job for the Bureau of Paranormal Research and Defense.

It's Marv, standing in the rain, looking for the next victim of his torturous street justice in Sin City.

I plan on bringing this feel and flavor of gritty back alleys and crooked cops to my players with Shotguns & Sorcery, and you should seriously consider joining me.

What is Shotguns & Sorcery?


I only discovered Matt Forbeck's work in the past couple of weeks, and so far have read the first short story "Goblintown Justice", so my descriptions may not be as accurate as those of you who have poured through the entire series.  A couple of years ago Matt Forbeck wrote three novels and two short stories set in the fantasy noir setting of Dragon City.  In this world, the undead infest much of the world, and only one city, ruled by the Dragon Emperor, stands as a bastion of civilization.  The technology level seems to be a blend of early 20th century, with magic being used in everyday life.  The hero in Goblintown Justice, Max Gibson, carries a wand the same way a detective has his trusty revolver, and the cabbies use magic carpets.  The rich in Dragon City live in the center, while as you move closer and closer to the edges, and the moans of zombies, civilization breaks down into slums like Goblintown.

Shotguns & Sorcery is special for another reason, as Outland Entertainment seems to be the first third party publisher to obtain a full license of Monte Cook Games' Cypher System!  If you are a regular reader of my blog, you know I'm already a raving fan of the Cypher System, so I'll spare you the lengthy lecture on why it is such an extraordinary RPG mechanic.  Monte Cook Games has released two settings for the Cypher System, including the award winning Numenera, and the recently released, hot-off-the-presses The Strange.  Both of MCG's games are cross-compatible, and share many features that can be used in either setting.  This means practically any book that comes out is a must-buy even if you prefer one setting over the other.

I believe this to be the case with most of the third-party products as well, which is why my excitement level for Shotguns & Sorcery is through the roof! 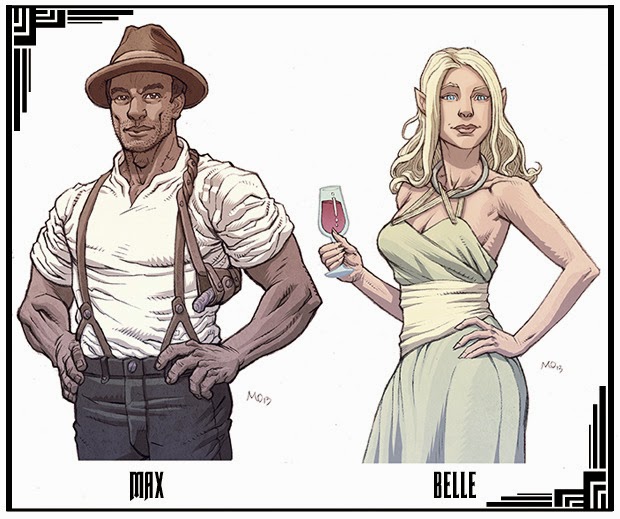 I have to give a special nod to Numenera veteran Robert Schwalb as well, as Outland Entertainment is bringing him on board to help translate Shotguns & Sorcery into the Cypher System.  If you are already familiar with Numenera, Schwalb worked on Numenera Character Options and the Technology Compendium: Sir Arthour's Guide to the Numenera.

I actually have a serious grudge against Mr. Schwalb due to his original Numenera adventure Beyond All Worlds, which was screwed up beyond imagination and left Serbrus Ton'bur (my Doomed Glaive who Consorts with the Dead) a complete wreck of a man.  One day we will meet, Mr. Schwalb, and words will be had!

All kidding aside, with all of this talent, we are in store for a real treat!

Why This Should Interest You (especially the Cypher Fans!)

I'm going to direct this part of my post towards the existing fan base of Numenera and The Strange.  Even though this game is a ways off from being released I wanted to share a few ways that I think it could be useful at your game table.  The first way is obvious… just play the game the way it is!  The campaign setting sounds amazing, and if you are looking for something "Cypher'ish" that doesn't involve the Dark Energy Network or bits of technology a billion years from now, this could be a great way to change things up at your table!

I'm sure Dragon City would make for an awesome, and very different recursion in The Strange.  Although we already have some magical recursions in The Strange, Dragon City feels nothing like Ardeyn.  I could see agents of the Estate having to deal with the elves of the Dragon Guard, and take part in magic carpet chases when their suspect gets away.

If Numenera is more your fancy you could always try something a bit more… weird.

In the Numenera Bestiary there is this great robotic/monstrous "thing" called a Latos.  Instead of a head, a Latos has an entire city for a head.  The head is pretty big, but probably just a dozen feet across or so, which means the city exists in sort of a TARDIS-esque "bigger on the inside" kind of way.  So maybe your Jacks, Glaives, and Nanos find a Latos who is carrying around Dragon City on its shoulders. 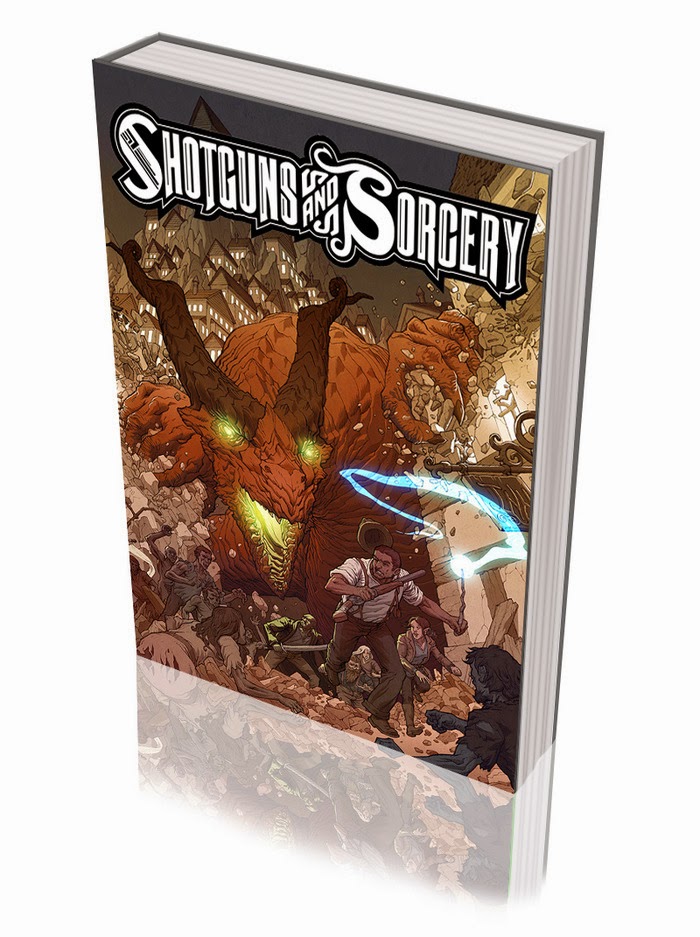 
I'm backing this project for three reasons.  First, while I hate "evil campaigns", I love crime-based adventures.  I think having a party of private investigators dealing with corrupt officials and getting double-crossed by old friends just sounds awesome!  Makes me want to re-read all of my Sin City graphic novels right now!  Second, as a fan of the Cypher System, its important to support the game system and associated projects, especially when they have so much promise and potential.  The pitch video by Matt Forbeck and Jeremy Mohler was very well done and captured my interest immediately.  I think this is going to be a fun ride.  Finally, the backer rewards are both reasonable and generous.  Just the $50 level gets you a hardback and PDF of the 300 page RPG, as well as three novels and two short-stories on PDF.

So if all of this ranting has captured your interest go check out the Kickstarter.  If you'd like to get an idea of what the setting is like, the first short-story, Goblintown Justice is absolutely free to everyone, backer or pre-backer!  If you decide to double-down and become a backer like me, make sure to spread the word!  That's when we as fans get to support the products and projects that WE want!

Hope to see you on the streets!

*** Please note that all of the artwork in this blog post is courtesy of Outland Entertainment… although the photo of that amazingly attractive detective is me.
Posted by Living 4 Crits at 2:46 PM