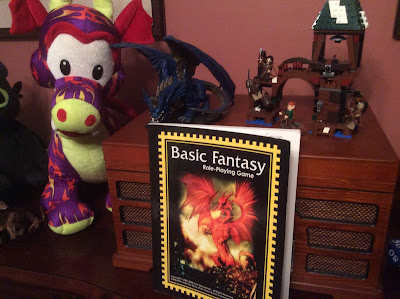 Back to Basic... Fantasy RPG

Last night my eleven year old daughter ran us through Gold in the Hills, a Basic Fantasy RPG adventure by Ray Allen featured in Adventure Anthology 1.  If you missed the video you can catch it here:

We thought that it would be fun to share our character builds with you, just in case you'd like to play the exact same adventure, with our characters.  We followed the rules for character creation... mostly:

Here's what we came up with:

As one final note, in our video Carrie referred to a new creature: the Steel Fisted Goblins!  After the game we reviewed the two minor changes to these terrible creature she generated on the fly:

I still don't know why these beasties were carrying around daggers...