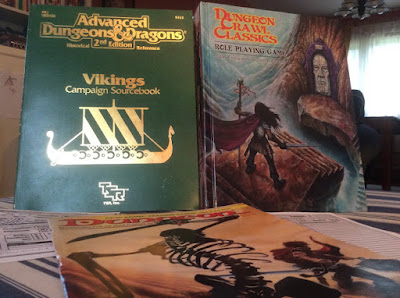 
If you missed my first post featuring Dungeon Crawl Classics RPG, TSR's Vikings Campaign Sourcebook, and this very adventure, it may be best to read it first.

Last night's game almost didn't happen, but I'm so glad that it did.  We were short one player, Andy, who had car trouble, and three were running late.  But it work doug.  Although we wouldn't have enough time to finish my on-the-fly hack of Randy Maxwell's Isle of the Abbey (from Dungeon Magazine Issue #34), at least we could run through my favorite scene.

One of my favorite movie is Inglourious Basterds, a World War 2 revenge flick by Quentin Tarantino.  When I read through Isle of the Abbey recently I realized that the scene where the party had to enter the depths of the ruin would bring about all the worst parts of "fightin' in a basement."  With the guards and soldiers of the Abbey ready for the raiders, and the Vikings lacking any other way into the subterranean ruin, this first battle of the night could play out like an ugly Mexican standoff. 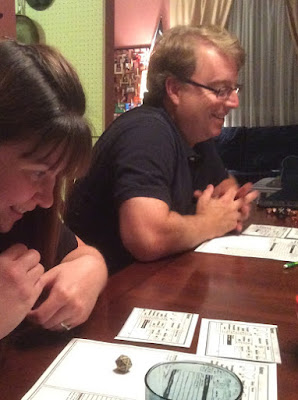 Hildenoore the Wizard, played by Jennifer

Rolo the Cleric, played by Craig

Frelger the Thief, played by Andy [Who was absent, so tonight played by Ed]

Brienne the Warrior, played by Cheryl

Calder the Warrior, played by Ed 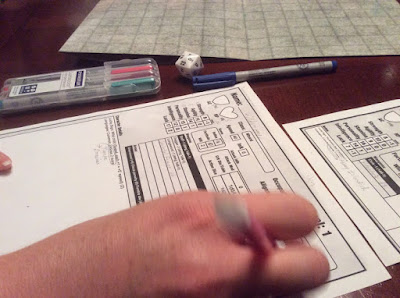 Isle of the Abbey, Part Two

Clearly someone, or something, was living in the ruined basement of the shattered monastery.  From the top of the stone staircase Frelger could make out at least two burning sconces on the wall, lighting up a great open chamber.  Moving silently and with extreme caution, the viking thief carefully descended the staircase.  At the bottom, Frelger saw eight heavily armed humans ready for battle.  Four of the humans wore holy symbols of an unknown deity, and three were guards with javelins and short swords.  At the edge of the room a tall, powerful warrior clutching a longsword whispered to his men.

"They're coming, be ready," he muttered.

Frelger returned the viking raiders and spoke of what he saw.  Prepared for battle the humans must have seen the raiders, either when their ship was approaching or as they fought their way through the sands.  With no other visible entrance into the basement, Brienne and her troupe had very few options:


[Yup, they went with a slightly modified option #1.]

The plan would be to push the giant spider's dead body down the staircase as a "distraction", and then draw swords, and run screaming down the stairs.

[There was a little more discussion at this point of whether or not the spider needed to be on fire.  Seriously, the players spent no less than five minutes on a "benefit-analysis" of a flaming spider corpse as a distraction.  They went with a fireless option.]

The tumbling dead monstrosity certainly confused two of the guards, who threw their javelins at the corpse.  The rest of the humans were not impressed.  Still, Calder was the first into the room, battle axe swinging and followed by a team of lightly armed attendants.  From the staircase, Rolo asked Thor for a blessing of Darkness, engulfing a full quarter of the room in shadow, and Hildenoore popped off some flaming hands.

[The Darkness spell was a great idea, taking Ogmund the Strong and one of the Clerics out of play for a couple of rounds as they stumbled their way free.]

The viking raiders were fairing well against the guards and clerics, cutting their way through their weak ranks without suffering a single loss.  But then Ogmund the Strong emerged from the darkness!  The cleric at his side attempted to "bless" him but the dark gods were not listening.  That's alright… Ogmund didn't need the gods!  He chucked a burning molotov cocktail at the steps, and missed.  Instead of setting Rolo and Hildenoore aflame, Ulf and the team's goat turned into a pair of crispy critters.

Ogmund's hot cocktails weren't his only weapons, for he also carried a longsword.  Smid  was the first to fall to Ogmund's heavy blad, but Helgu soon followed.  It would take the entire team's combined effort to take down the chainmail clad human-giant.  The final blow would come from Rolo the Cleric.  With a mighty swing, the fierce priest of Thor cut off Ogmund the Strong's head… with… with a hammer.

[I was so excited at the party's hard fought victory that I was already describing Ogmund's decapitation before Craig stopped me.  He had used a warhammer, not a sword… duh on my part.]

Once the last of the guards and clerics fell, the team of vikings spent a few minutes stripping their bodies of useful weapons and armor.  Since most of the attendants were clad in rags, using pitchforks, scissors, and human femurs as weapons, some short swords and chain mail were serious upgrades!  After outfitting themselves, the vikings began investigating the room.

There were eight doors connected to this central chamber, and one by one the party began to explore:
[I need to stop for a second and apologize to all of my readers who are old school gamers.  I'm sorry.  I'm sorry that I haven't trained my players to search for gear and treasure during a dungeon crawl.  I'm fairly certain that I'll have to put a big sign over any significant treasure going forward.  The sign will read "Treasure Here!"]

Oh… did you notice that I skipped the third chamber?]

During some of the lackluster investigating, the party came across a chamber that had once been an armory.  There were empty racks, bins, shelves, and a single armed Elf clutching a rune-covered shield.

"Death to the heathens!" screamed the Elf, as he charged Illugi with the shield.

With a single smash, the shield broke all of the attendant's ribs killing him instantly while burning the runes into his flesh.  The Elf didn't stand for too long, not with a half dozen vikings cutting away.  "Bayleaf" would've been proud of his enchanted shield, however.  When Calder picked it up it burned something wicked.  Hildenoore couldn't make out the runes, but Yrsa the Elf thought they were some kind of ancient elvish.  The Elven Chandler winced as she picked up the shield, and miraculously she didn't die!

[The Shield of the Emerald-Folk was not in the original adventure, but was something I threw in to add some DCC-feels.  Magical items in DCCRPG are supposed to be rare and powerful, but in Isle of the Abbey they are all over the place.  Bayleaf was supposed to have a magic shield +1 and Elven Boots.  Nope… not in my game.

If you want to use the Shield of the Emerald-Folk in one of your adventures, here you go:
Hope you enjoy it!]

The final room the party searched was some kind of meditation chamber.  Full of weird tapestries, and thick black velvets, there were murals and stone tablets strewn about.  A small stone table acted as an alter, and on top was a heavy iron brazier.  Rolo searched the room and pulled back the curtains, revealing an ornate hidden door to the south.  But before the party could open the portal, a voice called from the central chamber.

Ozymandias and Odium were standing at the base of the stairs.  Ozymandias was a high priest of the dark gods and Odium a demonic warlock.  Both were angry that they had to deal with a pack of raving vikings.  With an evil smile Ozymandias revealed to the raiders that they were now trapped on the island and should surrender.  The viking longship now burned on the coast.

Before the cleric could finish his monologue Yrsa charged with the Shield of the Emerald-Folk!

[That's right… there would be no negotiation!]

The shield struck a mighty blow, but Yrsa soon found herself on fire.  The warlock was a master of devil's flame, and his scorching blast turned the elven chandler into a lifeless husk in mere seconds.  Gauti moved in with a pitchfork but was also incinerated!

Even though the odds were in the seven remaining vikings' favor, these two spell casters were quite powerful [Level 3 Cleric and a Level 3 Wizard].  Strike after strike, hammer versus sword, the dark cleric and his hideous sage slowly lost the edge in battle.  The warlock  Odium would suffer a fatal "leg sweep" from Calder.  Ozymandias survived for another round, but ended up with a crushed skull from Orr the Rutabaga Farmer.

As the dark cleric died, he groaned his last words.  "Unworthy," he gasped.  "You are all unworthy of the secret treasures that lay in the bowels of this place."