The Next Great Campaign 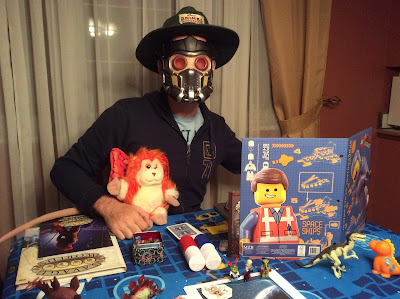 One of my favorite things to do as a game master is plan out the “next great campaign.”  My fellow game masters know exactly what I’m talking about: that mythical future gathering that will fulfill all of your gaming fantasies and more!

More often than not these incredible ideas pop up right in the middle of an existing campaign, leaving the GM with a tough choice: end the current campaign abruptly or shelve the new idea.  Typically I have to place these cool ideas on a backburner for later, as I’ve learned (the hard way) that there is no faster way to burn out players than to churn settings every three to four sessions.  Just ask my friends Craig and Frank!  Most players want stability, and to watch their characters grow and evolve over time.

Given my previous mid-campaign obsessions with “new and improved” ideas, I’ve been baffled by my reaction to recent circumstances.

In late May and early June I wrapped up two fairly long-running campaigns.  For nearly a year I ran a Numenera campaign on Google Hangouts with characters advancing as far as Tier 5.  The campaign concluded following a nightmarish romp through my Cypher System conversion of the classic Ravenloft adventure, resulting in the death of two characters.   My other regular campaign was a monthly game of The Strange with my wife Jennifer and some local friends.   Our Sherlock Holmes/Dark Sun/Star Wars mash-up ended in legendary fashion, and one of the players recently moved which puts the future a little up in the air.

… and I’m completely stumped on what to play next!

Regular readers of my blog may "call shenanigans" on that last comment, as I’m still gaming fairly regularly.  Over the last two months I’ve played Savage Worlds (Weird Wars Rome and 50 Fathoms), Dungeon Crawl Classics, and Basic Fantasy RPG, with lots of different people.  But for the most part these have been one-shots or mini-campaigns.   I will admit that Viking Crawl Classics has some staying power, so you can expect to see another session of that in the near future.

This leads me to the meat of this blog post…

What’s going to be the next great campaign?

I certainly have some terrific options to choose from. In recent months I’ve picked up some incredible games and campaign settings, from Star Wars: Edge of the Empire to East Texas University.  But there are also quite a few other games on my shelves just begging to be played, and I would feel terribly responsible if I didn’t give them some face time.

To compound the issues, I’ve got this weird brain that cooks up some outrageous mash-ups.   I’ve learned this past year that I really enjoy running games that go completely off the rails, and so that may be a theme for future games.

So enough rambling… what are my current contenders for the Next Great Campaign? Well right now there are two candidates:  Ardeyn: Land of the Curse (Cypher System) and Rimward Orion Academy (Savage Worlds) 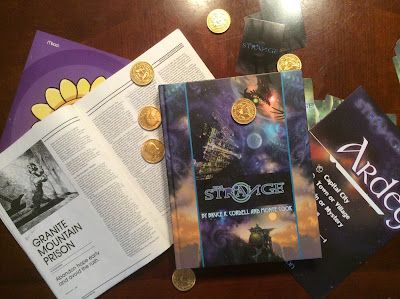 Ardeyn – Land of the Curse

For those of you who are fans of Monte Cook Games’ The Strange, Ardeyn should be very familiar.  In The Strange, Ardeyn is a recursion (think “other dimension”) based on a fictional MMORPG.  The MMO just happened to be called "Ardeyn: Land of the Curse."  Ardeyn operates according to the laws of magic, and characters traveling to that recursion experience many traditional fantasy trappings.  Interesting races, enchanted swords, dark spells, all that – and more – exists on Ardeyn. In a typical game of The Strange, players characters may travel to Ardeyn for a period of time before returning to Earth, Ruk, or another recursion.

In my proposed Ardeyn – Land of the Curse campaign, al of the action would take place within the confines of that one recursion, expanded into a full campaign setting.  To the player characters, the very concept of Earth or other recursions would be completely unknown… at least in the beginning of the campaign.  An adventure in Ardeyn would be very similar to something you’d find in other,  more traditional fantasy settings:

Daring player characters investigating ruins, taking on tyrants, and felling horrible beasts while collecting loot and lore in the pursuit of glory!

Along the way, however, hints of other “worlds” could possibly appear, along with threats, allies, and potential intrigue.

To further reinforce that Ardeyn – Land of the Curse is something different from a standard campaign in The Strange, I would use the Cypher System Rulebook for the types: Warrior, Adept, Explorer, and Speaker.  Vector, Spinner, and Paradox, the types featured in The Strange core book, are all designed to interact with multiple recursions and the dark energy network itself.  By using the new types from the CSR, the players would be rooted in Ardeyn as its own solitary world.

This is not to say that I wouldn't draw The Strange corebook and all of its supplements.  I would still need Ardeyn-themed descriptors, foci, cyphers, and artifacts for the campaign.  The newly released Worlds Numberless and Strange also has an extended chapter giving more detail to Ardeyn.  To satisfy my old school obsession I’m considering digging into some of my old Dark Sun adventures for plots and ideas, given the Sumerian/Egyptian “sword and sandal” feel I get from Ardeyn.

In addition, as the game evolved, I would bring in many of the concepts straight out of Ryan Chaddock Games' Broken Immersion.  This supplement explores all of the interesting features that should exist in a world based on an unfinished (a.k.a. "un-patched") MMORPG.

A campaign of this type would let me scratch my current "fantasy itch", while keeping me rooted in my ongoing love for the Cypher System, without having to create a new campaign setting from scratch. 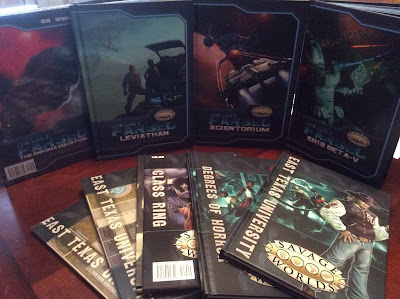 My Savage Worlds collection exploded this past June with the purchase of East Texas University and the arrival of my Kickstarter rewards from The Last Parsec. Practically overnight I received two complete collections, each begging to be played immediately.  East Texas University offers the opportunity to play as college students dealing with supernatural threats while attempting to make the grade and graduate.  The Last Parsec lets players explore bizarre alien worlds and uncover the lost secrets of ancient spacefaring civilizations. Asking to choose one setting over another is just too difficult…

… so what if I ran both at the same time?

That’s the concept behind Rimward Orion Academy.  The players would be students at a JumpCorp sponsored, space-based university trying to deal with alien threats while passing some incredibly difficult courses that require plenty of field work on hostile worlds. In space, no one can hear you scream… because you just flunked Dr. Spax’s Plutonian Renaissance course.

Players would not only have to choose their species, but also their major.  Maybe they will build a Aurax Theoretical Liberal Arts Major, or perhaps a local Construct Townie.  Adventures could come from either the ETU or Last Parsec sourcebooks.  As the player characters advance from freshman to senior, they would eventually catch the watchful eye of JumpCorp recruiters.

Adventure design would be a great hodgepodge of mashed-up awesome!  One session could feature a Deader microbial xeno-biology instructor’s most recent assignment requiring a field trip to Leviathan to gather laceraun guano.  Another could place the players at a Yeti fraternity party gone awry.  I've always wanted to go back to a sandbox style of play, and with all of this potential source material, I'd never run out of potential adventures…

… no matter what corner of the galaxy the characters have to explore during their work-study.

I think this kind of campaign could end up being upbeat, fun, and campy while still leaving room for intrigue and adventure.  I'm not sure how I would use any of the awesome plot point campaigns from ETU or The Last Parsec in Rimward Orion Academy.  But with the random adventure generators of ETU run through a science fiction wash, this could be a blast at the table session after session!

I've even figured out a mascot!  There is a certain terrible creature that infests the jungles of Leviathan… 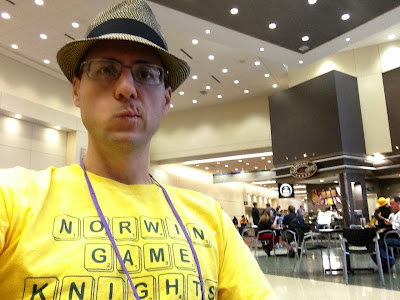 So there is this little local gathering called Gen Con 2015 next week, and that could definitely throw a big wrench in the cogs of my twisted mind.  You may have seen my Gen Con Wishlist a few posts back, and any one of those games could lead me to something totally out of left field.  Perhaps it would be Dragon Age, or maybe a certain Purple Planet. Anything is possible after a week of gaming glory!

I'm well known to be a bit mercurial when it comes to campaign setting selection, so don't be surprised if I do a complete one-eighty.

Now I open this up to all of you. I would certainly appreciate any thoughts or suggestions.

If you are one of my current players, and one of these strikes your fancy I would love your feedback.

Speak now or forever hold your peace!
Posted by Living 4 Crits at 7:17 PM