Knowing When to Run - DCCRPG with the Norwin Game Knights 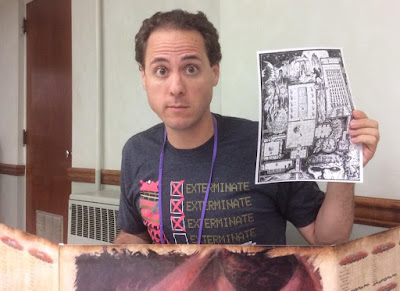 Earlier this week I posted a call on the Norwin Game Knights Facebook page looking for Dungeon Crawl Classics RPG players.  I originally planned to run Carl Bussler's "The Well of Souls", but since the initial reception to my post was rather limited, I thought I'd save the new adventure for Gen Con.  So instead of prepping something I hadn't run before, I just brought along my DCCRPG rulebook and a stack of 0-level characters…

… and Portal Under the Stars…

What I love most about my younger players is their excitement before, during, and after a game.  One of my regulars, Jeremy, was already signed up to play.  But when I told him that we were short players he started recruiting!  Jeremy successfully brought two more into our fold. 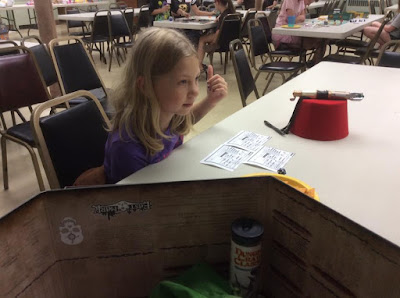 Since Carrie's two friends were part of Jeremy's "draft", she meandered over to the table.

"You don't have to play with us if you don't want to," I told her.  "You've already done this adventure."

"What are you going to play?" she asked.

Carrie gave me an accepting nod but then looked over my game-master's screen.  "Which adventure?" she whispered.

"The Portal Under the Stars," I replied.

Not recognizing the title, Carrie continued the interrogation.  "I've played in this one before?"

"Yes," I said.  "It was the first adventure we played when I bought the game last year." 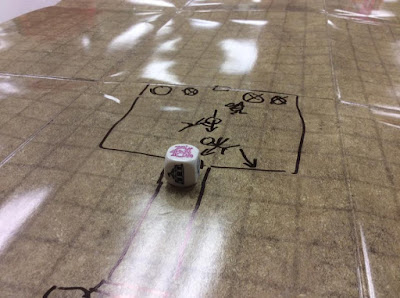 What a Bunch of Rabble


Evan went with some more well known names:
Jeremy decided to name his 0-levels after people he knows:
Braden wanted to stick with ordinary names: 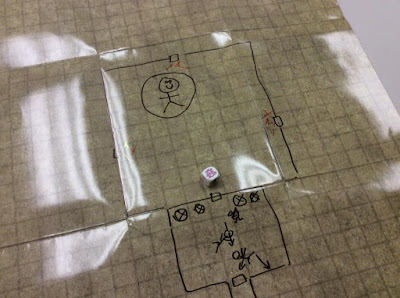 When is Running Away Acceptable

I didn't plan on doing a full write-up for this adventure, since the most interesting part was at the very end.  But I have to get you to that scene, so here's a very brief synopsis.

The door to the first room would claim the party's very first character death: poor Mooshroom.  Carrie wasn't very thrilled that she lost a character only five minutes into the adventure, especially after Tuesday night's Disney debacle.  For the next hour her characters stood back and didn't do much except heckle the rest of the party.

Once inside the dreaded "four spear throwing statue" room, the party decided to forgo logic and attempt a "trial and error" method of diffusing the traps.
I had to have a talk at this point with the players, warning them that we weren't playing Numenera or Savage Worlds. This was Dungeon Crawl Classics, and in DCCRPG you need to use your actual wits, and not rely on rolling skill checks.

I seem to have this conversation a lot! 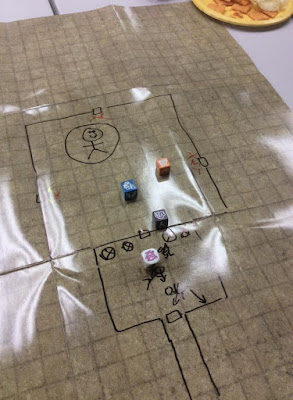 When I revealed the second room, there was a little dissent.  I described the large statue in the room, with a finger pointed at the door.  I explained the scorch marks next to the remaining doors to the room.  I expressed a hope that the players would work through this room's challenge.

If there was one room that my eldest remembered from The Portal Under the Stars, it was this room in particular.  I had to put my finger to my lips.

"Don't say anything," I whispered.

Carrie took this as "don't participate in the oncoming scene of death" and so she decided to split the party a bit and stay behind.  I hadn't brought miniatures, but I found out that old Dragon Dice work great in a pinch!

The flaming finger statue room only cost the party one character, Ethan T., and the party's sole duck.  Once the players realized that the fingertip was the source of the scorch marks, Evan had Fred the Trapper climb up the statue, and he rolled a natural "20" when he tried to disarm the trap.  Even though he wasn't a thief, the idea was sound.

Choosing the door to the north, the party carefully entered a room with a long pool of water, surrounded by columns and populated with six men made out of crystal.  The crystal men were just meandering about, and after several rounds of investigation, I revealed that the creatures didn't seem to be a threat.

Jeremy was intent on changing that fact.

Apparently Brandon Crow wanted to be extra, extra sure that the crystal men wouldn't attack, so he fashioned a lasso and used it to drag one of the creatures towards a pillar.  Well the crystal man didn't take too kindly to this, and decided to repeatedly punch the Rutabaga Farmer.  Brandon Crow endured this until the crystal man was firmly affixed to the column, but took one final punch, killing him, before he could get away.

Evan decided he had enough with the room and both of his characters ran to the door in the northwest, where I placed a "teleportation pad" to the next level…

Eventually everyone else followed and the party was in the next level.  This is where things went… weird. 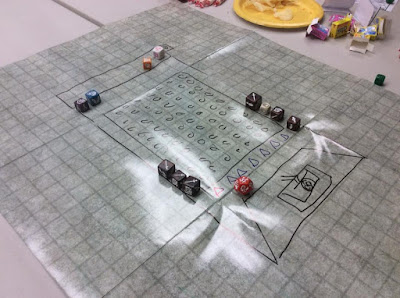 So I described the scene very carefully to the party members:
I don't know where these young players picked up the terrible habit of "throwing" their weapons, but it got really out of hand here.  One by one the players had their characters throw their spears, crowbars, daggers, and hand trowels at the clay statues as they slowly marched towards the party.  It was hysterical.

If you've seen the movie "Shaun of the Dead" just think about the scene when the two characters were throwing random crap at the zombie in their backyard… that's exactly what was happening here.

Trust me, if I had played a box of records in front of the troupe, they would've been thrown.

Once everything of value had been thrown at the statues, I took care of the counterattack.  In one round the clay statues dropped Somme Gui,  and Julia.  Reg U. Larguy was clearly a goner.  That's when Carrie and Evan decided to split.

That's right, rather than heroically "save the day", Dye-Dye, Barry, Fred, and Nike turned tail and ran back into the teleportation portal leaving Reg U. Larguy to die a terrible death. 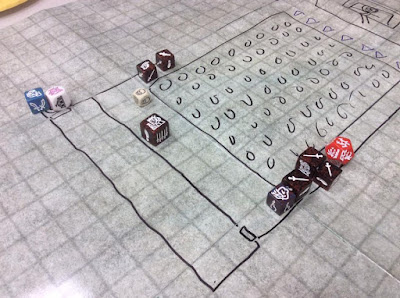 I don't know what else to say.  Evan commented after the game that for him it was more important to have his characters live than to get the gold and treasure at the end of the adventure.  Carrie agreed, and I think Braden was still in shock.

But Jeremy was grinning ear to ear.  "We're playing this next Game Night right?"