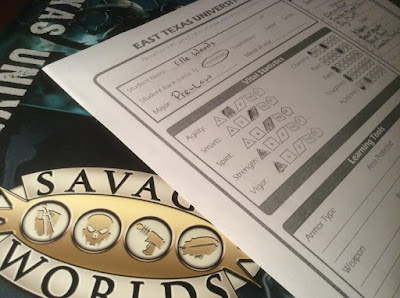 It's late, but I'm still up, working on tomorrow's big game.  Ugh, just looked at the clock, and it's now "today's big game."

In less than twenty-four hours we are kicking off our new East Texas University campaign, and I'm in crunch mode.  The game is scheduled, the core book read, the adventure prepped (almost), and the players have their characters picked out.  Three of the players are going with pre-gens, and my friend Andy is making his own character from scratch.  My wife +Jennifer Walls, being a strange gamer like me, wanted to play something a little different.

She wanted to be Elle Woods from "Legally Blonde."

Let me clarify.  She didn't want to play a character "like" Elle Woods… she wanted to play "as" Elle Woods.  Never one to say no to my wife (at least not when it comes to her RPG characters), I went along with the idea.

We both wanted to make sure that Elle was pretty close to "Legally Blonde Canon", so instead of our original Thursday night plan (watching Mad Max: Fury Road), we turned on Netflix and went right to the source material for this new character. 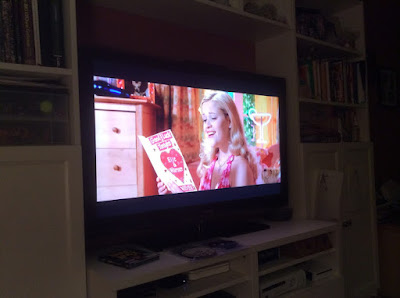 It's been years since we've seen Legally Blonde, so watching again was a great refresher!  I'm sure Jen will work out her backstory about why Elle is in Pinebox, Texas for college, but we were definitely able to create the character.

This is how she turned out:

Attributes and skills were pretty easy.  In the movie Elle is very smart, and not afraid to stand up for herself.  She's also quite skilled in law and fashion.  Jen originally wanted Elle to be a Fashion Merchandising major, but I told her that East Texas University didn't offer that specific specialization.  So she went with Pre-Law.

For Hindrances, Elle's fearlessness and unflinching belief in herself gets her into trouble (Overconfident), when its not outright following her (Trouble Magnet, Minor.)  She also has the tendency to blurt out whatever's on her mind (Big Mouth).

The first edge was an easy pick for Jen… she wanted to be Rich.  I told her that "Noble" gave the same benefits, as well as a +2 Charisma, but it could also mean that her parents (especially Daddy) get too involved in her life.

I already know where I'm going to go with the Noble Edge.

The other two Edges, Beast Bond and Beast Master, have to do with Bruiser Woods, Elle's chihuahua pet (animal companion.)  I asked Jen if she wanted some kind of special "power", like a guardian spirit or psychic sensitivity.  Jen didn't think either of these fit, but wanted me to make sure I put her dog on the sheet.  Well Beast Master gives the player an animal companion like a wolf…

… so I stat'd up Bruiser just like a wolf.  It'll be a hoot when that little chihuahua chases down its first zombie!

So there you have it!  I bet this is the first time Elle Woods from Legally Blonde has been given game stats for Savage Worlds… or any tabletop RPG for that matter!

I'll check back after tomorrow night's game to let you know how it went.