Doctor Who in the Cypher System 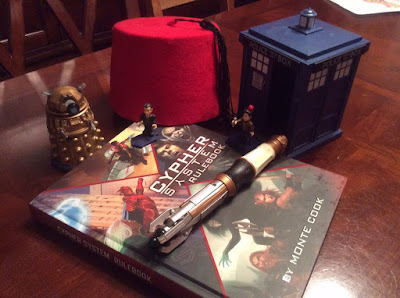 The Clever Jack who Talked to Machines

Two years ago I began my journey into the Ninth World with the release of Numenera.  I remember being completely captivated by the concept of a world a billion years into the future.  After reading through the core book cover to cover, all I could think about was getting to a gaming table and rolling some dice.  My only challenge was that my regular gaming group at the time was in the middle of a Savage Worlds campaign.  If I was going to run Numenera, I would have to do it as a one shot.  Lucky for me that I had just founded a new gaming club, the Norwin Game Knights!

Our club was only two months old, and we were preparing for our November event.  I ran board games during our September and October events, but for November I wanted to break out a true tabletop role-playing game.  It was the perfect excuse to give Numenera and the Cypher System a shot! 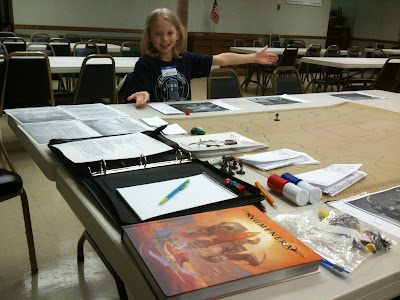 Given how easy it was for me to learn the rules just by reading the Numenera core book, I opened the game up to any and all players, no matter what their age.  With that said, I invited my nine year old daughter Carrie (wow, she was nine once?) to take part in the game.  I used  the pre-gen characters from Vortex for most of the players at the table, but Carrie wanted to play someone else…

… she wanted to play The Doctor!

You need to understand that our family is obsessed with Doctor Who.  While we can't claim to be lifelong fans, we can draw our lineage back to November 2012.  It was around that time that we ditched cable and instead started streaming Netflix in its place.  We were looking for shows to watch and we started with Torchwood.  I'm still a little bummed that we didn't get more than four seasons of Torchwood, but no matter.

Of course Torchwood led to Doctor Who and my wife and I began our journey like so many others with the Ninth Doctor.  Soon my eldest daughter Carrie was watching and then Evie.

The rest is history. 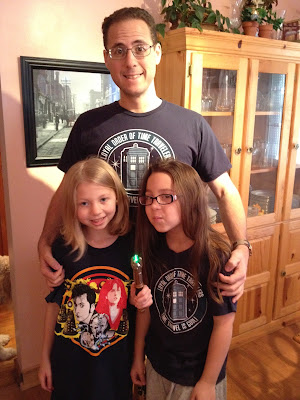 Building Carrie's first interpretation of The Doctor in Numenera was very easy.  While she wanted to pay homage to her favorite Doctor (the Tenth, David Tennant), we agreed to build something more generic.  The backstory of course would be that the Doctor was stranded in the Ninth World, one billion years in the future, and needed to find a way back to the TARDIS.  For this build we made The Doctor a Clever Jack who Talks With Machines.  We went back and forth at the time with Jack or Nano, but given the Doctor's penchant to come up with skills and abilities on the fly, Flex Skill made a lot of sense.

After two years of playing Numenera, The Strange, and now the Cypher System, I've had a lot of time to think about how I'd build the Doctor again should he (or she) decide to show up at our gaming table.

If you've been a regular reader of my blogs you know that I like to keep things "rules light".  Rather than come up with all sorts of alien species rules for Time Lords, I think that a little creative storytelling from players and GM's can make Time Lords fit into any Cypher System campaign.

Really, this is the probably the biggest challenge to using a Time Lord like the Doctor in a tabletop RPG.  When a Time Lord dies they have the possibility to regenerate, returning to life but with a new personality and perhaps a few new skills (although retaining the memory of their former life experiences.)  Let's tackle that last part first.

In most campaigns, when a player character dies, the GM is open to letting the new character join at the same tier, or near the same tier as the rest of the group.  Regeneration is just as easy an explanation for this situation as would be a new hero joining the team.

Should a player choose to be a Time Lord, however, they should take advantage of the ability to take on a new Descriptor and Focus while perhaps retaining their Type.  Although the latter is not necessary, I do feel that some connection to the previous character should remain.

Given the three portions of a character's build, the Cypher System offers a unique opportunity to not only play a Time Lord, but also to embrace his or her ability to change from regeneration to regeneration.

Watching Doctor Who, I think one of the most entertaining parts of each Doctor is how they know just about everything there is to know.  It doesn't matter what they face, or "when" they face it, they typically can pull just about any idea out of their head either on the fly or from one of their previous life experiences.

Lucky for us, the Cypher System already gives us a mechanic to deal with a Time Lord's wealth of knowledge!

Page 222 of the Cypher System Rulebook describes Short Term Benefits for Experience Points.  By spending 2 xp, any character can temporarily gain a skill.  Again, no need to change the rules or come up with something long and complicated.

This is where we have to split up The Doctor from the rest of the Time Lords.  A Time Lord could of course be any of the four Types from the Cypher System: Warrior, Adept, Explorer, or Speaker.  For the Doctor himself (or herself… one day, right), I think that Explorer with the Technology Flavor is the right pick.  The Adept seems to be magic or psionic oriented, and when I watch Doctor Who I see a jack-of-all-trades Explorer, ready for just about anything.  The Technology Flavor could be used to power the Sonic Screwdriver.

While a Time Lord could probably be anything they want, there are some Foci in the Cypher System Rulebook that certainly fit should you want to play a character that resembles everyone's favorite galavanting Gallifreyan.

Personally, since I like to think of The Doctor as someone who doesn't rely on "psionics" or "super powers", I tried to steer clear of stuff that could be more supernatural.  Some of these may push the limits, but remember that Sonic Screwdriver (or Sunglasses).

If you've read this far, its time for a treat (or not, as we may disagree).  For this is the part where I take all the modern Doctors and give examples of how they can be built using the Cypher System Rulebook.

Since I've only been watching the show since Christopher Eccleston, and although I've seen a few episodes featuring the First and Fourth Doctors, I'm going to limit my examples to what I know.  But please, if you want to help with the rest of the Doctors, feel free to let me know your builds!

I've spent a lot of time covering how to build a Time Lord, but how could The Doctor  fit into your own campaigns?

The most obvious answer is to just use the Cypher System to run a Doctor Who campaign "as is."  Perhaps you've picked up Doctor Who: Adventures in Time and Space but just don't want to learn another rule system (hmm… sounds familiar).  If that's the case, it's very easy to grab your Cypher System Rulebook and just start throwing adventures together.  Perhaps you want to recreate a scene from the Matt Smith era of Doctor Who, and your party will include Amy Pond, Rory Williams, and River Song.  Or maybe you want to tell a future tale with the yet to be featured Fifteenth Doctor.

With the right table of players, especially if everyone is a true Whovian, you can have hours of fun just with the basics….

In the First Series of Doctor Who featuring the Ninth Doctor, the second episode takes place five billion years in the future.  So that's a full four billion years after Numenera!  Perhaps the Doctor Who universe coexists with that of the Ninth World, and the Doctor and his (or her) companions arrive just in time to deal with some aggressive abhumans near the Beanstalk.  Now that Into the Night is in print, the players' Night Ship could encounter a strange, spinning blue box in the void.  Just go crazy!

I fondly remember taking part in the Kickstarter for The Strange during the Doctor Who 50th Anniversary. In fact, that picture taken above of me and the girls was the fateful night that I became a backer for The Strange!  When I first ran The Strange, and was exploring the idea of The Estate, I immediately thought of Torchwood.  Heck, in my Strange universe Torchwood exists… which means… well you know what that means…

But maybe you want to break the universes apart, and have Doctor Who exist only as fictional leakage.  Maybe the TARDIS itself is a recursion, or just a single location in a particularly engaging episode.  If you have a few Whovians in your gaming group, a week featuring their favorite sci-fi TV show could make for some happy players!

Agree?  Disagree?  Ideas for the First through Eight Doctors?  Let me know!  Feel free to respond below with your specific builds.

… or a bitchy trampoline. 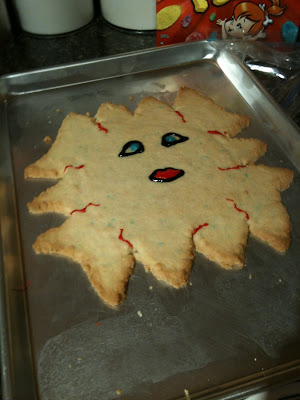 Email ThisBlogThis!Share to TwitterShare to FacebookShare to Pinterest
Labels: Cypher System, Doctor Who, Numenera, RPG, The Strange, The Strange RPG