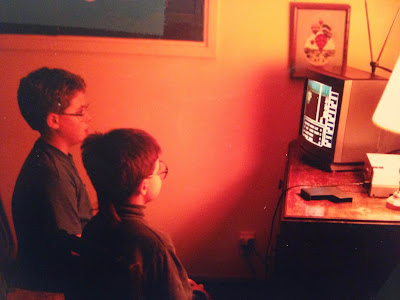 Pixels are my Old School

See that picture up there?  That's me (on the left) and my brother (on the right) playing the original Final Fantasy for Nintendo.  I'm guessing this picture is from around 1989.  At this point in my gaming career I still hadn't discovered tabletop RPG's.  That part of my life would begin less than a year later.  Since my discovery of tabletop RPG's occurred around the same time as my NES and early JRPG days, the two events have been forever linked.

Heck, I even wrote a full blog post about the whole connection last winter.

For those of you who haven't touched a Nintendo, or who shy away from console RPG's, the J in JRPG stands for "Japanese".  It's safe to say that most console RPG's from Japan include anime-inspired art, main characters stricken with amnesia, and at least one anthropomorphic race or species.

It's been a while since I did a full list of new occupations, but had a great time coming up with those Star Wars - Stormtrooper themed options in the spring.  So I thought "why not capture that feel for Dungeon Crawl Classics games?"

What I've compiled is a full list of 100 occupations, complete with starting weapons and trade goods, that can replace Table 1-3 in the Dungeon Crawl Classics Role Playing Game rulebook.  Please note that while I'm the one that put the list together, many of these ideas are straight from the minds of +Paul C and +Taylor Frank, who both contributed a TON of ideas on a thread in the DCCRPG Google+ group today.  Thanks guys!  Also gotta give a shout-out to my daughter Carrie who came up with the Pokemon…er… I mean "Pocket Demon" occupations.

Each and every one of these occupations could easily fit in a Final Fantasy, Dragon Quest, or Chrono Trigger game.  Some of these refer to weird races/species, such as Automaton or Moonfolk, but for now just treat them as humans.  Or maybe you could make the Moonfolk elves.  I don't know, I haven't come up with new races or classes for these…

(Each occupation is organized as "title - starting weapon - trade good")

Finishing up this list I got to thinking of how this could all fit in a really fun game world.  Where is the Celestial Tree, and why is it celestial?  What is the Underworld like?  How dangerous is that Magma Prison?  I may have to set a few adventures in this stereotypical, cartridge-themed universe…

Feel free to offer up some more character options, or even some ideas for additional rules.  Also, if you spot any of the many dozen easter eggs in here please call them out!