So Shiny, So Chrome - Buying my New Ride 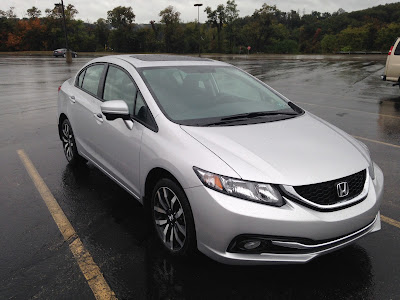 So I have arrived in Valhalla... shiny and chrome!

Okay, this is not my typical gaming post.  Sorry!

I spent a year as an accountant (and weekend hot dog/hamburger cook for customers) at Premium Motor Cars on Route 8 in Allison Park, PA between 2000-2001 while I was in college.  I love spending time at car dealerships and test driving cars...

So if you aren't interested in reading a long, and drawn out car post, best to stop here.  Otherwise, if you are as fascinated in the car buying process as me (and I'm obsessed) keep reading!

Immortan Joe would be pleased

After five weeks of car researching, test drives, and lots of discussions and I ended up getting a 2015 Honda Civic from Valley Honda in Monroeville.  I've been high on cars and low on cars, but this ended up being the best deal, and I got just about everything I wanted in a car.

My car search had come down to the Mazda 3, Honda Fit, Toyota Corolla, and Honda Civic.  There were certain creature comforts I really wanted in a car: heated seats, moon roof, 8 way driver seat, and fog lamps because I HATE the look of those fake "holes" in the front.  I also wanted something that would be great on gas and really fun and nimble to drive around.

By Monday I had driven all of these cars except for the Honda Fit.  I really like the Mazda 3, but the higher price point of the grand touring model (the quote I got was around $23,500, MSRP around $26,000 for the "i" model) compared to the rest of the cars on my list gave me pause.  I called the Mazda dealership to confirm their "best deal", and the price ended up being $24,700.  So... it went up.  Weird.  The salesman just said that one of the incentives went away.  I told him that we were way far apart now on where I wanted to be, and that I was going to pass unless they could come down, and come down quickly.

In the meantime, on Wednesday I went out to drive the Fit and the Civic Sedan at Valley Honda.  I drove the Civic Coupe with Jen a few weeks ago at another dealership and while I liked the driving characteristics, Jen didn't like the back seat.  I also didn't care for the salesman or dealership, and figured I wouldn't be buying from them.  The Fit was big and spacious for being the size of a teacup, but the drive was harsh and I could hear every bit of road noise.  Also, they didn't have any wiggle room on the price since they were all 2016 models on the lot.  The cheapest one was around $21K MSRP.

Jen and I loved the Civic Sedan.  Personally, I like driving small cars, but the back seat was really comfortable, and it had a really nice leather interior.  The leather in a Civic is much more "cushy" than what was in the Mazda.  There was only one feature I wanted that the Mazda 3 had that was lacking in the Honda Civic: the hatchback.  But when we finally finished working with the price, the cost difference wasn't worth paying more.

I need to give a very sincere thanks to my best and oldest friend Chris​ for some of his comments and advice, as well as some of the posts he throws up from Mr. Money Mustache.  Sure, I was going to buy new, which is not very "Mustachian", but I tried to look at everything as objectively as possible and how I could save the most money in the long run.  And Chris put the bug in my ear to stay focused on reliability and the longevity of the car's lifespan.  From everything I've read and witnessed, Honda beats out Mazda.

So how did I make out on pricing?  I think I did very, very well, and I went about this car shopping experience a bit different than in past purchases... that's the whole reason for this post.

Once I had finished my research (I think I read every online review, and watched quite a few videos on YouTube), I went to Edmunds.com and used the PricePromise to get a quote from Valley Honda on the 2015 Honda Civic EX-L.  The sticker price was $23,750 after all options.  I submitted a request for an instant quote and the price came back at around $22,100.  Already that was over $2K less than the Mazda 3.  I called and set my appointment to drive the car, but in the meantime I got an email from the internet sales manager at Valley Honda dropping the price to $20,400 at a 1.9% interest rate.  The 2016 Civic is going to be a complete redesign, so I'm sure this being the last year for the model had something to do with the pricing.  After the test drive we sat down to talk price.  The $20,400 was pretty much set in stone, but I asked about the interest rate, since the deal at Honda.com on all '15 Civics was 0.9% for 60 months (I'll pay in 48 or less, but it's nice having that monthly buffer.)  It was no issue getting the 0.9%.

I definitely felt like a winner!  Maybe some harder hagglers could've done better, but I'm quite happy with how things turned out.  The price difference between the Civic and Mazda 3 ended up being over $4,000 for just about every feature, and all I missed out on was the hatchback and 12 horsepower.  I can live with that.

Gotta also give a big shout out to our salesman Edan.  The dude was incredible, and probably one of the best salespeople I've ever dealt with.  Not pushy, and very willing to work with us and spend a lot of time in each car.  He made the entire experience FUN.  The test drive course he picked was long and detailed.  With the first dealership it was far too short and boring.  Maybe its because I've spent some time working at a car dealership when I was in college, but I really enjoy working with great salespeople, and would always prefer to buy something from someone who took care of me.  The F&I department was a breeze as well, and didn't give me any grief for not taking any additional options (all I added was all weather floor mats).

So there you go!  I hope to be driving this machine for the next decade.  Heck, it'll probably be the car both Evie and Carrie learn to drive with.

My favorite car research site, Edmunds.com, is where I started my price negotiations.

I love to plug great service, so definitely check out Valley Honda in Monroeville if you are in the market for a car and live in Western Pennsylvania.  Although I'm sure there are a lot of nice folks who work there, I dealt with Edan Alexander and would most certainly do so again.  Jen was checking out the Pilot when we left but her '09 Traverse is paid off with a lot of life left!
Posted by Living 4 Crits at 12:33 PM