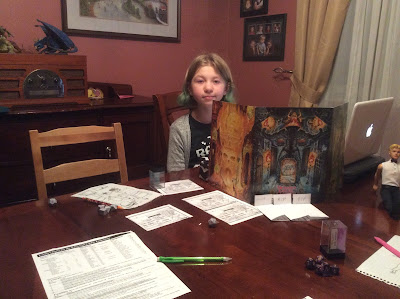 Look at that evil face!

My little girl is growing up.  It really does happen too quickly.  One moment I'm teaching her how to play Chutes and Ladders, and in the blink of an eye she's slaughtering all of her family's characters in a Dungeon Crawl Classics RPG 0-level funnel.

On Monday night, to celebrate a day off from school for President's Day, Carrie ran our family through The Zombraire's Estate, a Basic Fantasy RPG adventure that can be found in the Adventure Anthology 1.  Inspired by our recent trip to Michigan where she co-judged Grimtooth's Museum of Death with her old man, Carrie wanted to run the adventure using the Dungeon Crawl Classics rules.

To commemorate Carrie's first time judging DCCRPG on her own, we filmed the entire event and posted it on YouTube for your viewing enjoyment:


After the adventure, Carrie shared with us the complete list of slain characters, featuring comments on their terrible deaths:

I should note, even though I expect a lot of character death in a 0-level funnel, I discovered that The Zombraire's Estate was designed for 2nd to 5th level BFRPG characters...

... no fair Carrie!  No wonder those undead cows did so much damage!