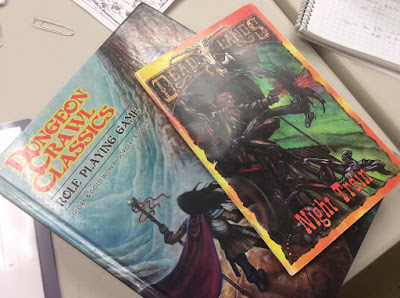 You don't know absolute chaos until you've tried judging a Dungeon Crawl Classics RPG session for eight gamers between the ages of ten and thirteen. Last night was nuts… and I can still hear the yelling in my head. But my players (including two newcomers to DCC) left the table with smiles and stories of the terrors that plagued the small Kansas town of Varney Flats…

… and that's what counts!

Last night was my ninth time running DCCRPG with the Norwin Game Knights, and the fifth game of our ongoing Crawling Under a Broken Moon campaign. But it was my first time running a game as part of the Goodman Games World Tour as a member of the Road Crew! Not only did I receive positive vibes for judging this public event, but I'm now going to qualify for some sweet DCC swag.

If you have even an inkling of running DCC in the community, I strongly urge you to check out the Goodman Games site and sign up. Pins, pens, dice bags, dice… heck, if I had signed up back in July, I'd be sitting on stacks of swag!

After completing Frozen in Time during last month's Norwin Game knights event, I had to come up with something equally crazy for February. At the end of the last game, the party showed up hundreds of years in the past, in the streets of an old west town. I would need some way to run DCCRPG in the west, along with pre-gens for new players that could fit accordingly.

Stormlord Publishing's new DCC Zine gives Judges everything they need to run a fantasy game in the old west. I've had the first two issues in my hands for quite some time, and have been very excited to break them in. Since we had two new players, I used the 0-level character generator form Purple Sorcerer Games to have a stack of fodder on hand. There's even an option to use the 0-level occupations from Black Powder Black Magic in Purple Sorcerer's Generator!

For an adventure, I dipped back into my days of gaming past with an old Deadlands favorite: Night Train by John Goff. One of the Deadlands dime novel adventures, this little quest came with a great short story, a horrifying adventure, and a scenario for the Great Rail Wars.

Converting the adventure from Deadlands Classic to DCCRPG/Black Powder Black Magic was really easy. Actually, I only needed to create a single monster: the Nosferatu. DCCRPG doesn't come with a "stock vampire", but coming up with unique undead is a snap.

I took the stock zombie and modified it for having a higher Strength and Agility. Then I used Table 9-6: Traits or Properties of Undead to give the Nosferatu a couple of unique twists. In the original adventure, the Nosferatu could only be defeated by cutting of their heads. I figured that an easier way to manage this in the game (with thirty of the creatures) was to require the killing blow to be from a slashing weapon. This worked best with a table of youngsters, but I think if I were to run this again with grownups I would include a Luck check with the slashing attack.


It was a quiet Monday morning in the sleepy Kansas town of Varney Flats and both Miller and The Terminator's Second Cousin were minding their own business on a pair of rocking chairs, having coffee and watching Crazy Colton White shoot his mouth off in the street.  Deputy Parrish stood next to the two men on the porch of the closed Land Office that now served as a seedy saloon.  The Deputy, looking after Varney Flats since Marshal McBride went missing the day before, had enough on his mind and didn't feel like taking Crazy Colton into custody.

Fortunately for the Deputy, he wouldn't need to bother.

A bizarre scene played out, right in front of the townsfolk.  First, a bright blue circle appeared in the middle of the street; a violent hole in the space-time continuum.  From out of this portal, emerged a motley band of miscreants from a post apocalyptic: an incredibly short bearded chap with a black powder musket, a pointy eared longbowman adorned in gleaming armor, a  robot with the Google logo stamped across its chest, a five-foot tall mutant tortoise-girl, three anthropomorphic ducks fused into a single rolling ball of feet and feathers, and a sentient gelatin dessert.

The Deputy observed as Crazy Colton marched up to the newcomers in a very threatening manner, shouting all kinds of terrible insults.  That's when the dwarf and the rolling fused ball of duck opened fire.  Although the dwarf missed with his black powder musket, the duck-ball's aim was true.  Colton exploded in a shower of blood and gore as the bolt from a Mark V blaster rifle struck him in the belly.

Rather than see these newcomers as a threat, the Deputy approached (dragging Miller and The Terminator's Second Cousin for morale support) and asked for a favor.

A few days ago Marshal McBride took buffalo hunter and accused murderer Abner Knaggs into custody.  Now, several townsfolk wanted to capture Knaggs and lynch him for the accused crimes.  On one hand Deputy Parrish needed help keeping the townsfolk away from Knaggs so that the accused could stand trial, but he also needed someone to find the Marshal.  The Deputy could pay the part of time travelers $100 for their assistance.

Miller and The Terminator's Second Cousin agreed to accompany the time-travelers, along with two other townsfolk: Penny and Chuck.

Speaking for the party, Lord Old Man Legolas of Ikea agreed to the job.

The party decided to first search for Marshal McBride, so they entered the Land Office saloon and asked around.  Jel offered to pay the bartender in gold pieces for drinks, which meant everyone in the saloon could drink.  This bought a loosening of the townsfolk's lips.  After overhearing that the locals were planning the lynching for seven o'clock, the time-travelers knew that time was of the essence.  It was still early in the morning, and if they were going to go out looking for the Marshal, they would have to move fast.

Several of the saloon patrons suggested that the party head east to the Smythe farm, ten miles to the east.  That's where the Marshal was going to begin his investigation.  Using Lisrayten's 20th century .44 magnum as collateral, the time-travelers equipped themselves with horses and rode off.

Arriving at the farm, the time-travelers found a terribly gruesome scene.  Man-sized, clawed footprints surrounded the farmhouse, and blood covered the floors and walls inside the building.  Fenrir recovered the Marshal's peacemaker on the eastern side of the building.  Lisrayten, Jel, and Miller explored the second floor of the building, finding a similar scene.  In addition, ten fingernails were left in the headboard, pulled from the roots.

Hoping that fortune could assist the party, Jel the wizarding gelatin dessert tried to get Miller to draw a lucky sign on the floor.  Miller started the process, but soon stopped as he heard an ominous yet soothing voice in his head urging caution.

[I informed the party that this was Morgan Freeman's voice.]

Miller continued drawing a bit more but then ceased.  Frustrated, Jel started drawing the symbol before feeling his luck drain from his mind.  This house was cursed, and no amount of luck could help the time-travelers while in within the walls.

The party left the building and traveled north until they reached a set of train tracks.  The clawed footprints could be tracked back to the tracks, but ended on the southern side.  Whatever attacked the house must have come from something riding the rails, as nothing could be found on the northern side.  Before returning back to Varney Flats, the party traveled east along the rails, another ten miles and found another house.

Same story, lots of blood, lots of claw marked tracks, but no survivors.  It was now getting late, so the party needed to head back to Varney Flats.

The sun was setting when the time-travelers returned to Varney Flats, and they arrived just in time to stop the lynch mob.  A dark train whistle sounded, and Lisrayten hoped that she could grab Abner, and drag him to the train for safety.  But this wasn't that kind of train.

As soon as Lisreyten and the rest of the party reached the train, dozens of murderous, vampiric creatures poured out from the cars, descending on time-travelers and townsfolk alike.

The terrible minions of death claimed the lives of Penny, Chuck, and the The Terminator's Second Cousin.  The time-travelers put up a spirited defense, slaying several of the creatures by hacking off their heads, before realizing that there just too many of the beasts.  After noticing that the train was controlled by some kind of weird zombie, the party destroyed the undead and climbed in to the engine and first car.

Maybe they couldn't kill all of the monsters, but they could jack their train!

Realizing that magic was needed to power the engine, Lord Old Man Legolas of Ikea spellburned himself for the necessary energy, and started the train moving.  When the train wasn't moving fast enough, Fenrir disconnected all of the cars with the exception of the first, and the time-travelers (along with Miller the miller) left the townsfolk of Varney Flats to fend for themselves…

… at least they saved the murderous, no good, thieving buffalo hunter Abner Knaggs.