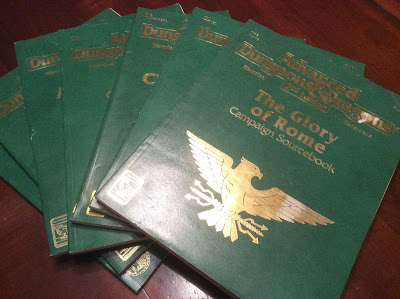 Early one Christmas morning in the 1990's, I stumbled out of bed and into the living room of my old house in Levittown, Pennsylvania.  I think I was around fifteen years old, but can't be certain now.  Although it had been years since I believed in Santa Claus, my parents never gave up the tradition of leaving presents for both me and my brother under the Christmas Tree.  Being the good, geek-inspiring parents that they were, typically I find a gaming book or two waiting for me amidst a sea of classic computer games like Privateer or Master of Orion 2.

This Christmas in particular I discovered a book that I didn't even know existed.  It was an Advanced Dungeons & Dragons 2nd Edition softcover book, very similar to my Complete Book of Elves or Thief's Handbook.  But instead of the brown cover, this book was green, with bright gold lettering.

"The Glory of Rome - Campaign Sourcebook."

What a perfect gaming gift!  My mom and dad knew that I was a fan of Roman history, ever since watching the original Spartacus with Kirk Douglas.  Opening this intriguing guide I quickly learned how to run complete AD&D 2nd Ed. sessions in the ancient Roman Republic, and how to integrate some classical mythology into my existing campaign.  This was where I first learned about the "pilum", the devastating Roman heavy javelin, and that "garum" was a funky fish sauce made from rotten guts.  From the chronology of the Roman world to detailed accounts of Gladiatorial combat, The Glory of Rome had everything that a multi-classed History Fan/Tabletop Gamer could desire!

The Glory of Rome sparked a love for historical role-playing, that has stuck with me, and certainly blossomed as I've grown older.  I continued collecting these beautiful green gems, and each would play a significant role in developing my craft as a game master. 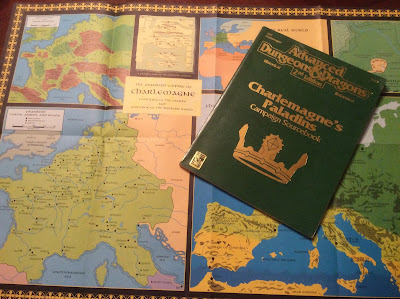 Age of Heroes, a sourcebook covering Ancient Greece, showed up in my house during the last days of high school.  I used it briefly during a Planescape campaign, and then later during a full-fledged, home-brewed, Greco-Roman inspired college campaign.  Once I acquired the Celts Campaign Sourcebook, my collection covered the entire ancient Mediterranean.  Although Age of Heroes tends to spend a lot of time on the shelf (I prefer the grittier realities of Rome to the flamboyant gods and goddesses of Greek mythology), Celts showed up in a long running D&D 3rd Edition campaign as inspiration.

Interested in exploring Europe's Dark Ages, I discovered Charlemagne's Paladins while in college as well.  I used the themes of Carolingian Western Europe for a very successful Ravenloft campaign one summer.  To this day, I use Charlemagne's Paladins alongside the Vikings Campaign Sourcebook when I want to give my Dungeon Crawl Classics RPG sessions a historical twist.

A Mighty Fortress arrived late on my bookshelf, at the tail end of AD&D 2nd Edition and the beginning of D&D 3E.  This dark and gritty book covers the battles of the Thirty Years War, and is brought completely to life by the interior art.

Here's a quote from the credits that shows the authentic direction of A Mighty Fortress:

"All of the interior illos in this book are the work of contemporary artists and illustrators, as noted."

That's right!  Rembrandt is the interior artist for this Dungeons & Dragons sourcebook!

The only green AD&D 2nd Edition Historical Reference sourcebook I haven't really used that much is The Crusades.  Not that there is anything wrong with the book, it was an interesting read and would match up very well with a campaign mirroring the first Assassins Creed game.  I've just never had the desire to run a game during that period of history...

... but to complete my collection I had to have the book!

Next time you are in a used game store, and you happen to spot one of these green-bound historical references, pay the $10 and walk away with a winner.  Who knows, maybe you will learn a thing or two!

If, like me, you are a fan of these historical references, share your experiences.  How have you used these books at your table?  Do you run entire campaigns during these time periods, or do you pilfer the parts that work best?
Posted by Living 4 Crits at 7:26 AM