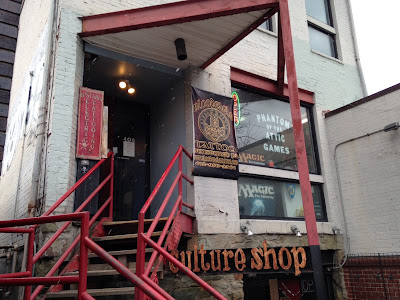 DCC RPG Pittsburgh at Phantom of the Attic

A few weeks ago I met +Michael Bolam on the DCC Rocks Facebook Page.  He was creating a new Facebook group for DCC'ing in the Pittsburgh area, so naturally I joined.  When I saw that the next event was at Phantom of the Attic, a friendly local game store in Oakland (the university district of Pittsburgh), I wanted in.  I recently joined the Goodman Games Road Crew to run Dungeon Crawl Classics as part of the 2016 World Tour.  So I asked Michael if he'd like a second judge to come join him, and he was totally cool with the idea! 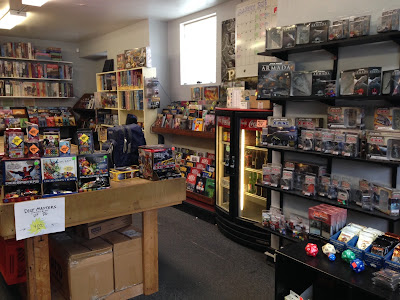 I've been visiting Phantom of the Attic in Oakland since moving to Pittsburgh in December, 2000.  Whenever I get asked about our local FLGS's, this joint is the first I mention.  The location is right on Craig Street between the University of Pittsburgh and Carnegie Mellon University.

I get nostalgic just thinking about the store!

Right when you enter Phantom, you are greeted by a friendly staff, and the awesome gaming glory hits your eyes.  There is a hoard of dice on your right, and a crazy-huge expanse of games to your left.  Along the side wall is a phenomenal selection of gently used role-playing game books, which is what first led me to Phantom in 2000.  Back when I was a broke college gamer, I needed to save as much cash as I could.  I could always count on Phantom to have adventures for a gamer on a budget.  My budget may be a bit higher than in those old days, but I still had to go through all of the "New Arrivals" in the used bins.

After setting up the tables, Michael split up all of the gamers who showed up to play Dungeon Crawl Classics.  Using 20-siders, the four lucky players who rolled highest got to come play at my table.

I'm always nervous before running an adventure, even with a familiar system, and especially when it's all new players.

For our adventure, both Michael and I showed up to run Sailors on the Starless Sea by Harley Stroh.  My table included two experienced DCC veterans who've played with Michael before (Gina and John) as well as a pair of newcomers to this wonderful game (Joe and Jon).  For a twist, rather than just handing out standard 0-level characters generated by the Purple Sorcerer, I gave each player one character from the Purple Planet generator.

So, in addition to our farmers, wizard's apprentices, and ditch diggers, we had a Spartan Wrestler, a French Anarchist, an Earthling Future Man, and a Sci-Fi Movie Extra (with a Godzilla costume!) 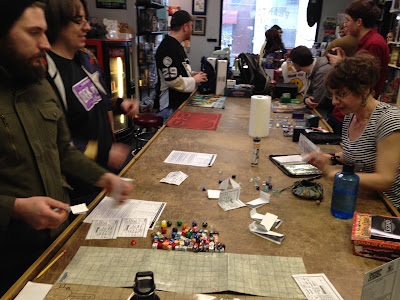 Since I've already featured Sailors on the Starless Sea three times on Living 4 Crits (That 70's Game, Disney Crawl Classics, Cypher Crawl Classics), I didn't plan on writing out a full adventure summary for this event.  But I still have to share some of the highlights of our fantastic quest! 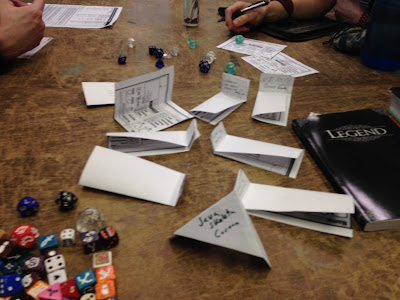 I'm really looking forward to returning to Phantom of the Attic as part of the DCCRPG World Tour 2016!  Stay tuned, as we're already looking for dates in April!