What's in Your Dice Bag? 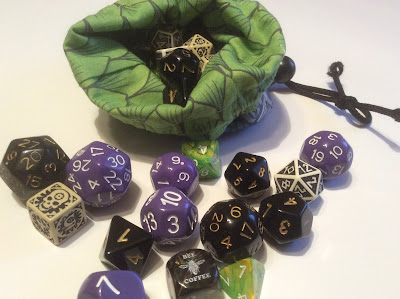 Role-players and their dice... such a love/hate relationship.  Some gamers will spend hundreds of dollars amassing great hoards of dice, only to #DiceShame them all over Twitter and Instagram, with a complete disregard to the polyhedrals' feelings.

Other gamers will roll the same twenty-sider over and over again, year after year, until the tiny piece of plastic resembles a near perfect sphere, with the edges worn down to nothing.  I saw one of these dice yesterday, when John from my DCC event was tossing around his twenty-sider.  It was a small, white die with numbers that were barely legible.  Worn, but not tired, the die served his 0-levels well during our journey to the Starless Sea.  I'm sure that twenty-sided die has seen many characters come and go, and I would love to hear its full story.

John's die got me thinking about my own dice, and how each one means something different to me.  I can usually remember where I got each one, at least with my favorites.  I collect my dice in very specific boxes and bags, so that I never mix them up.  Recently I've been assembling a new bag of dice to celebrate my "rebirth" into old-school fantasy gaming following years of 3rd and 4th Edition D&D play... 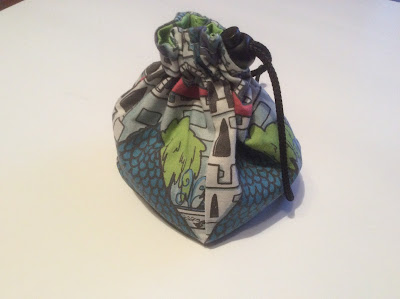 Here it is... ain't it awesome?  The most special part of this collection is probably the bag itself, as it wasn't purchased.  At Gen Con 2014 I met +Shannon Slakinski and her husband +Ray Slakinski at my 10am Saturday game of The Strange.  What followed was one of the top five games of my entire life!  This adventure was so fantastic and the player chemistry so in sync that we still keep in touch.  At some point during the game, Shannon said that she made dice bags, and at Gen Con 2015 she gave me one! 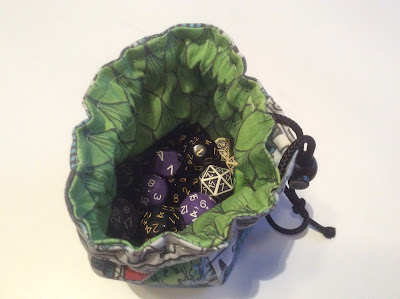 The outside of the bag is a castle, and when you open it up it's all dragon scales!  Once I put my first few dice in here I just knew that this bag would have to be dedicated to my old-school games, specifically: 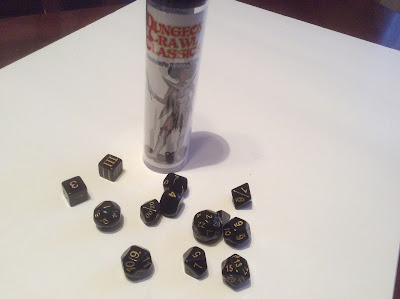 The first addition to my OSR bag predates the bag itself!  These are my Dungeon Crawl Classics: Shanna's Weird Dice.  I bought these at Gen Con 2014 on Thursday, just a month after buying the Dungeon Crawl Classics rulebook.  That night the dice were baptized in the blood of player character death during a pickup game of Adventures in the East Mark at the JW Marriott.  If you aren't familiar with weird dice, you'll note that there is a D3, D5, D7, D14, D16, D24, and D30 in addition to all the regular faves. 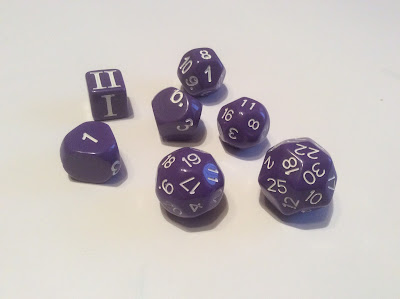 At Gen Con 2015 I purchased the Peril on the Purple Planet boxed set.  It was one of my first purchases of the convention, and I had been waiting patiently to buy it at the Goodman Games booth on Thursday.  Immediately after I realized that I'd need some purple dice to match!  These came from Impact Miniatures, and I'd eventually get sets for all the kids in our house. 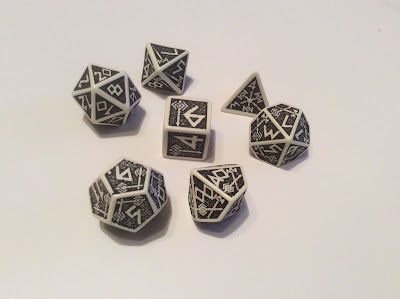 Gen Con 2015 was a bit of a "dice convention" for me.  I know I wanted Q-Workshop Dice, because they look so awesome, and each one seems to be intricately carved... even if they are mass produced plastic.  These may appear to be Dwarven Rune Dice, but to me they are my Viking dice, purchased as a celebration of my Viking Crawl Classics mini-campaign last summer!  Ragnar Lothbrok would be proud! 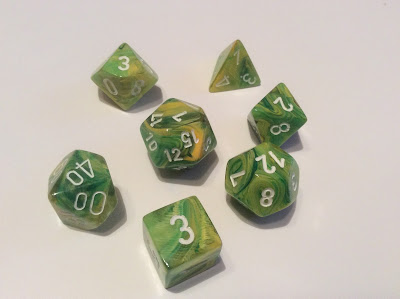 Last month Carrie and I traveled to Michigan for a weekend of gaming to celebrate my good friend +Jeremy Land's birthday.  While at Out of the Box Gaming in Grand Rapids I did a little shopping and found these beautiful green dice.  After several  months of a very successful (and off the wall) monthly DCC campaign using the Crawling Under a Broken Moon setting, and hoping that the Mutant Crawl Classics Kickstarter was approaching, I wanted a set of post apocalyptic dice.

These plutonium and slime-green dice would work great! 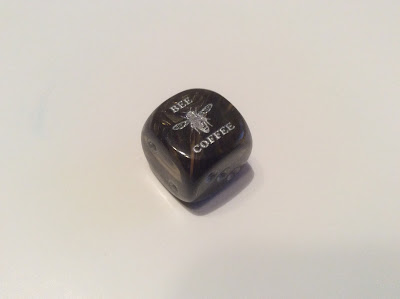 When I found out that Bee Coffee Roasters in downtown Indianapolis gave out a "free die" after so many beverage purchases during Gen Con 2015, I made sure to fill up that card.  Free dice giveaway is a surefire way to get gamers into the store... although being right across the street from the convention center doesn't hurt! 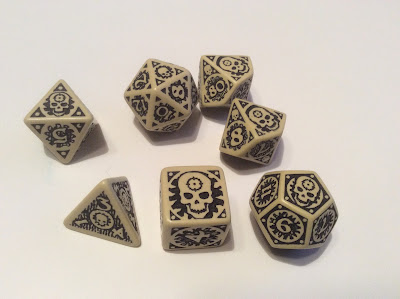 If you are an OSR fan who hasn't heard about Adventures in the East Mark, then shame on you!  Better known as La Aventuras en la Marca Del Este, a Spanish OSR game, I fell in love with the purity of this system and the gorgeous artwork back when XD Publishing did an English language translation  Even though I don't speak Spanish (yet), I even got my hands on the PDF's for the native Spanish versions of the subsequent boxed sets.

Best known OSR secret:  Q-Workshop did an Adventures in the East Mark dice set, and it's PERFECT!  I managed to grab one up, and I love the look and feel of these bone-colored dice.  There's a skull on each die, and as a DCC judge, I love seeing those skulls show up when I roll out in the open!

So what's in your dice bag?

I'd love to hear some of your own favorite dice stories, or see some pictures of your most treasured possessions.  We see so much dice-shaming in the world... let's send out a positive message for these great tools!