Into the Arena - 0-level Gladiators for DCCRPG 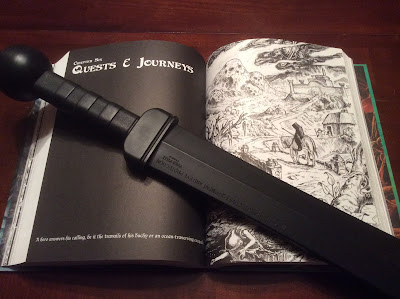 A few weeks ago I posted on the DCCRPG G+ Group about an idea I had for 0-level Gladiator characters.  I had some ideas of my own, but I wanted to get feedback from some of the game's seasoned veterans.

What I have here is possibly a rough copy of something that I'd like to revisit again in detail at some point in the future.  This is definitely not the "final" version of my homage to Roman history and the Starz! Spartacus TV series in particular, but its what I've collected so far.  I'm certainly looking for more feedback and ideas, so if anything strikes you while reading through this post, please comment or message me.  I'm open to tweaks!

Let's say its late, you're at a friend's house or a convention, and you don't have an adventure ready.  But you know that you and your friends just want to smack the heck out of some poor 0-level characters.  Maybe it's time for a Gladiator Funnel!  The concept is wickedly easy:

That's it.  The players can just start whacking away at each other until the last one is left standing, or the last team wins.  For just a one-shot bout of fun, let the players fight to the last man or woman alive.  Alternatively this could be the start of a new campaign, with the adventure ending in an escape from bondage into the streets of Rome itself.

Of course if the idea of a Roman campaign isn't your cup of posca, you could fit this into just about any sword & sandal campaign.  +Harley Stroh's incredible Escape from the Purple Planet (part of the Peril on the Purple Planet boxed set) has characters fighting to escape bondage on a world akin to Barsoom (but purple!) with a very similar theme.  With a few minor tweaks (and a lot of out-of-print books) you can set this all on Athas, the world from the Dark Sun campaign setting.

Just make sure the elves are 7 feet tall, the dwarves are hairless, and the halflings eat everyone.

When I first started cooking up ideas for this post I was going to break this into three portions: Nationality, Occupation, & Style.  But then I came to my senses, recognizing that Goodman Games already did all the Occupation work for me, and there really wasn't much need for me to "recreate the wheel" with a brand new list of Occupations.  In fact, the idea that you could have a Thracian Halfling Chicken Butcher who is supposed to fight in the Eques style could be a lot of fun!  Certainly something you'd see in one of my sessions.

Obviously if this doesn't work in your own game, you could choose to ignore any demi-human results.  Perhaps at some point I'll come up with a list of Roman occupations, but I'm not there yet.

In the arena, combatants of from the same country tend to fight better alongside each other, and refrain from killing each other off unless absolutely necessary.  When battling a gladiator of the same Nationality, the attacker's action die is reduced by -1D (a d20 becomes a d16).  But when fighting against a common opponent in the arena, two combatants of the same Nationality can increase their action die by a +1D (a d20 becomes a d24).  This can only benefit two attackers at any given time.

(I need to give credit to the DCCRPG adventure guru of guru's +Harley Stroh for helping create these mechanics.  I knew I wanted to use Nationality, but kept going back and forth as to "how".)

To determine a character's Nationality roll on 1d14

A gladiator's chosen style essentially dictates the weapons they wield in the arena.  Some fight with a full suit of armor, and others bare chested.  It all depends on the kind of spectacle the mob demands.  But being assigned a weapon doesn't always mean that a gladiator is the most capable in its use.

It is important to note that any and all gear assigned for the arena stays in the arena.  If you are running a Gladiator Funnel as the beginning of an escaped slave adventure, once the surviving characters return to their slave quarters these weapons will surely be collected by the guards.

To determine a character's Style and Arena Weapons roll on 1d10

Some of the gear listed above is new to the Dungeon Crawl Classics RPG.

Obviously since this is something historical I can't just make everything up on my own.  So here are some of the sources I used to gather this information.