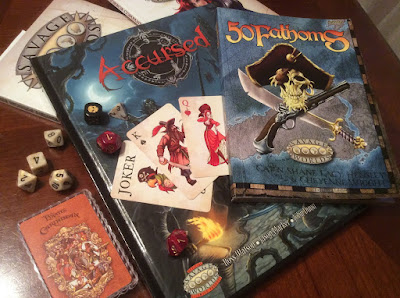 Summer seems to be the time that I kick off the majority of my campaigns, so it should come as no surprise that my "next big game" is beginning next month.  Following a long-term Cypher System Fantasy campaign, I thought we'd switch systems and spend some quality time with Savage Worlds.  While I continue to run mini-campaigns, demos, and one-shots with Savage Worlds, it's been eighteen months since I've run a full campaign, and two years since a campaign with all grown-ups!

In that same amount of time, my Savage Stack of Awesomeness has continued to grow.  Just in the last year alone I've picked up everything for East Texas University, pre-ordered Rippers: Resurrected, and Kickstarted Weird War 1 and Accursed: World of Morden.  At this point, if I don't start using some of these books they are going to come to fuse together in a giant, sentient ball of of jealousy.

But which one to choose?

I've hemmed and hawed about this for several weeks now, but last weekend I finally buckled down and made my decision.  I absolutely adore the Accursed campaign setting, and had a terrific time running a one-shot for my friends online.  But I'm also really itching to give the 50 Fathoms plot point campaign another go, after my wife and kids' lost their ship at sea last summer.  Since I'm always looking for a possible mash-up I came up with...

(Is the name too much?  The first part was my first choice, but then +Jeremy Land mentioned "vampirates" and I had to use it!)

Borrowing the character design and backstories from Accursed, I'm going to throw those cursed monstrous creatures into the fantastic waters of Caribdus.  Swashbuckling and witchcraft and cannons and curses... it's going to be a fun excursion at sea!

As I started to re-read all of the setting materials from both Accursed and 50 Fathoms I realized that I needed to give my players some kind of reference guide for character creation.  There are some clear differences with skills, gear, and certainly setting rules.  For the purposes of this campaign, this blog post will serve as reference guide for my players, and anyone else who wants to see what I mashed together.

For the journey that will take our ragged band of Accursed from the Discordian Sea to Caribdus, we will be using the following Savage Worlds books:

Both 50 Fathoms and Accursed have recommended skill lists for player character creation.  The former is fairly standard and in line with the Savage Worlds Deluxe Edition, however Accursed brings back Guts, boots Boating, and offers Athletics and Subterfuge as alternatives to a wide range of other skills.  For the purposes of this campaign, the following skills are available for characters:


Personally I prefer just having players roll Spirit for fear checks, rather than messing around with Guts. It just seems easier, especially for new Savage Worlds players.  Even though we'll be using monster characters, and there will be some horror aspects, I won't be running this as a "horror campaign."  Athletics combines Climbing and Swimming, while Subterfuge combines Stealth and Lockpicking.  While perfectly suited skills for Accursed, in 50 Fathoms it shouldn't be uncommon that a character would have only one half of each of those skill-combos.

Due to their connection with the Witches of Morden, Accursed can never take the elemental Arcane Background found in 50 Fathoms.  If they want access to this type of magic they will need to find NPC crew members.  Those that bear the Witchmark may only learn Alchemy or White Witchcraft.


It should be noted that we will be using the 50 Fathoms resource system, which includes Gold Pieces in the form of "Pieces of Eight." Edges and Hindrances that bolster Accursed's Acquisition Roll system (a skill-like resource die) should not be chosen.

To help create an exciting and monstrous action adventure feel, I've gone and picked out a series of setting rules from all of the source material. Fans of either of the settings may note that I haven't taken everything from both Accursed and 50 Fathoms, but I didn't want to complicate the game too much. Also, "Savage Intrusion" is new, something that I stole from the Cypher System's "GM Intrusion" mechanic.