Agents of The Estate - Project ESPER 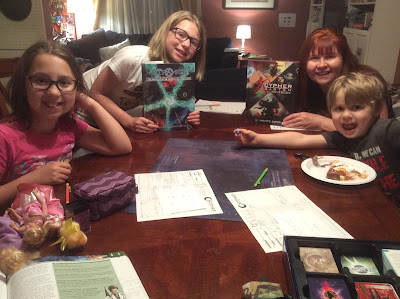 To celebrate my thirty-seventh birthday I told my family that all I really wanted was to play a role-playing game.  I've had a lot of ideas brewing, and this would give me an opportunity to test them out on some willing participants.  Using a vacation day, I spent the morning and early afternoon finalizing my Strange Cinematic Universe, and by evening I was ready to bring everyone to the table.

This blog entry broken down into several sections. 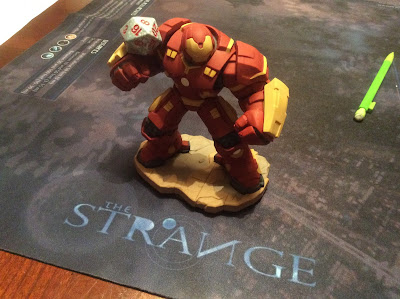 Following the events of my current Cypher System Fantasy meets The Strange campaign, there becomes a way for recursors from worlds other than Earth to retain their powers.  The Estate R&D division learned how to synthesize the power of the Baezedaar Bracers of Ardeyn  creating a special serum (in the form of a cypher) that grants users the ability to permanently retain  recursion laws while undergoing inapposite gate travel.

Official Estate designation for the serum is LB-X3, which stands for "Legendary Baezedaar Experiment #3", however most agents refer to it as "Lawbreaker".  Typically when someone (or something) travels through an inapposite gate, they lose their native laws (magic, mad-science, super powers) in a few days.  But with the Lawbreaker, they can keep any powers and abilities as they travel from recursion to recursion.

Unfortunately, it didn't take the Estate long to learn that they weren't the first to figure out how to engineer Lawbreaker serum.  The shadowy Bradley Cooperative had access to a Baezedaar bracer, worn by the Dragon-God Rhilan.  They created their own serum, and the Estate believes it was released onto the black market to the most powerful criminal organizations in the world.

Faced with this new threat of wizards, dragons, super villains, and mad scientists coming to Earth to take up residence, the Estate decided to start recruiting super heroes.  This new division would be called E.S.P.E.R., or "Estate Supernatural Paranormal Extraordinary Ranger."  Lead Operative Katherine Manners placed star agent Lily "Dance Tank" Hayes (as played by +Darcy Ross in my second playtest of The Strange) as the new chief of ESPER.  Potential ESPER agents and operatives (often just called "ESPER's") were located in their home recursions, given the LB-X3 serum, and brought back to Earth.

ESPER's are specially trained and equipped to deal with the strongest threats that face the Earth.  While the program was created as a direct counter to other super-power wielding forces, ESPER's are often dispatched against threats traveling through inapposite gates, as they wield special abilities for a few days. 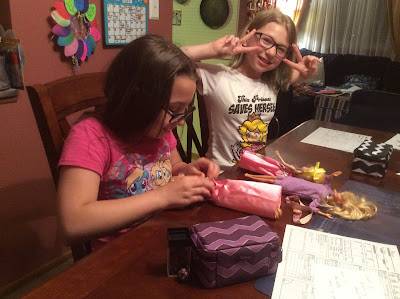 Our family created the following characters for this new adventure:

My wife Jennifer played Megara Parr, once a villain and now trying to become a hero.

Cooper, my five year old, played Ciron Man, his homage to "Iron Man," but with a letter "C" for "Cooper"

Finally Carrie, twelve, came up with The Doodler, a young girl who can bring art and animation to life 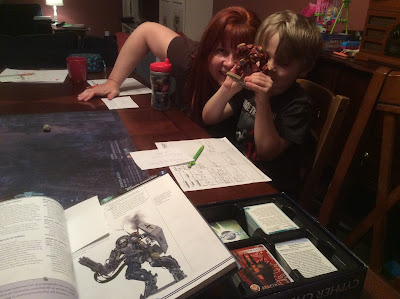 I threw together a quick adventure for my wife and kids, so I thought I'd share the full adventure outline.  Feel free to expand on this skeleton and turn it into something much bigger for your own home game!  I may even give this a shot with a grownup group, or at a future convention. 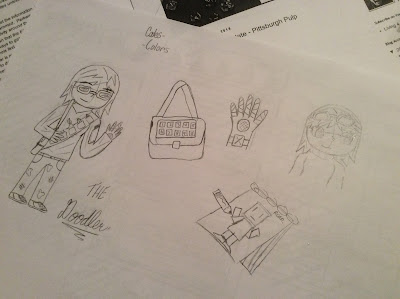 Our local team of Pittsburgh based ESPER's were sent in to capture Dr. Goering and bring him back for questioning.  After braving Parkway East traffic, the team arrived at the scene and tried sneaking into the school bus entrance of the Carnegie Science Center.  The Doodler and Megara Parr made it past easily, but Athena and Ciron Man were stopped by the police, even after The Doodler created a pair of sentient pillows (her duplicate) to soften the cyborg's steps.  Megara tried sweet talking the cop, but he became infuriated and tried to arrest the Clever Speaker.  The Doodler was able to glue the police officer's hand to his cuffs, and the team ran inside the science center.

Once inside, the ESPER's found Dr. Goering working on a strange suitcase while laughing maniacally.  Although a nearby janitor, unaware of the situation, made shooting difficult, Megara Parr fired off some stun gas bullets, taking two of Dr. Goering's guards out of action temporarily.  Since they wanted the Dr. Alive, The Doodler convinced Althena to put an arrow in Dr. Goering's knee.

Megara tried reasoning with Dr. Goering, asking him to come quietly for questioning.  The Doctor explained that he wanted to go to the submarine, but Megara kept him from doing so.  Everything was going fine until the psychic admitted that they weren't planning on killing the Nazi scientist.  Dr. Goering injected himself with a healing syringe and ran off.  Megara, accompanied by The Doodler's pillow-based alter ego, chased down Dr. Goering, and knocked him to the ground.

A firefight opened up, with Megara and the Doodler's duplicate getting blasted by power-armor clad soldiers.  Athena, Ciron Man, and The Doodler made short work of the ones inside the Carnegie Science Center, and by the time they joined Megara, the psychic had the situation under control.  Megara zapped Dr. Goering's mind and made him forget the entire incident.  She even implanted a memory, suggesting that he wanted to accompany the party back to headquarters.

The team was almost done, but they stopped to let Dr. Goering hand off his briefcase.  One of the guards took the case and put it in the USS Requin, causing the submarine to gain power and speed off out of control towards the city of Pittsburgh!  Dr. Goering warned that if the sub impacted a building there would be a great explosion.  Quickly The Doodler drew some jump boots on her feet while Athena fired an arrow, tied off to a rope, at the sub.  The two heroes boarded the craft, and Athena used a shield cypher as a blade to destroy the briefcase powerplant. 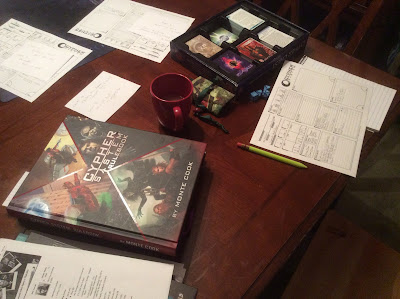 "Have you met my buddy Ciron Man?  He takes care of those who shoot."  - Megara