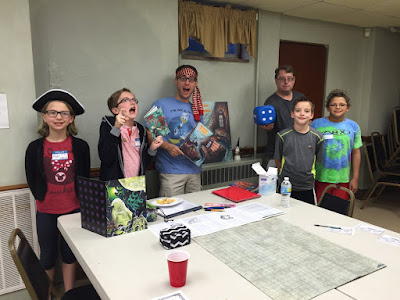 Crawling Under a Broken... Shanty?

Last year I started running Dungeon Crawl Classics with our local game club the Norwin Game Knights here in the Pittsburgh area.  After a few one-shots, we tried Mall Maul, a 0-level funnel by +Reid San Filippo for his brilliant post-apocalyptic campaign setting Crawling Under a Broken Moon.  Something about those characters and Reid's outlandish setting really resonated with my younger players, so we continued the quest into 2016.  Our ragged, post-apocalyptic wastelanders journeyed across Umerica in their custom Dodge conversion van, and eventually followed a portal back to 1877.

By February our table was overflowing, and there were several folks who wanted to play but couldn't get a seat.   Setting our CUaBM campaign aside, two of our players (Evan and Matthew) donned the heavy mantle of DCC Judge and started running their own tables.  In March, April, and at International Tabletop Day we had three tables slaying 0-levels and exploring 1st level game play.

It's truly been a fantastic spring!

For our May event I thought we'd return to our roots, and bring the wastelanders back for another adventure... this time on the high seas! 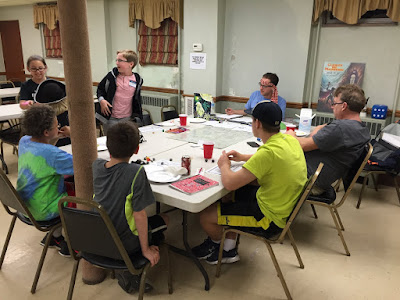 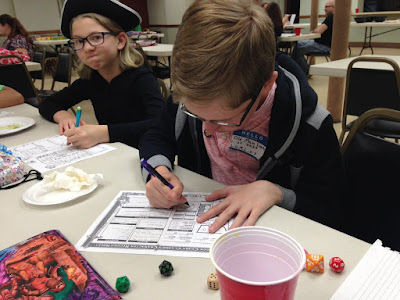 Tower of the Black Pearl, Part One

The Night Train must have been designed by Doc Brown, because it accidentally carries the wastelanders across time and space to a watery, piratical realm known as Caribdus.  When the train sinks into the sea, the time travelers find solace on a desert island, where they meet other scurvy souls.  Captain Jack Sparrow soon arrives, and tells the team that he'll save them, so long as they go into a nearby sunken tower and return with an artifact known as the Black Pearl (not to be confused with his ship, also called the Black Pearl.)

The scurvy wastelanders infiltrated the upper level of the tower via a small dinghy, slaying the pirate guards with ease.  Traveling down through the tower they uncovered a room full of candles linked to lawful adventurers.  It was here that Lord Old Man Legolas of Ikea accidentally made contact with the dark lord of magic, the one, the only Sezrekan.  Taking the old one as his patron, Legolas made some kind of pact but kept it from the rest of his associates.

After fighting with a quartet of evil, stone fetish-figurines, the scurvy wastelanders used a grappling hook and rope to descend into a room with three archways.  It took some time, but the adventurers learned that these were magical portals, powered by blood, after Dylan the Animal Trainer sacrificed his pony and poured the blood all over one of the arches.

The portal created by Dylan led the scurvy wastelanders into a chamber situated far below the tower itself.  It was there that they did battle with another merry band of pirates. 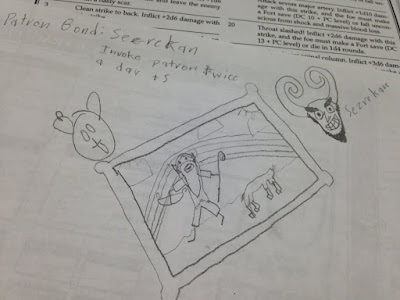 "I'm a thief, and I shot a deputy."  - Scrooges McDucks IX describes himself to one of the scurvy newcomers.

"We should've gone with the grappling hook!" - Lithium Shield screamed as he was beset upon by demonic figurines.  He wanted to climb down the side of the staircase, but Scrooges McDucks IX insisted on touching the figurines.

"Like Sezrekan's children, they laugh!  A combination of the Pillsbury Doughboy and Chucky." - Craig got a kick out of the twisted figurines.

"Does anyone want to remind me of what 'his' name is?" - Evan couldn't remember his brand new patron Sezrekan's name.  This had negative ramifications in the game.

"Go get the bag of dice, these aren't working for him." - Whenever Craig's son Dylan rolls poorly he makes him swap out his dice.

"Dad, is this like golf, where the lowest number wins?" - Carrie's dice were not agreeable this night.

Evan - "Look at your characters, and tell us if you have anything useful."
Carrie - "I have the Mona Lisa."
David - "I have a pony." 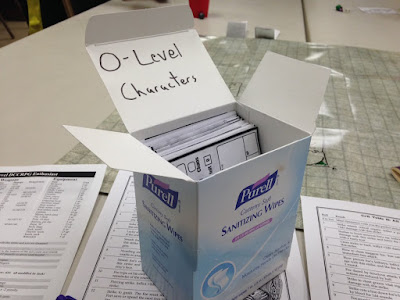