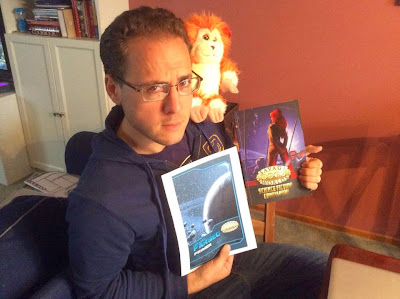 I considered writing a full-length, self-congratulating post to celebrate, but maybe I'm getting too old for that kind of entry.  100 posts seemed like a miracle, and 200 like a decent achievement.  But now this is such a habit that 300 felt like an inevitable milestone.  Nonetheless, 300 seems like a very fitting marker for some upcoming changes in my regular gaming!

Barring some completely bizarre derailment, our Cypher System Fantasy campaign will be wrapping up next week in some kind of epic finale.  It's been a great ride, but since I'm a terribly mercurial game master, I'm always excited to start something new.

I should note that I'm seriously considering taking a step back to be a player for a while, so this entire post could be just a big waste of energy.  If one of my friends runs a series of adventures, who knows what kind of mood I'd be in at the conclusion?

But I feel like I owe it to myself to go through the thought process, just in case.  So I've spent the last few nights going through old notes and wish lists, looking for something new and shiny.

Every time I go through this process I have to fight my natural urge to go back to something completely familiar.  I'm always tempted by nostalgia, but I own an ever-growing stacks of un-played and under-played gaming materials that haunt my dreams.  Whenever I get to this point I try to think about settings and campaigns that I've always talked about but never executed properly.

Let me tell you a little about what's cooking in my head.

Back in the summer of 2001 I kicked around ideas for an Alternity: Dark Matter campaign where the players would eventually face an alien invasion in three parts:

None of these eras are very original, and all have been done before by other television shows, movies, and games.  But typically stories done in these various mediums only focus on one period.  Any kind of alien activity in "The X-Files" takes place during an age of rumor and conspiracy, most definitely Pre-Invasion.  "V" and "Independence Day" reflect two very different styles of invasion, one appearing benevolent and the other decidedly direct, with neither benefiting humanity.  "Falling Skies" dealt with the post apocalyptic aspects of an alien invasion, with humans acting as guerrilla fighters against their new oppressors.

My goal would be to follow a story, or series of stories, through all three acts...

In [UNNAMED ALIEN CAMPAIGN SETTING] the player characters would begin with very minor special-abilities, perhaps just being exceptional humans, serving as an organized resistance.  They investigate alien abductions, counter cult activity, and try to cement alliances with organizations.  This part of the campaign was very inspired by "X-COM Apocalypse", my go-to alien-hunting game between 1998 and 2001.

During the second and third acts the characters would develop.  Perhaps they would remain low-powered super-heroes, or maybe they would find ways to infuse themselves with alien energies.  If nuclear weapons or alien bio warfare were used in the conflict I could have a reason to throw in some X-Men style mutations.  A few dashes of power-armor could be a lot of fun to play with as an homage to one of my favorite 1990's cartoon shows "EXO-Squad."

I never got very far with the development of these later ideas because the campaign never got off the ground.  It's remained as some simple notes in a few journals on my bookshelf.

It appears as if I'm in for a summer of super heroes and aliens, which is why I'm considering reviving this old project.  Our family is doing a Marvel movie marathon this weekend, catching up so that we can maybe see "Captain America: Civil War" next week.  "Independence Day: Resurgence" comes out later this summer, and I went stark raving mad over the original, seeing it seven times in the theater!

On the gaming front I'm playing through X-COM Enemy Within, since I've only finished the "Enemy Unknown" campaign when the game came out a few years ago.  Here's hoping that X-COM 2 goes on the Steam Summer Sale soon.

With all this potential inspiration, and since Cypher System Fantasy is winding down, the timing could be perfect for an alien invasion style RPG campaign.  I'm pretty sure I know what I would want in a reboot of my [UNNAMED ALIEN CAMPAIGN SETTING] concepts, as well as what I want to stay away from.  Although this idea is in its infancy, and definitely subject to change, here's what I have so far:

I was initially tempted to try this out as a sequel to Quattro con Carnage.  Open up with Alternity and then progress into Savage Worlds and the Cypher System.  That could be cumbersome with the technology and super power rules being so different in each system, and I don't even know that many people who still remember how to play Alternity.

I think it's safe to say that I'd be using either the Cypher System or Savage Worlds, both of which could give the players different experiences.  It would be a very hard decision, and one that I'd probably leave for the group...

... I wonder if I could pull of a Dungeon Crawl Classics 0-level funnel too... hmm.

I truly don't know how far this is going to go.  If I end up taking a break from the GM'ing, I could return to the role ready to play something completely different, like Deadlands or Edge of the Empire or more Numenera.  As I've mentioned in previous posts, I suffer from that terrible malady defined by +Ron Blessing  as "Ooh Shiny Syndrome."  Just ask my players!

But if I could take the time to cobble together a fun and action packed aliens vs. super heroes setting, this is what I'd do.

As always, I'm open to comments and feedback!  If you've run a similar campaign, I'd love to hear about it.  Also, if you have any other resources that you think I need to check out, please let me know where I can find them.