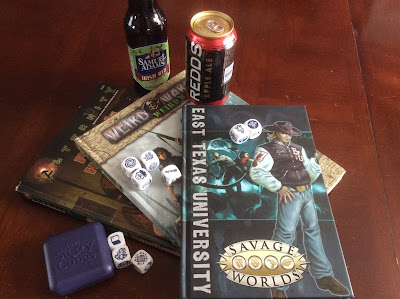 A Mash-Up Too Far

Last night, I may have hit that boundary, and maybe even broken through to the other side of ridiculous.  I warned of "jumping the shark" on Twitter just a few hours before the game, and while I made the post in jest, it was fairly accurate.  Granted, I've been able to throw some crazy mash ups together quite effectively.  To date, blending Dark Sun with Star Wars in The Strange remains my best concoction.  But last night I learned a valuable lesson:

Good mash ups require planning and concentration.  Lacking either can lead to a hot mess.  Albeit, a very fun hot mess.  Add alcohol, and the fun hot mess becomes a crazy haze of laughter, dice rolling, and very inappropriate jokes.

In our last session of East Texas University, three college freshman accidentally drove a Best Buy truck full of XBOX's through a Nazi time portal.  Lacking any good ideas for a follow up adventure, I decided to leave our fate to chance.  So I broke out the Doctor Who Rory's Story Cubes and got the following result: 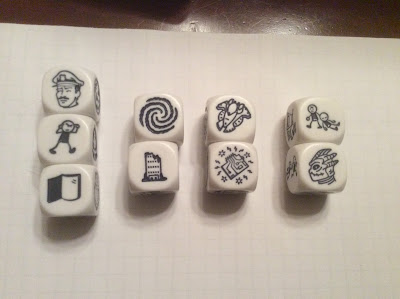 From this I derived the following plot:

At a secret Nazi base hidden within the frozen north of Norway, Doctor Josef Heiter Sr. works at a lab on something called "Operation Grey Hawk."  This operation involves the restoration of a crashed alien vessel (Fraal), and the dissection of the remaining grey aliens.  Dr. Heiter is furious that his program is not working, and has been relying on what he can glean from "Hector" the last living alien, but the alien is resisting all interrogation.

The secret base also houses the Nazi time travel and rocket pack programs.  With the time travel portal destroyed, the PC's would need to find a way to either restore the portal or escape the base using another means of transportation. 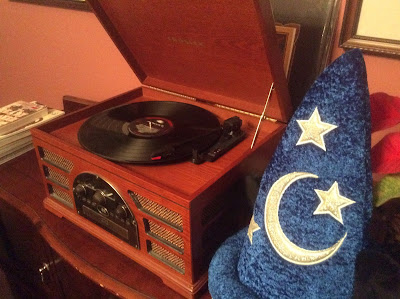 With any hot mess, this one was a bit complicated.  What I can remember is this...

The college students crash the Best Buy truck into the secret Nazi base, destroying the time portal.  Also in the room are a pair of OSI operatives, hidden in an air shaft in the ceiling: Cordeleone and Big Franc.  The college students, aided by the OSI operatives, eliminate the Nazi soldiers in the chamber.  Cordeleone takes a beaker of alcohol, lights it on fire, and instantly immolates a pair of soldiers.  Ezra and Big Franc both play sniper in the scene while Chaz laments at lacking combat skills.

Once defeated, the team investigates a nearby hanger holding a flying saucer marked with  swastikas.  The hanger is full of 21st century technology stolen from Best Buy.  Refrigerators, TV's, crates full of Meg Ryan movies... everything the Third Reich needs to conquer the world.  If only they could get the flying saucer to work.  Big Franc grabs a grenade, tossing it at the Meg Ryan videos, causing a distraction that allows Cordeleone to get close to Dr. Heiter and the saucer.  Then she runs back with the rest of the team.

That's where things get dicey.  The party finds some Nazi uniforms and they all put them on.  Then they split up.  Chaz and Ezra go and free "Hector" the alien creature who originally piloted the flying saucer, or as he called it the "Beep Beep."  Big Franc then goes and cuts off the hands of the four dead soldiers, and throws them back in the hanger, getting the attention of everyone.

[I do not know why this happened, but in some alternate universe someone was really enjoying their Red's Apple Ale.]

A firefight ensues between Big Franc and the soldiers.  Remarkably he is only shot about six times, and Ezra is able to assist in holding off the attackers.  The rest of the team sneak Hector to the flying saucer, just as Cordeleone cracks the code on the side of the vessel, gaining access.  The alien grabs the controls, and exterminates the rest of the guards in the room.

The college students and OSI operatives then grab the wounded Big Franc, and leave the base in the flying saucer. 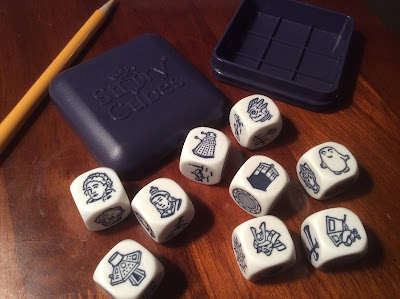 "For some reason I've been thinking a lot about the Dirty Sandy Duncan." - Jen's always thinking about that DSD.

"Big Franc needs a big cigar." - I don't remember who said this, but it was fitting.

"If I drop kick the grenade, will it blow up?" - Apparently Jen has never seen a war movie.

"Meg Ryan was their Aryan ideal." - Jeremy was quite perceptive.

"Herr Doctor, would you like a Sandy Duncan?" - Cordeleone can be very enticing.