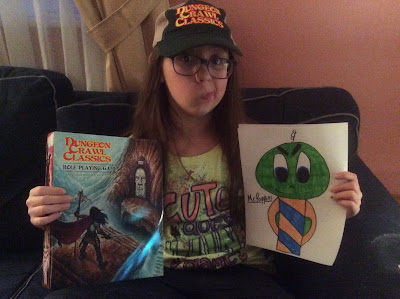 Several weeks ago my eldest daughter Carrie and I concocted a terrifying new monster for Dungeon Crawl Classics:  The Four Leaf Loather.  But Carrie wasn't the only kiddo to come up with a monster that week.  After finding out that their older sister got a monster featured on Living 4 Crits, Evie and Cooper both got to work for their own submissions.

I told both Evie and Cooper that they would need to come up with their own special attacks, and promised to find some kind of mechanic to make them work no matter how crazy they seemed.  Surprisingly neither kiddo went with anything too powerful, but the ideas are still quite outlandish.

For this submission, we're going to be taking a look at Evie's submission... 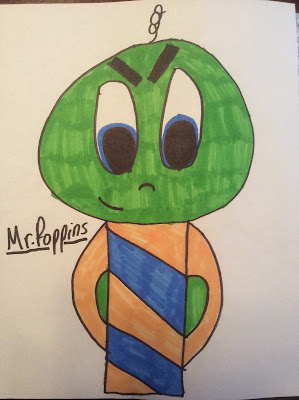 That's right!  The terrible, no good, fearsome, most evil of all creations that bear the Poppins name.  When I saw the picture, I was pretty sure I was staring at some kind of deranged lollipop.  A biting, boomerang hair launching, invisible, "head on fire" lollipop.

Special Abilities  (Created with Evie sitting right next to me)

Mr. Poppins used to be a young lollipop kid but he took one step too far into Candy Cane Village.  For months he thrived on candy cane pieces and milk.  One day he found himself a deal he couldn't pass up.

The Candy Cane Lord came upon him and said "You lollipop scum may come to great use one day.  How about you come with me and I could give you everything you want from food and water, to a roof above your head."

Of course Mr. Poppins agreed, not knowing the consequences.  The Candy Cane Lord quickly bit his head, taking out all the good and adding dark thoughts.  Mr. Poppins soon escaped away one day as a vicious killing machine.

[Judge's Note:  Seriously, Evie came up with all of that.  So proud!] 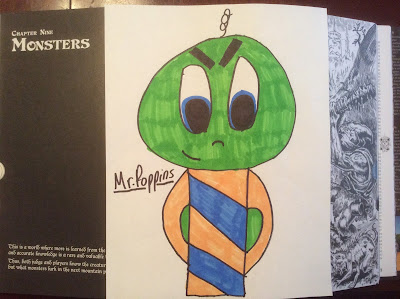 To help clarify just what Mr. Poppins is, I thought I'd give Evie a quick interview:

Judge James:  So Evie, who exactly "is" Mr. Poppins?

Judge James:  Why did you create an evil lollipop monster?

Evie:  Because that day... I ate a lollipop.

Evie:  Because he pops up everywhere and bites people.

Judge James:  Where exactly is the "Candy Cane" village, with regards to other fantasy worlds?

Evie:  It's five miles away from Nihliesh*

Judge James:  Where would you encounter Mr. Poppins?

Evie:  Everywhere!  He pops out of the bushes and bites people.  You never know where he's gonna be, so watch your back.

Judge James:  If Mr. Poppins was here right now, what would he say?

Evie:  Hi, how you doin'?  Can I interest you in a bite-tastic brunch?

*Nihliesh is in the Ninth World of Numenera, home to our Disenchanted Tales adventures.

If you are looking for an evil, stealthy Lollipop to infest your adventures, maybe you should give Mr. Poppins a try.  If you do, please let us know how he showed up in your game!  Evie would be thrilled for the feedback (as would I).