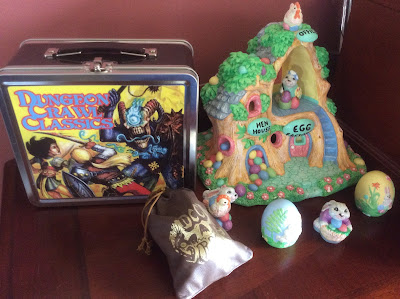 We don't do regular holidays in the Walls Household.

To celebrate the Easter holiday this weekend, we decided to a "Dunkin & Dragons" morning.  This little Walls-Family tradition began way back in the summer of 2014, when we would play Basic Fantasy RPG while consuming copious amounts of fried donut goodness.  Although the game has changed a bit since then (now we're playing Dungeon Crawl Classics) the concept remains the same. 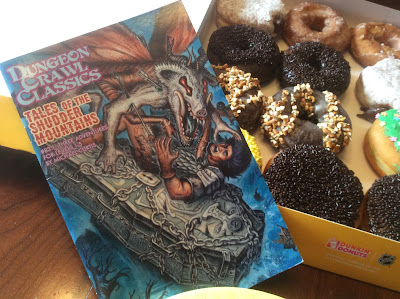 Originally we were intending on running Moonricket Bridge with our gang of Family Game Knights friends, but Carrie was sick last night and we didn't feel it was fair to have guests over.  Since the adventure is so short, though, I thought we'd run it as a family game.  When we next meet as a full group I'll pick up with Doom of the Savage Kings. 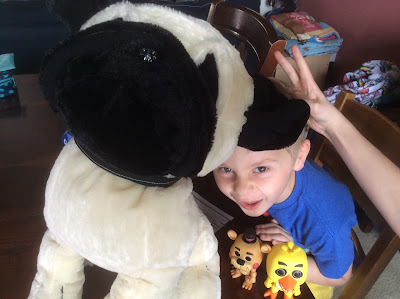 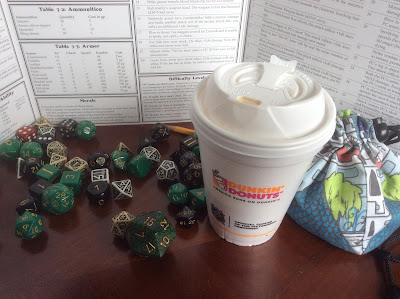 After removing the curse at Sour Spring Hollow, our brave band of adventurers set out to find the town of Hirot, said to be one of the few larger communities in the Shudder Mountains.  Sour Spring Hollow was out of the way, and the only road to Hirot would require a crossing of the haunted Moonricket Bridge.  The evening before reaching the bridge, the characters shared a meal at a small cabin with a trapper named Robert Duvall.

Robert Duvall shared the tale of the bridge's ghost, and how he had been slain by robbers just before his wedding.  A great reward awaited those who could free the bridge of its curse, and send the ghost on to an eternal peace.

The next morning the party reached the bridge and encountered the ghost.  Wize Wizard McBride was terrified of the spectral entity, however the brave Jefff (yes, with three "f's") was without fear.  Jefff approached the ghost and saw that it was motioning downriver, first pointing and then with an open hand.

P. Specs led the party downriver where they found a small, debris filled cove that led to a cave.  The group found the remains of a deceased questing knight, and took his weapons and armor.  Everything was going great until Sun, the Elven Musician, started cutting up the guts of a dead deer carcass.

The smell of the decaying meat attracted a trio of Giant Hellbender Salamanders.  Unfortunately, the team was not outfitted correctly for the battle.  Their farming implements and poor armor were of little match for the three terrible beasts.  Sun fell during the battle, and Wize Wizard McBride was knocking on death's door.  P. Specs successfully backstabbed the smallest of the creatures, and eventually, Jefff was able to land a few killing blows on the last two.

[Judge's Note:  This was a BRUTAL battle.  I think we went about seven or eight rounds, with the average attack roll being less than a six.  In addition, Jen's character kept racking up disapproval, and the team had several fumbles.  I'll admit that I fudged a die-roll once just so that Cooper (my six year old) wouldn't lose his second PC in the same game.]

Inside the cave the party found the remains of the ghost's body, including a tiny, plain wedding ring.  The party retreated to the ghost and returned the ring.  The ghost bowed in thanks, and then walked several miles to a small abandoned cemetery where it was reunited with the ghost of an old woman.  The two specters embraced in love, and faded out of existence with the ring dropping to the ground.

So moved was the Wize Wizard McBride, that he acted against his alignment and agreed to bury the ring in the cemetery rather than remove it in greed.  Unfortunately his chaotic god of death and disease cared not for this moment of beauty and respect.  Wize Wizard McBride changed alignment, was stripped of all his cleric powers, and found himself "without deity." 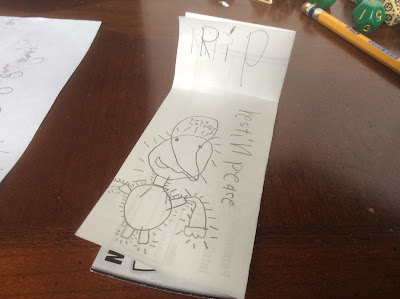