Lamentations of the Flame Princess - A Not-So-Quick Review 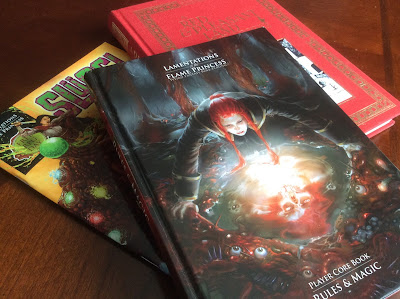 First off I'm going to be honest:  I don't know if I like the title to this mini-review series.  I've said it before -  I suck at reviews.  Despite having the slang term "crits" in my blog's name, it doesn't mean I'm any good at being critical when it comes to the books and gaming products I read, especially when I enjoy them...

... and hot damn, I really enjoyed reading Lamentations of the Flame Princess by +James Raggi!

I guess it comes to down to the fact that I won't finish reading something I don't like.

Anyway, I really wanted to write something about LotFP after reading it, as I felt inspired.  This "Not-So-Quick Review" is sort of a spiritual successor to my incredibly short lived Why You Should Play series of posts.  I'm going share and showcase my five favorite parts of Lamentations of the Flame Princess and if you agree or disagree or feel the need to scream crazy obscenities into the internet, you can do so in the comment section below.

Originally I intended this to be a rather short post, but then I just kept writing... and writing.  That's why it's "Not-So-Quick".  If you have a better idea for a blog series title let me know in the comments.

Lamentations of the Flame Princess

I first across this game during the spring of 2015.  I had been playing several OSR games at the time, including Dungeon Crawl Classics, Adventures in the East Mark, and Basic Fantasy RPG, and I kept hearing folks in the community talk about "LotFP".  What the heck was that?  So a little Googling and I came across the free, no-art version of the Lamentations of the Flame Princess: Rules & Magic PDF.  I gave the book a quick glance, and found that the rules seemed pretty similar to some of the other games I was playing, with some entertaining tweaks and tidbits that I'll get to later in this post.

A few weeks later I set out to get my own copy of the Lamentations of the Flame Princess: Rules & Magic in print.  Interestingly enough, one of my Google+ contacts saw my interest and made me an offer.  If I paid for shipping they would send me their copy of the book.  While they had no issues with the game, the art was too over the top.

Hold up... any game that has artwork that can cause that kind of reaction with another gamer needs to be in my hands!  I had to check it out.  So I made the deal, and also managed to wrangle a copy of A Red and Pleasant Land by +Zak Sabbath because I thought "Alice in Wonderland" and "hey I like Disney movies."

When the book finally came, I opened it up and saw just what my friend was talking about.  There is some very intense, mature artwork in this book, depicting some wild scenes.  If you are wondering if you would enjoy the artwork, you need to ask yourself two questions:

If you answered yes to either of these, then you'll probably enjoy the art.  I should note that the book is very clearly listed as "18+" for "Explicit Content".

Sadly, the book ended up going on my shelf for about a year before I opened it up again.  I have a terrible backlog of gaming products that I need to read!  It would be my wife +Jennifer Walls who'd play first, taking part in a demo of No Salvation for Witches that our friend +Shannon Slakinski ran as prep for Gen Con.  I was wrangling the kiddos that night so that she could play, so I was only able to hear a few tidbits of the game.  I knew I would play eventually, I just needed to find a little time.

Well I finally found the time!

In a little over two weeks I will be running Lamentations of the Flame Princess online on behalf of Lawful Good Gaming.

At it's core, Lamentations of the Flame Princess appears to have seven classes:  Fighter, Specialist, Magic-User, Cleric, Elf, Halfling, and Dwarf.  At first glance, the Specialist was just another name for a thief or a rogue, and this is what I thought when I first read the free PDF in 2015.  But upon fully reading through Lamentations of the Flame Princess, I realized that the Specialist allows for a great deal of flexibility for creating characters that aren't necessarily the front line fighter, yet lack magic.

Specialists have access to nine skills, from Architecture and Bushcraft to Stealth and Sneak Attack.  As PC's progress, players can put points towards any of these skills in any fashion that they desire.  Couple this with the fact that there are no alignment or weapon restrictions in Lamentations of the Flame Princess and the Specialist can fill at least a dozen individual niches.

Here's just a few I came up with on the fly:

If it weren't for one single spell (that I'll discuss momentarily) I think I'd always want to play some kind of Specialist variant myself.

Lamentations of the Flame Princess has rules for all of that.

For all my years playing AD&D 2nd Edition, with all of its rules for land owning, and castle creation, and bringing on hirelings, it wasn't until I started dipping into the OSR that I had players who actually wanted to manage some kind of property.  It was in my monthly Dungeon Crawl Classics campaign, after the party evicted a dastardly river bandit-king from his keep.  Unfortunately, the DCC rules didn't have enough on the topic, so I dipped back int my old Dungeons & Dragons Rules Cyclopedia for some details.

Lamentations of the Flame Princess: Rules & Magic has some very clear and concise rules governing all of these topics, from adventuring on the high seas to paying taxes for owning a keep or castle in another lord's land.  I really got a feeling that LotFP shines in sandbox style gaming.  What better sandbox than to let players create their own kingdom, and then have them role-play how they deal with the ramifications?

Imagine a game where a first level spell can destroy an entire campaign.  Lamentations of the Flame Princess is that game.

Summon is a first level Magic-User spell that, on the surface, allows the player character to summon a beast to fight on their behalf.  Perhaps they can summon a boa constrictor to strangle their arch nemesis.  Or maybe they roll really well and summon a living shadow to do battle with a mass of orc raiders.  Or maybe, just maybe, they summon an "Imaginary Equation, Incorrect yet True" and all of mathematics breaks down and the universe implodes.

This can totally happen in LotFP.

I really can't do the spell justice, so go download the PDF right now and read pages 134 - 143 (yes, it's nine pages, and all nine pages are awesome.)

Summon is proof that magic in LotFP is terribly dangerous, and can alter the world in some serious ways, often by accident.  Sure, Dungeon Crawl Classics has some spells that can cause total carnage if a player character spellburns and blows all of their luck, but chances are that they won't submerge the entire world in fifty feet of water if they blow the spell.  Each and every casting of that kind of magic can lead to adventure plots created by player character actions.

Crit #4:  On the Topic of Railroading

On page 11 of the Lamentations of the Flame Princess Referee Book +James Raggi starts to cover adventure design.  He lays out the process of creating your own adventures as well as the types of weird adventures that can be had in with this Weird Fantasy Role Playing Game.  Even though I've been reading, writing, and running RPG adventures since the early 1990's, I always find it eye-opening to read someone else's take on the process.

It was the discussion of "Railroading" (forcing players down a particular adventure path) on page 20 that I found to be of particular interest.  Mr. Raggi asks the reader to repeat and say aloud the following (twice):

"My adventures and campaigns will have no pre-set endings.  Characters are not required to act as I wish them to act during the course of the game.  It is natural player behavior to trash scenarios and take the game to places unforeseen."

Great advice, and not just for new GM's, but for any and all who lurk behind the screen.  Crap, I need to catch myself, especially when I'm running games for younger players and I want to ensure that we get done on time.  Perhaps I'm doing a disservice when I shoot for bringing our game in for a nice and tidy landing at the end.  Just based on reading the LotFP adventure design setting, great adventures should lay out what a problem is, and then give the players the full ability to create thoughtful and creative solutions.

Of course, these creative solutions may be fatal to the player characters, but without risk, there is no reward!

There's a complete section in the Lamentations of the Flame Princess Referee Book that's titled "Other Topics" that really should be called "Role-Playing Organizational Management 101."  The topics include but are in no way limited to player recruitment, setting player expectations, replacing deceased characters, and examining and being critical of your play style as a referee.

In short, pages 62-68 of this absolutely free PDF should be required reading for any new starting out on their path to create a campaign.  Heck, if it weren't for the art depicting eyeballs getting stabbed by knives, I'd print this thing and give it to all of the teen GM's who run games at our local game club.  While I'm perfectly comfortable letting my own kids see a little harmless gore, I can't speak for all parents.  What I'd love to do is print this out, go back in time, and give it to the thirteen year old version of me.

"Ask your friends to join your game.  ALL of them.  Even people you don't know all that well. Co-workers.  Classmates.  One of the worst things people can do is only game with close friends.  This often cripples one's ability to find a game, as if these certain other people don't want to game, that's it."

Guilty.  Until just the past few years (2012+) I fell into this trap repeatedly.  I'd limit myself to asking just a close selection of friends to join my game, and then when I'd lose a player, or a group would collapse, I'd lament that none of my other friends were gamers.  Thankfully, between frequenting an amazing FLGS and the advent of the internet, gaming with strangers is easier than ever.  I've created dozens of friendships in the process, and with every event and convention seem to create a few more.

But if you want to be a referee, judge, or game master, you need to put yourself out there and market your game.

LotFP at Your Table

These are my critical hits from Lamentations of the Flame Princess, and I'd be interested to hear how some feel about the game.  Have you played LotFP, and if so, what were your impressions?  How did you enjoy it compared to other OSR games?  If I was looking to pick up some more LotFP products, where should I start?

Feel free to comment below!
Posted by Living 4 Crits at 4:01 PM