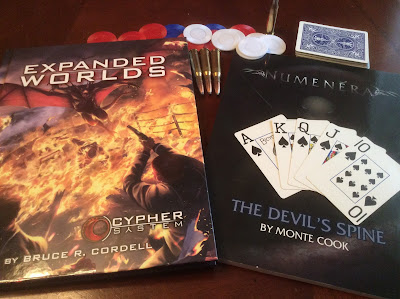 
What do you do when you're in the mood to run a Weird Western like Deadlands, but you're in the middle of another campaign?  Thanks to some tips from Expanded Worlds, the new Cypher System rulebook that showed up at my house last week, I decided to mash some of that western goodness into The Devil's Spine.  All it took was a little reworking of The Mechanized Tomb, the second "adventure" within The Devil's Spine that covers a quest for an artifact known as the Impossible Blade...

... I wonder if its related to the Zephyr Blade?

To do this I inserted a numenera discovery called "Doctor Kell's Kairological Tether Translator"... a bit of a nod back to my old Savage Worlds: Clockwork campaign from 2012-2014.  With a few dashes of The Strange, and an emphasis on the concept of "translation," I came up with a way to allow my players to change foci when moving backwards in time as well.

Okay, let's get into the meat of this story.

When we jumped back into the game last night, we started with some light shopping.  The PC's needed gear for their trip across the Cloudcrystal Skyfields.  All the players needed to do was purchase or steal a few riding animals, or at least buy enough gear to last them five or six days of walking.  That's it.  Make a purchase and move on.  But not my players.  This whole "ordeal" took about thirty minutes of discussion.

"Will I get saddle-rash riding an Aneen?"

Dammit, guys, just buy your gear and get moving, we only have three hours to play!

The only thing I really told the crew was that walking through the Cloudcrystal Skyfields could be dangerous, especially if they were riding up high on weasel-giraffe hybrids.  Weasraffes.

What, you want stats for Weasraffes?  Fine.

Weaseraffe: Level 4, 12 health, Damage 6 (bite), Intellect based perception rolls made by riders are at -1 difficulty because these bastards are super tall.  Level 2 when trying to navigate flying shards of killer glass in the Cloudcrystal Skyfields.

Fortunately, for the sake of time, I was able to get everyone moving.  The PC's were "aneen-less", and hoofing it on foot.  During the way, I chose to use GM Intrusions as the mechanics for setting up particularly interesting random encounters.  I also fell back to my Madlib format.

From Andy's answers, I came up with the first encounter: a green colour parasite.  Essentially a frisbee sized, floating shard of crystal passed in front of the moon, causing a green light to wash over Andy's character Belmodan.  This green colour burned and didn't go away.  The colour itself was an organism (that's why I keep putting a "u" in the word... gotta make it proper) and Belmodan used a cypher to stun it, removing the parasite.  I got the idea out of H.P. Lovecraft's "Colour Out of Space", and had used something similar back in Clockwork.  Felt right.

When it was time to hit Will's character Ruun, I asked him the following questions:

From Will's answers, his character came across a harmless, lizard-apede while hunting.  This "Dleifteh" (Level 2 creature), was filled with liquid metal, so after Ruun cut it open with his sword staff, the goopy metal-blood ruined his weapon.  At least the legs were tasty.  But this was Ruun's second weapon now ruined by a GM Intrusion.  Poor dude.

In hindsight, I really like this method of generating GM Intrusions.  I'll be using it again.

Eventually the PC's found their way to Eenosh's hut, but discovered that the Navajin (Eenosh is a humanoid creature, go look up Navajin in the Numenera corebook) was being held hostage by a small troupe of Chirogs - dangerous, savage abhumans who enjoyed eating and wearing human flesh.  PL4T0 would be the first to make contact with Eenosh, as the floating bot was of little threat to the abhumans.  PL4T0 made a deal with Eenosh: take care of the Chirogs, and they would be given access to the busted Impossible Blade.

Apparantly Eenosh had already aquired the Impossible Blade, but it had been turned to dust after it was removed from a temporal stasis pod.  It's kind of like that Mel Gibson movie, Forever Young, when Mel Gibson's character goes to the future but time catches up with him.

I really though the fight with the Chirogs was going to take a lot longer.  All six of the creatures had 15 Health and 3 Armor.  But I didn't count on Belmodan's Electric Bolt Artifact and Ruun's teeth.  Seriously, Ruun just ran up and started chewing on the creatures, doing over 10 damage per round!  True, he had been spending a lot of effort on damage, but dang!

Once the Chirogs were dealt with, the party got a look at the dusty Impossible Blade.

After all that fighting the party did some raiding of the Chirog yurts, and found some cool gear.  Eenosh gave them a few cyphers as well, and a kickass gravity nullifying artifact.  He also gave them a stone thuman doorstop with organic, working eyes.  Marc called it a "Living Dorbz".

It was about this time that Eenosh told the tale of the busted Impossible Blade and the amazing Dr. Kell.

Apparently the blade had been discovered in the ancient and decrepit ruins of Queen Starloscet's tomb to the west.  The ruins were once a great source of the numenera, and even with temporal stasis shielding had aged over millions upon millions of years.  Unfortunately, the Impossible Blade, having been left somewhere in the ruins, was no longer of any use.

Eenosh spoke of a Dr. Kell, a strange and rakish time traveler who studied "Kairological Tethers".  Unlike Chronological time travel, that allowed travelers to go to any point in time, Kairology was the study of two points in time moving at the same speed, and connected through a temporal tether.  Kind of like a time-wormhole.

This whole thing was another nod to my old Savage Worlds: Clockwork campaign, Dr. Kell being a major NPC.  Perhaps this is all the same universe!

Dr. Kell was an explorer of the Ninth World, believed by some to be a Gaian, and wanted by the Order of Truth.  He first visited Eenosh a couple years prior, and had been in the Cloudcrystal Skyfields just a few weeks ago.  Apparently there was a tether-point by an old creek nearby.  According to Eenosh, Dr. Kell came from a time where the tomb of Queen Starloscet was more contemporary.  When Dr. Kell went back to his original time a few weeks earlier, he took with him a man named Burris, who was of the Ninth World.  Fortunately for the PC's, Dr. Kell had left behind one of his Kairological Tether Translators.

When Nero examined the Kairological Tether Translator with his time-esotery he learned the following:

So the party dragged the device out to the creek bed, bid Eenosh goodbye, and turned the machine on.

The characters were immediately struck by some kind of temporal distortion, and were then teleported back in time. When they awoke, they were all in some kind of stream, full of rushing water.  As each climbed out, they came across four bearded humans, panning for material at the edge of the stream.  Ruun scared the humans away, but when he returned to the party, they all started to feel as if time was returning to them.

This Kairological Tether Translator not only brought individuals from one point in time to another, but it bestowed upon them surface memories of their new time and place.  The PC's were no longer in the Ninth World, but in the year 1879... in the state of Colorado.  Nero, Ruun, and Belmodan all had different skills and abilities, but PL4T0, being that he was a floating bot, didn't change at all.

If you think I went and leveraged the shifting focus aspect of The Strange you're absolutely right.  I love that mechanic!

The Kairological Tether Translator was nowhere to be found, and Belmodan was starting get upset.  Actually it was Andy who was getting upset, not his character, as all of his skills were based on Numenera and not the Weird West.  That's when I told the players about the prospectors.  Those rugged folks weren't panning for gold...

... they were panning for bits and pieces of numenera!

There goes the canonical story line of The Devil's Spine!


"It's an aneen with bowel problems..." - Will describing the Impossible Blade.

"Didn't we already do a razor sharp plain of glass?  We have high heels for that." - Will describing the Cloudcrystal Skyfields.

"I've got 75 shins from selling a little dude!" - Andy reminiscing about past sales.

"You think it's a good deal until you find out your arms are cleaning out some fat guy's fold mucus." - I can't even remember why Marc said this.

"You know there's a saying: you never buy an Aneen without looking at its butt." - Marc knows how to find the best deals.

Will - "I'm gonna show this guy the right way to tear someone's guts out with your teeth!"
Jim - "You work him like an ear of corn!"

"I like the heels on that one barbarian." - Eenosh to PL4T0.

"I should've made the freakin' Impossible Blade a Slap Chop." - Jim's regrets.

"In this case, the Devil wears Chirog?" - David about the new headpiece for Will
Posted by Living 4 Crits at 6:31 PM